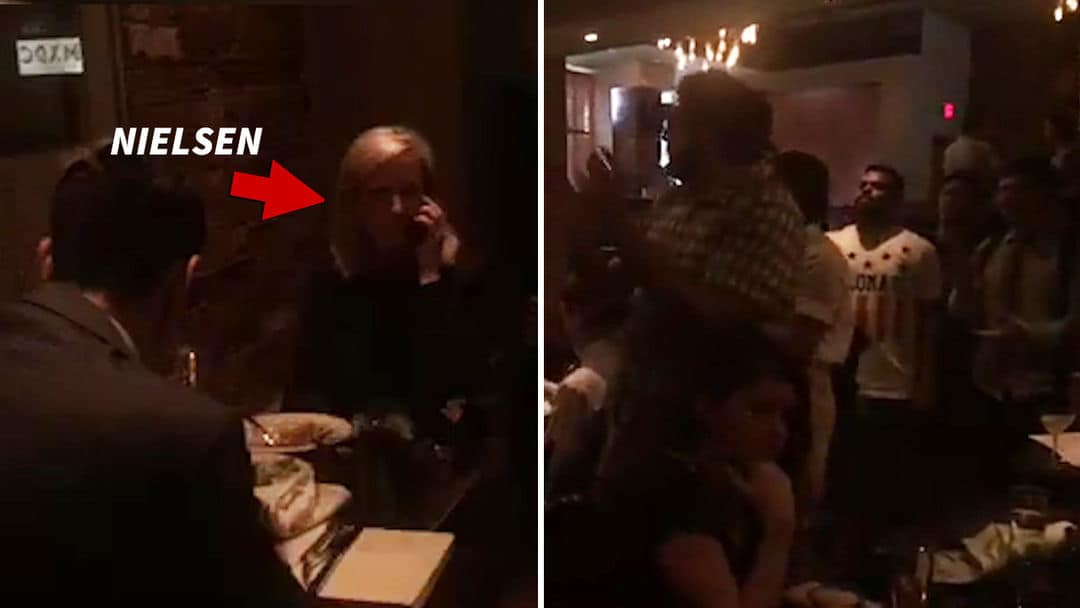 One of the biggest challenges that Trump has faced in his first 18 months as President is the rampant socialist bias that pervades our federal government. It’s hard to drain the swamp fully when it’s not just the alligators that need to go, but also the mosquitoes.

Tuesday Night DHS Secretary Kirstjen Nielsen was, for all intents and purposes, run out of a Mexican Restaurant by boisterous protesters from Democrat Socialists of America.

But those activists were not all civilians. One of them is currently employed as a paralegal with Trump’s Department of Justice.

One of the activists who chased Homeland Security Kirstjen Nielsen out of a Mexican restaurant Tuesday night over the Trump administration’s immigration policies is an employee of the Department of Justice, The Daily Caller News Foundation has confirmed.

Members of the Washington, D.C., chapter of the Democratic Socialists of America crashed Nielsen’s meal with a demonstration full of chants and other outbursts.

One of those participants, Allison Hrabar, actually works for the Trump administration — as a paralegal in the DOJ.

The Washington Examiner spoke with Hrabar Wednesday and she defended her behavior as off government time and a use of her First Amendment rights.

“If you see these people in public, you should remind them that they shouldn’t have peace,” she told The Examiner. “We aren’t the only ones who can do this. Anyone who sees Kirstjen Nielsen at dinner, anyone who sees anyone who works at DHS and ICE at dinner can confront them like this, and that’s what we hope this will inspire people to do.”

Attacking people as they try to enjoy a relaxing meal is the answer to forcing change in this country?

Though none would argue Hrabar’s first amendment rights, there is a certain amount of responsibility and respect that adults are expected to show their employers. Nielsen is an extension of President Trump and his policies. Hrabar may not think so, but she works for President Trump. Biting the hand that feeds us in a public display is not acceptable for you or I and should not be for this young woman. You or I would be fired.

Our government is overrun by socialists and the swamp can’t be fully drained in 18 months. Many have questioned some of Trump’s hires/nominees and wonder if he really cares about changing the landscape. Time will tell. But either way, it will not be easy if that is his true intent.

For now I’d say that a young woman who dares criticize her employers’ policies in the national spotlight might want to think about picking up an application on her next visit to that Mexican Restaurant.

Dean Garrison is the publisher of D.C. Clothesline. Permission is granted to reprint this article, in part or full, providing that internal links remain intact and author credit is given.