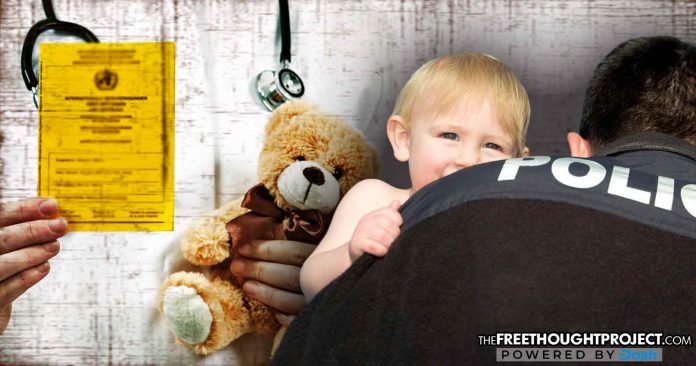 St. Paul, MN — What began as a routine trip to the doctor for her child’s cough culminated in Amanda Weber having her ten-month-old son Zayvion being taken out of her home and put into foster care. This pattern of government kidnapping children has become such an issue in Minnesota that hundreds of parents have formed a group to fight it.

Weber’s ordeal began after she took her child to the hospital for a cough.

While the doctor diagnosed the infant with a cough, and deemed him to be in stable condition, he recommended that Zayvion stay. Instead, Weber decided to take her child home after inquiring if there was anything else that needed to be done or tests run.

“After waiting, I had asked to leave because I wanted to put my kids to bed and I had my three-year-old with me and I asked if there was anything else that had to be done,” said Weber. “They said ‘No, there was no other testing or anything that needed to be done.’”

In only a matter of days police were knocking on her door and took the child to the doctor – where Weber says there were already foster parents waiting in the room.

The Star Tribune reported that after Dwight Mitchell went public with a civil rights lawsuit in April, it opened the floodgates of complaints of abuse of authority against child protection agencies. Additionally, since the lawsuit was filed, membership in the Stop Child Protective Services From Legally Kidnappingorganization has grown to more than 1,200 members statewide.

The growing organization represents a coalition of civil rights groups, black parents and attorneys, and seeks a court order declaring that specific state laws governing circumstances under which a child can be removed from the home deprive families of due process and are unconstitutional.

“Our phones have not stopped ringing and our email inboxes are overflowing,” said Mitchell. “Our association had 250 members we have now grown to 1,265 in less than 30 days.”

Mitchell, who had his own child taken away from him for 22 months before ultimately being reunited, now counts Weber among his burgeoning parent’s rights group of over 1,000 members and says he believes it ultimately comes down to financial incentives.

“[CPS] can’t even start collecting the money until the child is taken out of the home, put into foster care, then they can start billing a minimum of one social worker a month and one supervisor a month per child,” he said.

“Families are being abused, and in some cases, destroyed, as a result of laws that are inappropriate,” said Mitchell, the lead plaintiff in the case and founder of the parents’ association. “This is legal kidnapping.”

When the nanny state, under the guise of “keeping children safe,” separates children and parents, who are not even accused of or suspected of breaking the law, it’s clear that the system is broken. While there are certainly many instances where CPS has saved the lives of endangered children, there has to be modicum of common sense based on the circumstances in questions.

Often the excuse of medical neglect is invoked (i.e. making an informed parental decision that doesn’t coincide with the doctor’s advice) and operates as a de facto excuse for the state to exercise dominion over the decision-making of the parent.

Subsequently, when a profit motive is added to the equation it creates a dynamic where the default position of the state becomes: take the children first and ask questions later — a clear violation of a parent’s due process.

Weber says that while her first mission is to get her son back, she intends to help fight for the rights of others parents in similar situations.