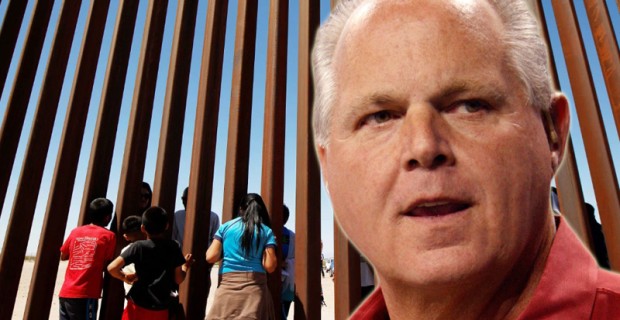 “The news media’s fanning the flames”

Rush Limbaugh warned on his radio show Wednesday that if the media continued to generate hysteria over the Trump administration’s border policy, “somebody’s gonna get killed.”

“Okay. Folks, I’m just gonna say it here. If the media keeps this up — if they keep up generating this hysteria — somebody’s gonna get killed. I think we’re pretty close to somebody getting killed already, and I’m not being hyperbolic, and I’m not trying to call attention to myself,” said Limbaugh.

Limbaugh went on to explain how the left was becoming desperate because they thought Donald Trump would have been kicked out of office by now, but his popularity only seems to be growing.

“The Drive-By Media is especially unhinged. This is the longest it’s taken to get rid of a political opponent that they can ever recall,” said Limbaugh, adding that Trump’s success, “has created a mob of political monsters who gather on Twitter to spew insane hatred — and this is bleeding over to people even in the establishment.”

Limbaugh pointed to the unhinged meltdown by leftist actor Peter Fonda, who tweeted his desire to see 12-year-old Barron Trump kidnapped and put in a cage with pedophiles, while also threatening to target and stalk the children of Border Patrol agents.

He told an intern: "If you are going to separate kids at the border, I'm going to kill his kids."

The media's hysteria is inciting violence. This has to stop.https://t.co/VsnX8lTMmd

Limbaugh also cited a story about the arrest of a Florida man who threatened to kill Republican Congressman Brian Mast’s children over the Trump administration’s child-separation immigration policy.

“If you are going to separate kids at the border, I’m going to kill his kids,” Laurence Key told an intern. Key is a Democratic activist who volunteers with the local Planned Parenthood.

“Now, why does this guy think what he thinks? Why is this guy dead wrong about what he thinks is going on? Answer: The media. How else is this guy “learning,” quote-unquote, what’s happening, what’s going on? There is no other source of information for this that generates this kind of lunatic, deranged hatred,” said Limbaugh.