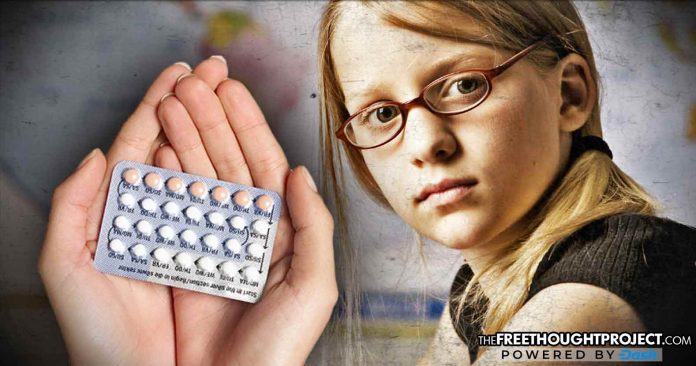 While parental consent is typically required when a student goes on a field trip or is subjected to a vision test in school, students as young 13 years old are being prescribed birth control at a public school in Washington D.C. and they could leave school with a prescription for pills or a newly inserted IUD, without their parents ever being notified.

The program is currently happening at Anacostia High School, a public school in D.C. that has around 450 students, 98.9 percent of whom are African American. Only 1 percent of the students are proficient in Math, and only 4 percent are proficient in English, according to the school’s website.

Midwife Loral Patchen, who runs the program at the school and is responsible for administering pregnancy and STD tests, and prescribing various forms of birth control to underage girls, told NPR that the goal is to reduce the rate of teen pregnancy.

“I feel really good about the fact that we offer the full range of options and we have very very low removal rates,” Patchen said, noting that the girls typically stick with the form of birth control she prescribes for the remainder of their time in high school.

Patchen also provides prenatal care for young girls who are already pregnant. While the information she is giving may be valuable, the fact that parental consent is not required raises some serious red flags.

A high school freshman, who is going already going through puberty, could be prescribed birth control pills by Patchen, which will introduce synthetic hormones into her system. Birth control pills have been shown to come packed with a variety of side effects, including an increased risk of depression.

According to a study published by the Journal of the American Medical Association, an increased risk for “first diagnosis of depression was found among users of different types of hormonal contraception, with the highest rates among adolescents.”

Another study revealed that for women who used birth control “the risk of attempting suicide was nearly double that of women who had never used contraceptives. The risk was triple for suicide. The patch was linked to the highest risk of suicide attempts, followed by IUD, the vaginal ring and then pills.”

The idea that a young girl could be experiencing severe mood changes, and depression that could lead to suicide, all while her parents had no idea that she was taking pills that were directly affecting her hormones, should concern every parent, whether or not they would approve of their children taking the substances.

While intrauterine devices (IUDs) have often been presented as a safer option, a report from the New York Legal Examiner noted that both the Paragard Copper and the Mirena IUD “have been linked with an increased risk of a serious brain injury called ‘pseudotumor cerbri,’” in which too much cerebrospinal fluid collects around the brain and symptoms resemble a brain tumor.

The report also noted that IUDs have been linked to “uterine perforation, migration, bleeding, and pain,” and the United States Food and Drug Administration has received “more than 70,000 adverse event reports concerning the Mirena, and hundreds of women have filed lawsuits seeking compensation for injuries suffered.”

“The percentage of female students who made a suicide plan increased significantly from 2007 (13.4 percent) through 2017 (17.1 percent),” the report said.

While access to birth control may be encouraged by some parents, and they have the freedom to decide to allow their children to use hormonal birth control if they choose, the key point is that parental consent gives parents the opportunity to act before it is too late if the birth control comes with adverse symptoms or side effects. The fact that more young girls are showing signs of depression and contemplating suicide serves as a reminder that parents need to be more involved in their children’s lives, not less.