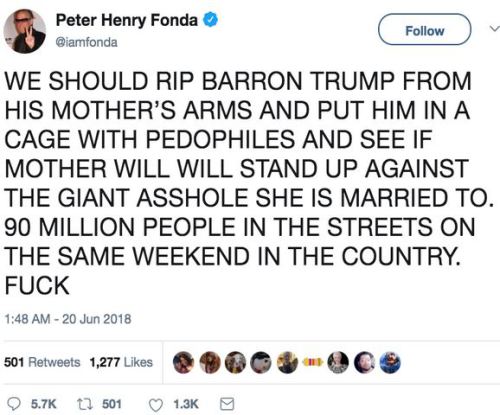 In the latest manufactured crisis by the Left, we are inundated by the media with denunciations of President Trump’s evil “policy of separation of families”.

The Catholic Church’s clergy also jumped into the fray, ignoring the Left’s sacrosanct “separation of church and state” dictum.

As an example, the morbidly obese Bishop Patrick McGrath of San Jose, CA, calls the separation of detained minor children from their illegal-alien parents “un-American, un-Christian and inhumane,” “mean-spirited and betrays our nation’s tradition of welcome to migrants and refugees.”

What the media lackeys and politicized clergy won’t tell you is this:

What the Trump administration is doing is actually enforcing U.S. immigration laws, passed by Congress, which the Obama administration had refused to enforce. By law, people caught illegally crossing our borders must be incarcerated. Some of those illegal border crossers are adults with children. When the adults are incarcerated, our government must house, feed, clothe and take care of their children — at a cost to taxpayers of more than $1 billion a year. The alternative is to jail the children with the adults.

In reality, the vast majority of illegal-entry children in detention came across the border by themselves.

As Attorney General Jeff Sessions explains in an op-ed in USA Today on June 19, 2018:

Some years ago, it was decided that law enforcement might arrest adults who crossed the border illegally by themselves, but anyone who brought a child with them would not be prosecuted, a form of immunity.

Word got out about this loophole with predictable results. The number of aliens illegally crossing with children between our ports of entry went from 14,000 to 75,000 — a fivefold increase — in just the past four years.

These trends undermine the integrity of our system. That’s why the policy that is causing them must end, too.

Ending this blanket immunity means prosecuting adults for illegal entry whether they have children with them or not. That is what we are doing at the Department of Justice.

But we will not put the children in jail. Instead, the children must be cared for by the Department of Health and Human Services, as the law requires.

And these children are well cared for. In fact, they get bettercare than a lot of American kids do. They are provided plenty of food, education in their language, health and dental care, and transported to their destination city — all at taxpayer expense.

In total, HHS is spending more than one billion taxpayer dollars a year providing quality care.

Separations are temporary and rare. The vast majority of children in custody came to this country by themselves.

… If people have a genuine asylum claim, they can come to a port of entry, make their claim legally, and remain with their children while their case is processed.

We do not want to separate parents from their children.What we want is a safe, lawful system of immigration that would end this question altogether. We want to build a wall to prevent illegal entry. Congress could make that happen quickly — and they should.

The media are calling the detention centers “concentration camps”. But The Daily Caller points out that “Photos of border detention facilities from the Obama-era, taken during 2014, look nearly identical to the ones taken during the Trump era. You never see them, however.”

Whipped into a frenzy by the fake-news media and goaded on by deceptive Catholic clergy like Bishop McGrath, the Left are becoming unhinged before our very eyes.

In an all-caps tweet today, actor Henry Fonda, 72, calls President Trump a “giant asshole” and says 12-year-old Barron Trump should be be ripped from his mother Melania’s arms and put in a cage with pedophiles:

“WE SHOULD RIP BARRON TRUMP FROM HIS MOTHER’S ARMS AND PUT HIM IN A CAGE WITH PEDOPHILES AND SEE IF MOTHER WILL WILL STAND UP AGAINST THE GIANT ASSHOLE SHE IS MARRIED TO.”

The Daily Caller reports that First Lady Melania has notified the Secret Service about Peter Fonda’s threats against her son.

Fonda’s terrorist threat is only the latest in a series of Twitter threats against White House officials, particularly females and children:

Sony Pictures is releasing a movie, Boundaries, starring Fonda in a matter of days. Be sure you boycott the movie and any other movie or TV Peter Fonda is in.

For his part, actor Tom Arnold also tweeted a threat against Barron, calling for protesting the boy’s school so as to make Barron “uncomfortable”: