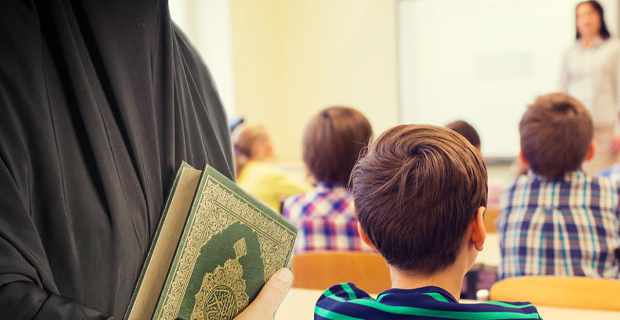 “We were on our way home when he suddenly started to sing ‘Allah, Allah’”

Catholic children at a school in Linz, Austria were forced to memorize and recite Islamic songs during Ramadan or face punishment, according to one shocked parent.

“We were on our way home when he suddenly started to sing ‘Allah, Allah’,” the mother said, adding, “It felt like a slap in my face!”

Her son subsequently told her that children were ordered to “get involved” and that if they failed to do so were told, “We’ll have to go to the director and then there’ll be a punishment.”

The entire program lasted for two months, with a dedicated Islamic religious teacher attending the school and directing the pupils, “to learn the appropriate Ramadan songs, because the whole class must celebrate this festival,” reports Voice of Europe.

The mother said that she had no issue with Muslim students taking part in the activity, but said there should have been a choice to opt out.

According to another teacher at a school in Vienna, “Many schools are getting more and more out of control” and, “the problems in the classrooms are almost impossible to solve anymore.”

She added that, “Sharia law is superior for many of my students,” warning, “Music and dance are rejected on religious grounds. Also discussions and fights take place with increasing frequency along religious lines.”

Austria’s new conservative-populist coalition government is attempting to take steps to roll back the Islamic influence on its culture, having introduced a proposal to ban headscarves for girls under the age of 10 in schools.

As we have previously highlighted, Islamic radicalization is becoming an increasing problem in schools across Europe.

A mother in Germany whose daughter was being bullied by Muslim students because she was blonde, Christian and didn’t wear a headscarf was toldby the headmaster of a school in Frankfurt to cover her up with a hijab.

Earlier this year, the president of Germany’s Teachers Association warned that schools with over 70% migrant students are spiraling out of control, with attacks on female teachers and Jewish students becoming commonplace.

Heinz-Peter Meidinger told BILD that a story in Berlin about Muslim migrant students circulating ISIS beheading videos was not a lone case and that such propaganda is “spreading like wildfire”.