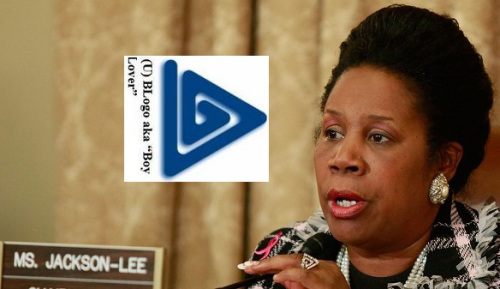 These are the symbols for “boy lover” pedophiles, according to the FBI:

“Pedophilia symbols on jewelry, coins, Web sites and other effects are indicative of advertisement methods used by child sexual predators to promote their cause.… Identical or similar jewelry and symbols as described in this intelligence bulletin should raise suspicion of possible pedophilia activity when found during searches.”

The above pic of Lee was taken at a House Homeland Security Committee hearing on Capitol Hill, December 16, 2009 (source: The Blaze and Getty Images)

Elected to the U.S. House of Representatives in 1995, Sheila Jackson Lee’s net worth was below the House median until 2007 when it began to increase and surpassed the House median net worth by 2009, the year when she was photographed wearing the “boy lover” pedophile ring.

In 2013 her net worth dramatically shot up, to $3.5 million by 2015. In contrast, the median net worth of all members of the House of Representatives has remained stable, at around $800,000.