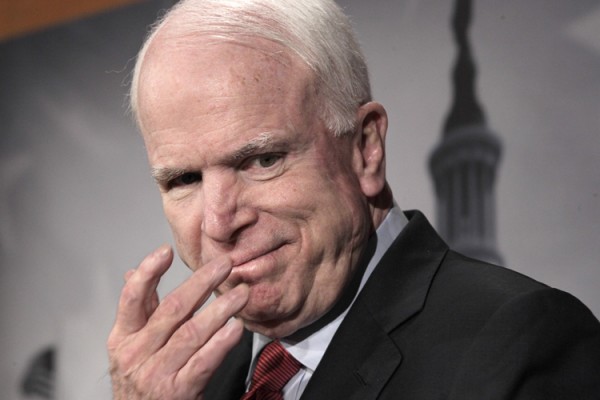 Remember how the IRS under the Obama administration maliciously targeted conservatives, for which IRS officials like Lois Lerner were never held accountable?

Cover photo of The Atlantic, October 2008.

The explosive exchange was contained in notes taken by IRS employees at an April 30, 2013, meeting between Kerner, Lerner, and other high-ranking IRS officials. Just ten days following the meeting, former IRS director of exempt organizations Lois Lerner admitted that the IRS had a policy of improperly and deliberately delaying applications for tax-exempt status from conservative non-profit groups.

Lerner and other IRS officials met with select top staffers from the Senate Governmental Affairs Committee in a “marathon” meeting to discuss concerns raised by both Sen. Carl Levin (D-MI) and Sen. John McCain (R-AZ) that the IRS was not reining in political advocacy groups in response to the Supreme Court’s Citizens United decision.  Senator McCain had been the chief sponsor of the McCain-Feingold Act and called the Citizens United decision, which overturned portions of the Act, one of the “worst decisions I have ever seen.”

[Note: Citizens United v. Federal Election Commission, 558 U.S. 310 (2010), is a landmark U.S. constitutional law, campaign finance, and corporate law case dealing with regulation of political campaign spending by organizations. On January 21, 2010, the Supreme Court ruled (5–4) that the free speech clause of the First Amendment to the Constitution prohibits the government from restricting independent expenditures for communications by nonprofit groups,  for-profit corporations, labor unions, and other associations.]

In the full notes of an April 30 meeting, McCain’s high-ranking staffer Kerner recommends harassing non-profit groups until they are unable to continue operating. Kerner tells Lerner, Steve Miller, then chief of staff to IRS commissioner, Nikole Flax, and other IRS officials, “Maybe the solution is to audit so many that it is financially ruinous.” In response, Lerner responded that “it is her job to oversee it all:”

Judicial Watch previously reported on the 2013 meeting.  Senator McCain then issued a statement decrying “false reports claiming that his office was somehow involved in IRS targeting of conservative groups.”  The IRS previously blacked out the notes of the meeting but Judicial Watch found the notes among subsequent documents released by the agency.

Judicial Watch separately uncovered that Lerner was under significant pressure from both Democrats in Congress and the Obama DOJ and FBI to prosecute and jail the groups the IRS was already improperly targeting. In discussing pressurefrom Senator Sheldon Whitehouse (Democrat-Rhode Island) to prosecute these “political groups,” Lerner admitted, “it is ALL about 501(c)(4) orgs and political activity.”

The April 30, 2013 meeting came just under two weeks prior to Lerner’s admission during an ABA meeting that the IRS had “inappropriately” targeted conservative groups. In her May 2013 answer to a planted question, in which she admitted to the “absolutely incorrect, insensitive, and inappropriate” targeting of Tea Party and conservative groups, Lerner suggested the IRS targeting occurred due to an “uptick” in 501 (c)(4) applications to the IRS but in actuality, there had been a decrease in such applications in 2010.

On May 14, 2013, a report by Treasury Inspector General for Tax Administration revealed: “Early in Calendar Year 2010, the IRS began using inappropriate criteria to identify organizations applying for tax-exempt status” (e.g., lists of past and future donors). The illegal IRS reviews continued “for more than 18 months” and “delayed processing of targeted groups’ applications” in advance of the 2012 presidential election.

All these documents were forced out of the IRS as a result of an October 2013 Judicial Watch Freedom of Information (FOIA) lawsuitfiled against the IRS after it failed to respond adequately to four FOIA requests sent in May 2013 (Judicial Watch, Inc. v. Internal Revenue Service (No. 1:13-cv-01559)). Judicial Watch is seeking:

“The Obama IRS scandal is bipartisan – McCain and Democrats who wanted to regulate political speech lost at the Supreme Court, so they sought to use the IRS to harass innocent Americans,” said Judicial Watch President Tom Fitton. “The Obama IRS scandal is not over – as Judicial Watch continues to uncover smoking gun documents that raise questions about how the Obama administration weaponized the IRS, the FEC, FBI, and DOJ to target the First Amendment rights of Americans.”