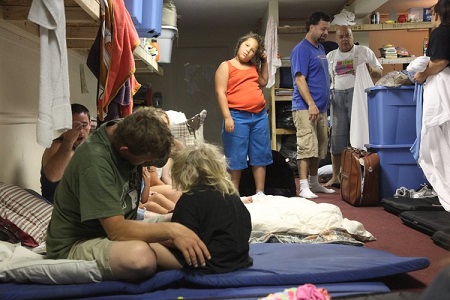 However, when compared to the conditions that the American homeless children and adults live in, the centers for children separated from their parents look much better.

Though many in the establishment media will not cover this, many American children are homeless and kept in worse conditions than migrant children.

Which is more heartbreaking and deserving of attention by the American public?

The government spends taxpayer money on housing and detention facilities for illegal alien invaders and their children.  Yet, homeless American adults and their children are reliant on the charity of others when it comes to seeking shelter.  Shelters cannot accommodate every homeless American adult and child so many live in tents, cars, and wherever relief from the elements can be found.

Of course, the out of control anti-constitutional groups rage against facilities provided by the government, at taxpayer expense, because the conditions are “inhumane.”  Again, what is humane about our homeless living in tents, cars and makeshift shelters?  One thing these anti-constitutional groups will not highlight is a Texas based non-profit that received approximately $1 billion dollars of taxpayer money to house illegal alien invader children.

As debate continues over the Trump administration’s “zero-tolerance” immigration policy, questions are being asked about a non-profit group that has collected huge amounts of government money to house and care for thousands of immigrant children being held in the system.

Texas-based Southwest Key Programs has taken in roughly $1 billion in federal contracts since the Obama administration, and is expected to receive about $500 million this year to house and provide services for immigrant children, according to reports.

According to the report, Juan Sanchez served on the board of the National Council of La Raza (NCLR) from 2007 to 2013.  La Raza happens to be the oldest and largest of this republic’s Latino advocacy groups.  Recently, La Raza changed its name to UnidosUS.

Despite the huge government contracts, Sanchez and Southwest Key Programs stayed on the margins of public awareness – and controversy – until recently. Now the group faces more scrutiny for, among other things, operating the largest licensed shelter for immigrant children in the United States.

A 250,000-square-foot facility at a former WalMart superstore in Brownsville, Texas, today houses some 1,500 boys between the ages of 10 and 17 who illegally entered the U.S. Southwest Key bought the facility in 2016, but its former owners aren’t happy with how it’s turned out.

“We’re really disturbed by how our former store is being used,” Walmart said in a tweet on Wednesday. “When we sold the building in 2016 we had no idea it’d be used for this.”

Southwest Key holds a total of more than 5,000 immigrant children, about 10 percent of whom are said to have been separated from their families since May, when the new policy was announced. Its shelters for immigrants minors are in Texas, Arizona and California.

The reason anti-constitutionalists have not mentioned this illegal alien invader children “housing” program is the dissatisfaction of Latinos, lawmakers, and “immigrant rights activists” and Southwest Key’s own board of directors with this “charity.”   How can this program be determined a “charity” when it receives taxpayer money from the federal government?

According to Fox News, “Many Latinos, lawmakers, and immigrant rights activists fuming over the idea that a charity whose image was one of standing up for Latino and underprivileged children is actively involved in the housing of minors.  Even Southwest Key’s own board of directors are divided over its role.”  This organization has operated for years;  but, only now are anti-constitutionalists fuming over its role in housing illegal alien invader children.  Can you say “situational, media-driven out of control ragers?”  As long as Hussein Soetoro occupied the White House, these “fuming useful idiots” cared less what this organization did, what was done with the property sold to it, or where the money came from to operate it.

But, how many years did this “charity” operate on taxpayer funds without any opposition by anti-constitutionalists who support illegal alien invader criminals?  And, are the conditions as bad as America’s homeless adults and children?

The federal government doled out a total of $1 billion dollars since the Hussein Soetoro administration to house children of criminal illegal alien invaders, instead of deporting the criminal parents and their children immediately.  This “charity” received taxpayer funds to house illegal alien invader children separated from their criminal parents as homeless American adult and children are to get by the best way they can.  How loud was the out of control rage of anti-constitutionalists against this “charity” that operated with taxpayer money during the Hussein Soetoro administration?  Well, all constitutionalists heard were crickets.

What is the point of this and what are readers to gain from this information?  Simple.  It is well-organized, media-driven propaganda to stir anti-constitutionalists to the point of out of control rage in order to smear the Trump administration for a policy continued through several previous presidents, including Hussein Soetoro.  Moreover, it is a contrived event by Democrats, who had no problem with the policy under Soetoro, to beat Republicans, constitutionalists and Trump over the head in order to affect a change via executive order, instead of legislation, that can be used against Republicans and constitutionalists in the future.  It’s how the game is played by Democrats and their leading of the controlled opposition, aka Republicans.  The Republican opposition can hardly criticize the use of executive orders by a Democratic president to “legislate” when the party supported their man doing it.

If either party cared about the plight of children, wouldn’t both parties address the plight of homeless American adults and children – not through unconstitutional means, but constitutional ones, such as strict enforcement of immigration law, lessening of bureaucratic red tape of unconstitutional agencies directed at private businesses, and supporting of the free market capitalist system instead of corporate conglomerate monopolies?  Of course, they would.

For the cold, hard ugly truth of the matter is neither party cares about the plight of children, citizens or illegal alien invaders.  These children are nothing more than political fodder.  The humane thing to do is to send these illegal alien invader criminal parents and their children, along with unaccompanied children, back to the country of their citizenship or origination.  Corrupt, anti-constitutional politicians of both parties know this.  However, their main focus is getting votes to stay in power and control the people.  They’ll swing whichever way the wind blows to do it.  And, they will use any means necessary, including lawlessness.  Moreover, they will use the government controlled lamestream enemedia to lie, deceive, and create controversy in order to portray a minority of citizens supporting lawlessness as the majority.  Constitutionalists and the Constitution, be damned.