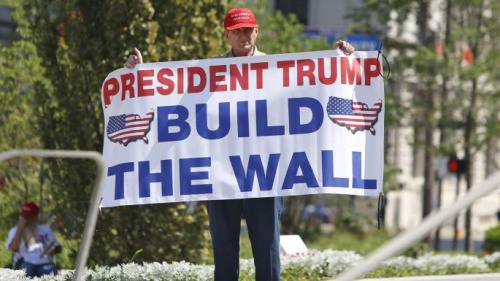 El Universal is a Mexican daily newspaper founded in 1916, with a print circulation of 300,000 and an online readership of more than 16 million unique visitors each month.

Misael Zavala reports for El Universal that at a campaign rally on June 19, 2018, Mexican presidential candidate Andrés Manuel López Obrador, of the AMLO or Together We Will Make History coalition, protested the Trump administration “locking migrant children in cages” and declared that if he wins the July 1 election, he will be an advocate for the “human right” of “migrants” from the Americas and the world to flood the United States:

In the rally, Obrador also demanded that Mexico’s President Enrique Peña Nieto must take these actions to stop “the arrogant, racist and inhumane attitude of the government of Donald Trump”:

Paul Bois reports for The Daily Wire, June 22, 2018, that Obrador is currently the frontrunner. He has run on a ticket opposing President Trump’s policies toward Mexico. From the New York Times:

After 18 years of trying, and trying again, Mr. López Obrador, widely known as AMLO, may have a historic opportunity. He has said that his presidency will signal the start of Mexico’s fourth revolution, following independence from Spain in the early 19th century, the liberal reforms later that century, and the Mexican Revolution in the early 20th century.

He promises an austere, nationalist government that will fight corruption and inequality. He has said he will push constitutional amendments to change Mexico’s energy policy, eliminate immunity for government employees and allow for mechanisms of direct democracy, such as presidential referendums. He has repeatedly compared himself to Mexican leaders like Benito Juárez, Francisco Madero and Lázaro Cárdenas, which is like an American candidate comparing himself to George Washington, Abraham Lincoln and Franklin D. Roosevelt.

Instead of threatening the United States with an invasion of illegal “migrants” across the border, Obrador should attend to the very real problems of his own country, where violent crimes are out of control and politicians are being assassinated by droves.

According to the UPI, since Mexico’s election began last September, 113 political candidates and 8 journalists have been killed. The most recent victim is Rosely Danilu Magaña, a municipal councilor candidate for Isla Mujeres, an island just off the coast of Cancun, who was shot to death on June 11, 2018, with a bullet to her thorax.

The killings of politicians are part of the general criminality of Mexico. Violence in Mexico, mainly organized crime, has intensified in recent years. Mexico has the distinction of having 4 of the world’s 26 most dangerous cities in 2017: Acapulco (#2), Victoria (#5), Tijuana (#22), Culiacán (#24). 2017 was the most violent year in recent decades, with more than 25,000 homicides.