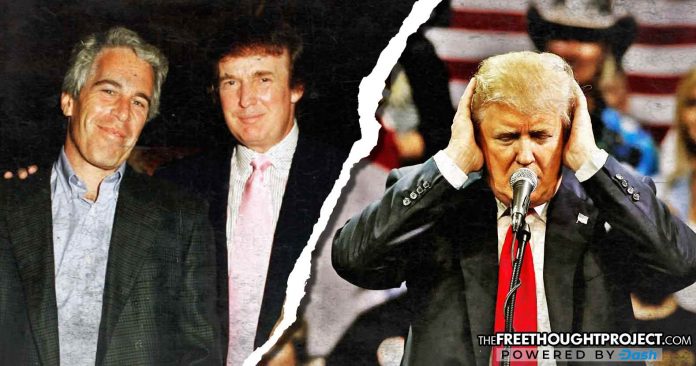 As the old adage goes, where there is smoke, there is fire. This week, a man attending a rally for President Trump in Minnesota held up a sign with a photo of Trump, and one of his close friends from the past, convicted pedophile Jeffrey Epstein—and Trump’s reaction is incredibly notable.

Well well well. At Trump’s Minnesota rally a protester held up a pic of Epstein and Trump with the words “who is Jeffrey Epstein?”

When it was taken away he quickly brought out another one. pic.twitter.com/UOUFAvneut

Trump’s friendship with Epstein goes back years, and Trump has a history of speaking with admiration of the billionaire pedophile in interviews.

“I’ve known Jeff for 15 years. Terrific guy,” Trump said. “He’s a lot of fun to be with. It is even said that he likes beautiful women as much as I do, and many of them are on the younger side. No doubt about it—Jeffrey enjoys his social life.”

Epstein, who once was a member at Mar-a-Lago, Trump’s golf resort in Miami, was convicted of soliciting sex with a 14-year-old girl and received a sweetheart deal from prosecutors. Not only did the billionaire get just 13 months in prison, but he was allowed out of jail on work-release.

There were at least more than three dozen other victims who accuse Epstein of raping and sex-trafficking them, and they were never able to have their day in court because of the deal. They are now suing the federal government in court for failing to follow the law by notifying the victims of the plea deal given to the billionaire sexual predator. The federal Crime Victim’s Rights Act requires victims to be notified of any plea deals before they are offered.

The prosecutor who approved the sweetheart deal for Epstein, former U.S. Attorney Alexander Acosta, was later hired by the Trump Administration to serve as Trump’s Secretary of Labor. In a comment on the lenient treatment he gave Epstein, Acosta said, “Our judgment, in this case, based on the evidence known at the time, was that it was better to have a billionaire serve time in jail, register as a sex offender and pay his victims restitution than risk a trial with a reduced likelihood of success.”

To put it into perspective, Epstein was facing the rest of his life behind bars if the other more than three dozen victims—who were mostly underage—were allowed to receive justice for being pimped out by a billionaire pedophile. Instead of justice, he got a slap on the wrist, was allowed to keep turning his money over so it would not get moldy, and the prosecutor in the case was promoted to a cabinet position within the Trump Administration. Now, do you see why a protester holding a photo with Epstein’s face on it would get kicked out of the rally by Trump?

When billionaires are offered special deals while poor people spend the rest of their lives behind bars for such crimes, it should raise major red flags. The prosecutor, instead of being fired for cutting a deal letting off a pedophile whose assets could have been sold and given to the victims, got a promotion within the federal government. TFTP’s Matt Agorist detailed the nature of Epstein’s plea deal:

It should have been a textbook case that would have made the FBI look heroic for putting a serial pedophile behind bars. However, the opposite happened. Epstein agreed to a plea deal for one minor charge in 2008, and he ended up spending just 13 months in prison, out of the 18-month sentence he was given for “soliciting prostitution and procuring a minor for prostitution.”

In addition to the ridiculously light sentence, the Palm Beach Post reported that in exchange for the year Epstein spent in prison, “federal prosecutors agreed not to pursue allegations that he had abused dozens of other teenage girls, instead of allowing them to file civil lawsuits against Epstein.”