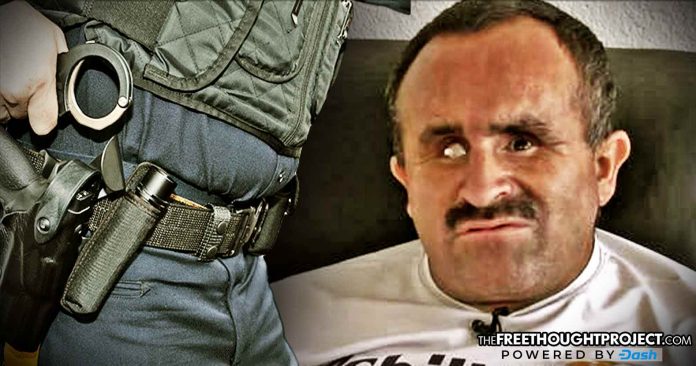 Phoenix, AZ – A blind man was arrested and charged with assaulting a police officer after the man says he accidentally bumped into the officer in a public restroom while trying to locate a urinal, and the officer responded by yelling and shoving him.

Marco Zepeda said he was just trying to navigate his way around a public restroom when he ran into an officer and then attempted to defend himself after the officer shoved him. Zepeda told ABC 15 that it all started as he was snapping his fingers and running his hand along the wall to find an open urinal.

“I didn’t hear anybody coming out…(then)…I heard somebody screaming to me and turn around really quick and push me…I go, ok, no, no—this is not going to happen to me,” Zepeda said.

The man, who travels by city bus, told reporters that he gets cursed at and assaulted often on the streets of Phoenix and decided to defend himself. But after he felt the officer’s radio, he quickly realized the man was likely a police officer. That unnamed peace officer quickly took Zepeda to the ground with such force his eyepiece fell on the floor. The blind man began screaming at the officer telling him he was blind and asking for mercy and understanding.

“I said a couple times to him, ‘I’m blind, please, leave me alone—I didn’t know you were a [police officer],” Zepeda said, noting that after his eyepiece fell out, he addressed the officer again.

“He saw that thing on the floor,” Zepeda said. “I turn around to him and I go, look at my eyes, I’m blind, I didn’t know you were a [police officer] and, even that, he didn’t care.”

In lieu of grace and compassion, the blind man got charged with assault on a police officer. We searched Maricopa County’s arrest records online and could not find a record of any charges being filed against Zepeda, even though he spent the rest of the night in jail.

ABC 15 reported that they confirmed with Phoenix PD that Zepeda was indeed arrested and now Zepeda has hired an attorney and plans to fight the charges in court. Phoenix Police also confirmed the officer sustained minor injuries to his face but those minor abrasions would never have taken place, arguably, had the officer not shoved the man in the first place.

The problem is so bad that the county is now paying researchers to investigate exactly how and why Phoenix’ seemingly trigger-happy cops are shooting citizens. For now, they apparently feel justified locking up blind people for nonexistent threats.