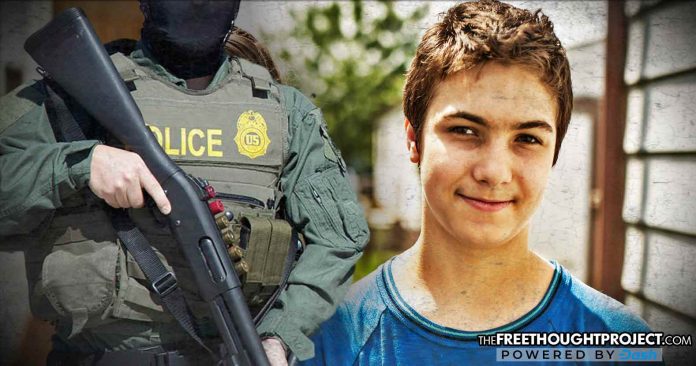 Manteno, IL – A trip to the principal’s office at Manteno Middle School resulted in controversial felony eavesdropping charges for 13-year-old Paul Boron, in what is the latest saga of controversy regarding an Illinois eavesdropping law, which critics have warned is ripe for abuse and could be misapplied by authorities.

On the day in question, Boron was called to the office for not showing up for a number of detentions. Prior to meeting with Principal David Conrad and Assistant Principal Nathan Short, Boron turned on an audio recording application on his cell phone to record the exchange.

A report by Illinois Policy explained the chronology of events:

Boron said he argued with Conrad and Short for approximately 10 minutes in the reception area of the school secretary’s office, with the door open to the hallway. When Boron told Conrad and Short he was recording, Conrad allegedly told Boron he was committing a felony and promptly ended the conversation.

The incident, which took place in February, resulted in the 13-year-old being charged two months later, in April, with one count of class 4 felony eavesdropping.

“If I do go to court and get wrongfully convicted, my whole life is ruined,” Boron, who lives with his mother and four siblings in Manteno, Illinois, an hour southwest of Chicago, told Illinois Policy. “I think they’re going too far.”

According to court records, Kankakee County Assistant State’s Attorney Mark Laws alleges that on Feb. 16, Boron “used a cell phone to surreptitiously record a private conversation between the minor and school officials without the consent of all parties.”

The boy’s mother, Leah McNally, noted her disappointment that the school chose to prosecute Boron, who is legally blind in his right eye, rather than help him overcome his disability and achieve his “full potential in life.”

“It blew my mind that they would take it that far,” she said. “I want to see him be able to be happy and live up to his full potential in life, especially with the disability he has.”

School officials have thus far refused to comment on the incident.

“We cannot comment on a pending matter, and we are not authorized to release confidential student information to the press,” district Superintendent Lisa Harrod wrote in an email to Illinois Policy.

Illinois is an “all-party consent” state, where recording nearly any conversation, unless all parties consent, is a felony offense. The majority of states, however, as well as the Federal government, allow for one-party consent.

The current Illinois eavesdropping law, which is one of the most controversial and severe eavesdropping laws in the United States, was passed and signed into law during lame-duck session in December 2014, after the previous eavesdropping law was struck down in March 2014, by the Illinois Supreme Court, which held that the law “criminalized a wide range of innocent conduct” and violated individuals’ First Amendment rights.

Illinois Policy highlighted a number of the cases in which individuals had their constitutionally protected behavior criminalized under the old eavesdropping law:

The main facet of the criminalized conduct referenced was the recently established “right to record” a police officer during their carrying out of their official police duties.

While the changes made to the Illinois law ostensibly intended to allow residents to record interaction with police, it maintained the “all-party consent” provisions and implemented an ambiguous standard for consent to record.

The current law made it a felony to record any “private conversation,” defined as “oral communication between [two] or more persons” where at least one person has a “reasonable expectation” of privacy, without the knowledge of all parties being recorded.

Highlighting the extremely ambiguous nature of the law, one sponsor of the new law, former state Rep. Elaine Nekritz, when asked how a person could tell when there is a reasonable expectation of privacy when recording police officers, infamously responded, “We’ll know it when we see it.”

“In a public school setting, what kind of reasonable expectation of privacy can there be for a principal interacting with the public?” asked Wayne Giampietro, former president of the Illinois-based First Amendment Lawyers Association.

Attorney Saleem Mamdani, who prepared a presentation regarding Illinois’ eavesdropping law for an Illinois State Bar Association seminar, expressed surprise at the misapplication of the law, and how there could be any expectation of privacy given the nature of the principal/student relationship.

“With authority figures, if you are engaging in official action, how are you expecting that to be private?”he said. “You are relying on the fact that you had this conversation in imposing current or future discipline.”

With the recent mass sexual misconduct uncovered within the Chicago school system, including administrators and staff, perhaps lawmakers should be more willing to allow students to record interactions with the adults who run their schools in the name of transparent conduct.