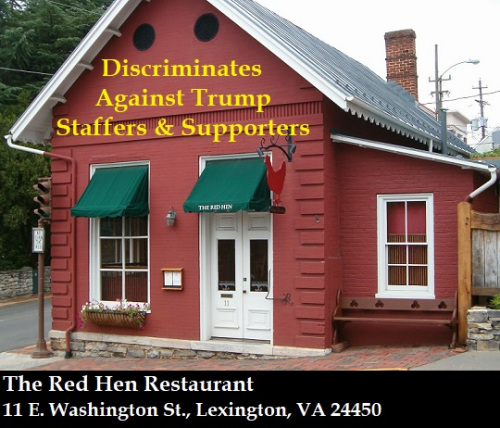 This is a guest post by FOTM reader Grif!

An Associated Press report, first picked up by the Christian Broadcasting Network, and subsequently by other media, said Sanders was ordered out of The Red Hen Restaurant in Lexington, Virginia, by the owner Stephanie Wilkinson, even as the chef was cooking Sanders’ dinner. Sanders said the event said far more about the owner of the restaurant than it did about her.

In a tweet from her official account, Sanders said, “I always do my best to treat people, including those I disagree with, respectfully and will continue to do so.”  The tweet generated more than 22,000 replies in about an hour. The ensuing furor pitted both supporters and detractors of Sanders. Her father, former Arkansas governor Mike Huckabee, even joined the conversation. “Bigotry.” He tweeted. “On the menu at Red Hen Restaurant in Lexington VA. Or you can ask for the ‘Hate Plate.’ And appetizers are ‘small plates for small minds.”’

The incident mirrors an earlier incident in the week when Secretary of Homeland Security Kirstjen Nielsen cut short a working dinner in a Mexican restaurant after protesters shouted, “Shame!” until she left.

In the ensuing social media dialogues, people from all across the country began to take sides. Some wanted to organize protests outside Red Hen restaurant, while others championed owner Wilkinson as a hero.

On Yelp, a Los Angeles-based restaurant reviewer chimed in, “Don’t eat here if you’re a Republican, wearing a MAGA hat, or are a patriot.”

Other Yelp commenters, however, supported the restaurant owner’s action. A responder from Commerce City, Colorado wrote, “Bonus: this place is run by management who stuck up for their beliefs and who are true Americans. THANK YOU!!!!”

Red Hen was trending toward the top of Twitter — 75,000 mentions within a couple hours of the first news stories.

In an interview with the Washington Post, Wilkinson explained her reasons for why she asked Sanders and her companions to leave.

“Several Red Hen employees were gay,” she said. “They knew Sanders had defended Trump’s desire to bar transgender people from the military. This month, they had all watched her evade questions and defend a Trump policy that caused migrant children to be separated from their parents.” Wilkinson said that the Sanders party already had been seated and their orders taken when she was informed by telephone who they were. It took her several minutes to drive from her home to the restaurant. She conferred with her employees.

“Tell me what you want me to do. I can ask her to leave,” Wilkinson told her staff. “They said yes.” Wilkerson then walked up to Sanders’ chair.

She told Sanders about her feelings vis-sà-vis the president and recent events.

“I explained that the restaurant has certain standards that I feel it has to uphold, such as honesty, and compassion, and cooperation. I’d like to ask you to leave.”

As of Saturday afternoon, media personnel from broadcast stations and newspapers were camping out on the street next to the Red Hen. Wilkinson, however, remained steadfast in her belief that she was justified in throwing out the White House press secretary because she works for President Trump. She told the Washington Post, “Whatever happens, we will soldier on. Absolutely, yes, I would have done the same thing again.”