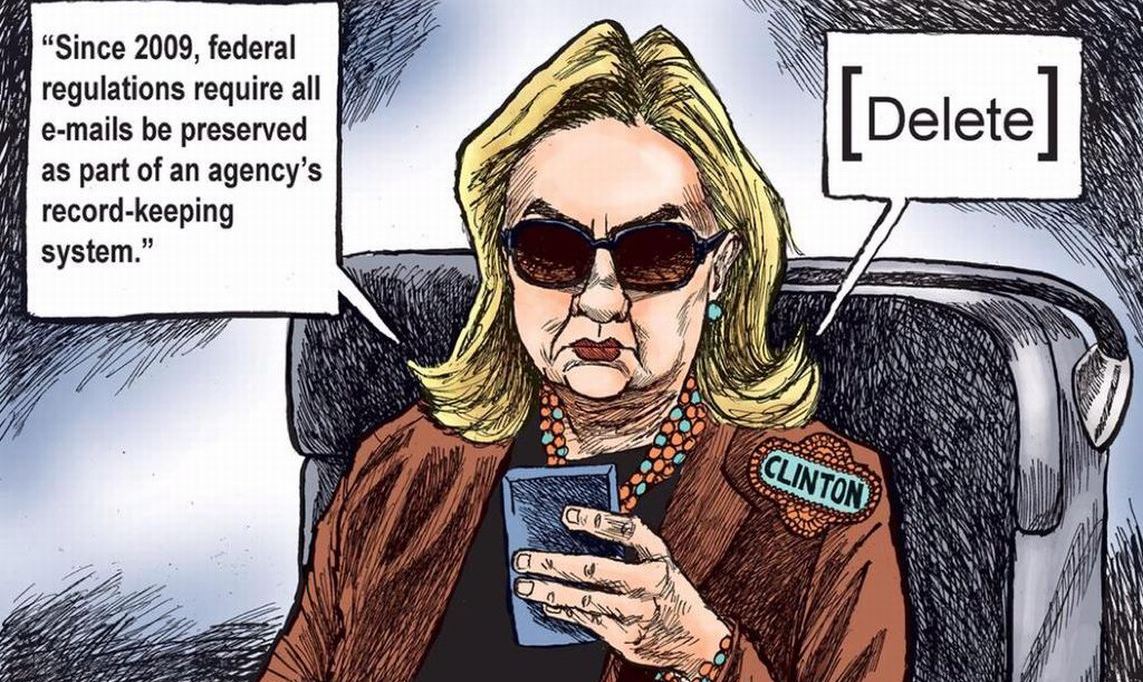 Paul Sperry (NY Post) has the explosive story. Or, rather, he had it on January 31, 2016. That’s when it was published. What happened to it?

Sperry/2016: “The State Department is lying when it says it didn’t know until it was too late that Hillary Clinton was improperly using personal emails and a private server to conduct official business — because it never set up an agency email address for her in the first place, the department’s former top watchdog says.”

“’This was all planned in advance’ to skirt rules governing federal records management, said Howard J. Krongard, who served as the agency’s [State Department] inspector general from 2005 to 2008.”

“The Harvard-educated lawyer points out that, from Day One, Clinton was never assigned and never used a state.gov email address like previous secretaries.”

“’That’s a change in the standard. It tells me that this was premeditated. And this eliminates claims by the State Department that they were unaware of her private email server until later,’ Krongard said in an exclusive interview. ‘How else was she supposed to do business without [an official State Department] email?’”

“He also points to the unusual absence of a permanent [State Department] inspector general during Clinton’s entire 2009-2013 term at the department. He said the 5½-year vacancy was unprecedented.”

“’This is a major gap. In fact, it’s without precedent,’ he said. ‘It’s the longest period any department has gone without an IG’.”

“’It’s clear she did not want to be subject to internal investigations,’ Krongard said. An email audit would have easily uncovered the secret information flowing from classified government networks to the private unprotected system she set up in her New York home.”

“He says ‘the key’ to the FBI’s investigation of Emailgate is determining how highly sensitive state secrets in the classified network, known as SIPRNet, ended up in Clinton’s personal emails.”

“’The starting point of the investigation is the material going through SIPRNet. She couldn’t function without the information coming over SIPRNet,’ Krongard said. ‘How did she get it on her home server? It can’t just jump from one system to the other. Someone had to move it, copy it. The question is who did that?’”

“As The Post first reported, the FBI is investigating whether Clinton’s deputies copied top-secret information from the department’s classified network to its unclassified network where it was sent to Hillary’s unsecured, unencrypted email account.”

I did a bit of further searching, and came across a nugget buried in a CNN article, dated 3/3/15, “Team Clinton: ‘Nothing nefarious’ at State,” by Dan Merica and Laura Koran. Here it is:

“On Tuesday, Marie Harf, a deputy State Department spokeswoman, said… ’While Secretary Clinton did not have a classified email system, she did have multiple other ways of communicating in a classified manner, including assistants printing documents for her, secure phone calls, and secure video conferences,’ Harf added.”

Did you catch the key phrase? WHILE SECRETARY CLINTON DID NOT HAVE A CLASSIFIED EMAIL SYSTEM.

What does that indicate? It appears to confirm that Clinton NEVER had a secured, protected, official State Department email address. Therefore, despite denials, she must have been conducting classified government business through her own unsecured email account.

Was this issue ever brought up during interviews the FBI conducted with Hillary? If so, what were her responses?

For example, did she say, “Back off and ease up, boys, we’re all in this together”? Did she say, “We all know I’m trying to shield the Clinton Foundation operations and money”?

She’s clean as a whistle. Nothing to see here. Don’t worry, be happy.