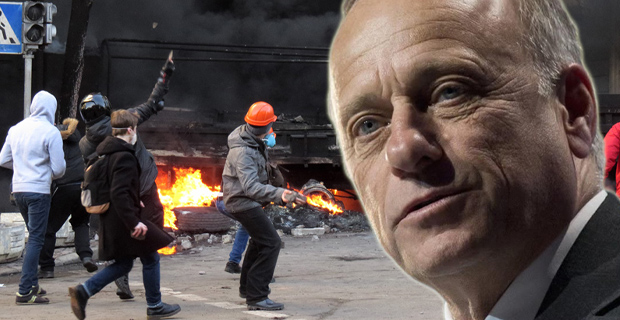 Republican Congressman Steve King warns that America is heading towards a second civil war as a result of the increasingly polarized political environment gripping the country.

“America is heading in the direction of another Harpers Ferry. After that comes Ft. Sumter,” tweeted King, with a link to an article about how “Occupy” protesters shut down an ICE office in Portland, Oregon.

Harpers Ferry is a reference to the Battle of Harpers Ferry, when Gen. Robert E. Lee’s Confederate army invaded Maryland in September 1862 and defeated Union forces. Ft. Sumter refers to the second battle at that location during the Civil War when Union forces attacked Confederate forces.

King is by no means the first prominent figure to discuss the prospect of civil war in the context of America’s intense political climate.

In an interview with Politico, historian Michael Beschloss said that the recent confrontations between activists and Trump administration officials is, “a new disheartening sign of a country that is becoming more divided by the hour.”

Concerns about civil unrest have increased in recent days following a number of incidents where people connected to Trump have been aggressively harassed.

California Democratic Rep. Maxine Waters told a rally on Saturday, “If you see anybody from that Cabinet — in a restaurant, in a department store, at a gasoline station — you get out and you create a crowd. And you push back on them. And you tell them they’re not welcome anymore, anywhere,” prompting some to accuse her of inciting violence.