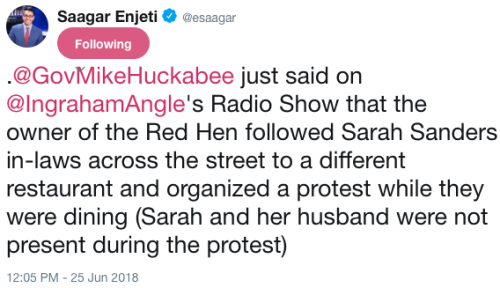 There, restaurant owner Stephanie Wilkinson told Ms. Sanders to leave, ostensibly because restaurant employees object to Sanders’ presence because of President Trump’s no transgenders in the U.S. military policy and his   determination to actually implement federal laws on illegal border-crossing.

But Wilkinson wasn’t content with kicking Sanders out of The Red Hen.

According to Governor Mike Huckabee, Wilkinson actually followed Sanders’ in-laws to another restaurant across the street, and organized a protest outside while the in-laws were dining.

Meanwhile, around two dozen threats were made in the past few days, primarily against Immigration and Customs Enforcement (ICE) officers. Leftwing psychopaths also doxxed thousands of Department of Homeland Security (DHS) employees and released their personally identifiable information on social media.

A senior DHS official found a burnt and decapitated animal on the front porch of his home in Washington, DC. (ABC News)

Where’s the outcry from PETA and the Humane Society?