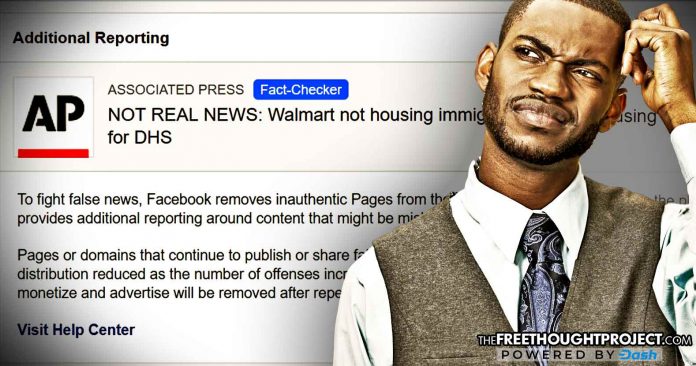 Before the 2016 election, people freely chose their sources for information, had discussions about the veracity and accuracy of those sources if they chose to question them, and then formed opinions based on those discussions. Now, however, this choice and discussion is quickly fading away and is being replaced by a seeming ministry of truth made up of ostensibly objective media outlets like Politifact, Snopes, and the Associated Press.

For years, Snopes has been debunking articles and giving them questionable ratings because of their content, but this was never a big deal because readers like ours are smart enough to question Snopes and read the facts for themselves to make up their own minds.

While our readers are still smart enough to check multiple sources and keep us honest, the power of Snopes and the rest of the “fact checkers” has grown immensely and ominously. Now, Snopes, the AP, and Politifact have woven themselves into the fabric of social media and have become the be all end all of “truth.” As a result of this new cozy relationship, they have the power to silence anyone they deem to be false—facts and reality be damned.

What’s more, if these new arbiters of online truth do deem content to be “false,” whether it is or not, the victims have zero recourse to challenge them and will see social media reach—no matter if it took years to build up—throttled and subsequently turned off.

But they are doing a service to weed out fake news, right? While Snopes and the like certainly do debunk many fake stories, the idea of solely relying on them for the truth is chilling.

Case in point. Within the last month, Snopes and the Associated Press both claimed that articles we wrote were false when they clearly were not. As a result of their illegitimate claims, the Free Thought Project has watched our website traffic drop.

On June 8, Snopes attempted to claim that a story we wrote about Veterans on Patrol was false by claiming that we said this veterans group discovered a child trafficking camp in Tuscon, AZ. The only problem with this claim is that we never made it. The Free Thought Project merely reported on the activities of VOP and noted the possibility that this camp could also simply be a homeless camp. It’s why we used quotes in the title around “Child Trafficking Camp” because these were their words, not ours.

Nevertheless, thousands of Facebook users who shared our article received a notification that they had shared news that was determined to be false—when, in fact, it was not.

While it is possible for Snopes to have mistaken our title for the claim they deemed false, the quotes around “child trafficking camp” imply that it was not our claim and that it required further reading. If they are “debunking” articles on headlines alone, they have no business being Snopes.

The Associated Press, on the other hand, did something far more sinister. The AP debunked a claim that no one said in a title, or article, or anything else for that matter. They made up a false claim and then said they debunked it. The AP then used this fake debunking to have one of our articles labeled as fake news and, yet again, thousands of readers who shared our article received a notification that they had been played and shared something false.

The article in question was titled, “Conspiracy Theory Proven Fact as Cops Remove Senator from Walmart Converted into Detention Center.”

It was no secret that conspiracy theories abounded in 2015 when Walmarts began shutting down across America. People created conspiracy theories that some of these Walmarts were going to be turned in detention centers. In 2018, this was confirmed as U.S. Senator Jeff Merkley (D-OR) attempted to enter the converted Walmart in Brownsville, TX.

At no point in the article did TFTP make the claim that DHS was working with Walmart to house immigrants, or that the Walmart corporation had anything at all to do with it.

In fact, inside the article, we explicitly pointed out who purchased the Walmart and who was running this detention center.

The detention facility is run by Southwest Key Programs, who promptly issued an apology to the Senator from Oregon on Wednesday for disallowing Merkley entry to its converted Walmart on Padre Island Highway in Brownsville.

The AP created a fake story and then debunked it, and the truth, our readers, and our social media presence suffered as a result.

It’s not just us either. On Thursday, the Time Magazine cover caused a firestorm of controversy as it showed a crying immigrant girl and Donald Trump. But Snopes came to the rescue once more to quash any disinformation.

When right-wing independent media outlets got word that this child in such an iconic and heart-wrenching image was not actually separated from her parents, they took this news and ran with it.

Headlines across the internet celebrated the fact that people had been duped into thinking this little girl had been separated from her parents. But she had not been.

To “debunk” this celebration by the right, Snopes claimed that no media outlets ever said this girl was separated from her parents.

“Contrary to claims, media outlets have consistently reported that the girl was never separated from her mother,” claimed Snopes.

However, Time Magazine had to issue a correction after claiming that the girl was carried away screaming by Border Patrol agents. The correction read as follows:

Correction: The original version of this story misstated what happened to the girl in the photo after she taken from the scene. The girl was not carried away screaming by U.S. Border Patrol agents; her mother picked her up and the two were taken away together.

Even California Congresswoman Lucille Roybal-Allard (R) held up a photo of the girl, next to her colleagues who were holding up signs that read, “Families Belong Together,” implying that the girl had been removed from her parents. But in reality, this poor little girl had been with her family the whole time.

Snopes went on to note that many outlets did, in fact, report that the little girl was never separated, and this was true. However, at least one very large media outlet, who used her photo on the cover, did not.

These little tidbits of information were conveniently absent from the story that Snopes had deemed “mostly false.” And, once again, the truth was bastardized and distorted in the name of “checking facts.”

Whether they are deliberately conspiring to censor news that is factual for political gain, or this is merely some new “fake news” algorithm in need of a serious overhaul, the results are the same. Truth is labeled as lies by those who claim to only tell the truth—and people trust them. A dangerous precedent, indeed.

If this sort of “truth policing” is allowed to continue in the authoritarian manner that it is, a handful of people, who we have just shown to be undeniably inaccurate, will control most information that people consume online. The end result of such an insidious practice will have dire consequences to all who seek a lesser ignorance. As Ron Paul famously said, this could all be happening because “truth is treason in the empire of lies.”