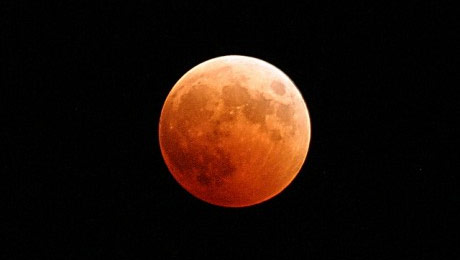 On July 27, the moon will glow a bright red-orange which will be seen around much of the globe during the longest lunar eclipse of this century.  As the moon passes through Earth’s shadow, some prophecize that the blood moon event is a significant one, signaling the end of the world.

Various publications are beginning to claim that there are “conspiracy theorists” who are prophecizing the blood moon as a sign of an oncoming apocalypse. Bible verses from the Book of Joel and the Book of Revelation seem to be citing in predictions that a glowing blood moon will accompany an ever-approaching end of days. Joel reads: “The sun shall be turned into darkness, and the moon into blood before the great and the terrible day of the Lord come.” Revelation states: “And I beheld when he had opened the sixth seal, and, lo, there was a great earthquake; and the sun became black as sackcloth of hair, and the moon became as blood.”

But don’t climb into your bunker just yet, as these same “prophets” have been wrongly interpreted the Bible several times over in the very recent past.

According to The Mirror UK, this doomsday hypothesis was originally made famous by Christian ministers John Hagee and Mark Biltz who said the ongoing “tetrad” – four consecutive lunar eclipses which began in April 2014 with six full moons in between – is the indicator of the end of earth as described in the Bible in Acts 2:20 and Revelation 6:12. However, the tetrad ended in September 2014 and we’re all still here.

The end-of-days preachers insist some sort of tragic event is set to hit earth and possibly wipe it out. But as Newsweek reports, it’s highly unlikely this will happen.  A number of articles focus on the work of evangelical Christian and end-of-days-prophecy peddler Irvin Baxter. The doomsday preacher is the face of EndTime Ministries, whose broadcasts and magazine are devoted to unraveling the weirder parts of Christian texts. However, even Baxter says the blood moon isn’t anything to be concerned about.

In a video released January 31, the date of a previous blood moon-cum-supermoon, EndTime Ministries’ End of the Age program called foretelling the future on the basis of celestial bodies “a sin” which should not be used to predict the end of days. This “sin” includes witchcraft, tarot cards, and necromancy, according to the ministry.

Baxter’s focus doesn’t appear to be on the blood moon or witches, though.  He seems to prefer his prophecy based on the Bible in which he claims that the United Nation’s condemnation of Israeli settlements was the first step towards the battle of Armageddon and that the election of Donald Trump will save the U.S. from “the one-world government ruled by the Antichrist.” “How can we be so sure?” Baxter’s website stated, “Because the Bible prophesies that this is the destiny of the United States, and the prophecies always come to pass!”