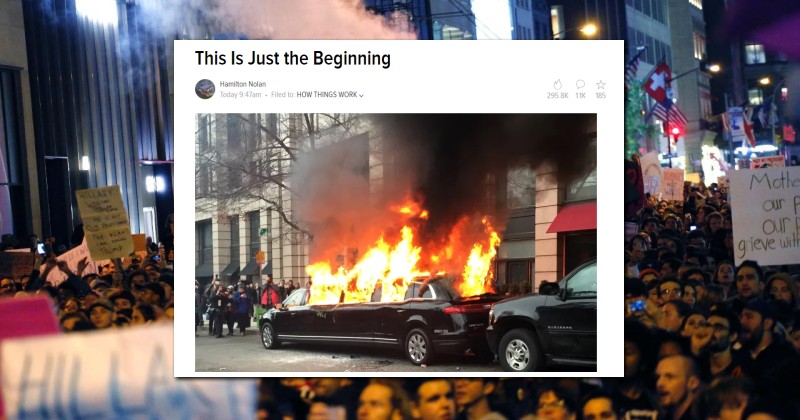 A far-left columnist for a website owned by Univision Communications has suggested that the next phase of the anti-Trump ‘resistance’ should take the form of domestic terrorism.

In an article entitled This Is Just the Beginning, Hamilton Nolan writes, “This is all going to get more extreme. And it should,” remarking that Trump administration officials should not be able “to live their lives in peace.”

“Read a fucking history book. Read a recent history book. The U.S. had thousands of domestic bombings per year in the early 1970s,” he adds, before predicting, “The day will come, sooner that you all think, when Trump administration officials will look back fondly on the time when all they had to worry about was getting hollered at at a Mexican restaurant. When you aggressively fuck with people’s lives, you should not be surprised when they decide to fuck with yours.”

Earlier in the piece, Hamilton tries to justify his alarmist rhetoric by asserting that the Trump administration is implementing “fascism” and “white nationalism” with its border policies.

“The people who are responsible for what is happening are not going to get out of this with their happy wealthy respectable lives unscathed,” he concludes, adding, “And the ones who make the laws are not going to like what happens when America starts to regard them as the criminals.”

The article was posted on Splinter News, a website owned by Univision Communications under its Gizmodo Media Group division. It is capped with a photo of a limosuine (owned by a Muslim immigrant who didn’t even vote for Trump) that was set on fire by anti-Trump demonstrators last year.

With the political climate becoming increasingly polarized, talk of a new “civil war” in America is heating up.

In an interview with Politico, historian Michael Beschloss said that the recent confrontations between activists and Trump administration officials is, “a new disheartening sign of a country that is becoming more divided by the hour.”

California Democratic Rep. Maxine Waters also told a rally on Saturday, “If you see anybody from that Cabinet — in a restaurant, in a department store, at a gasoline station — you get out and you create a crowd. And you push back on them. And you tell them they’re not welcome anymore, anywhere,” prompting some to accuse her of inciting violence.

That prompted Republican Congressman Steve King to respond with a tweet in which he suggested that America was heading for a second civil war.