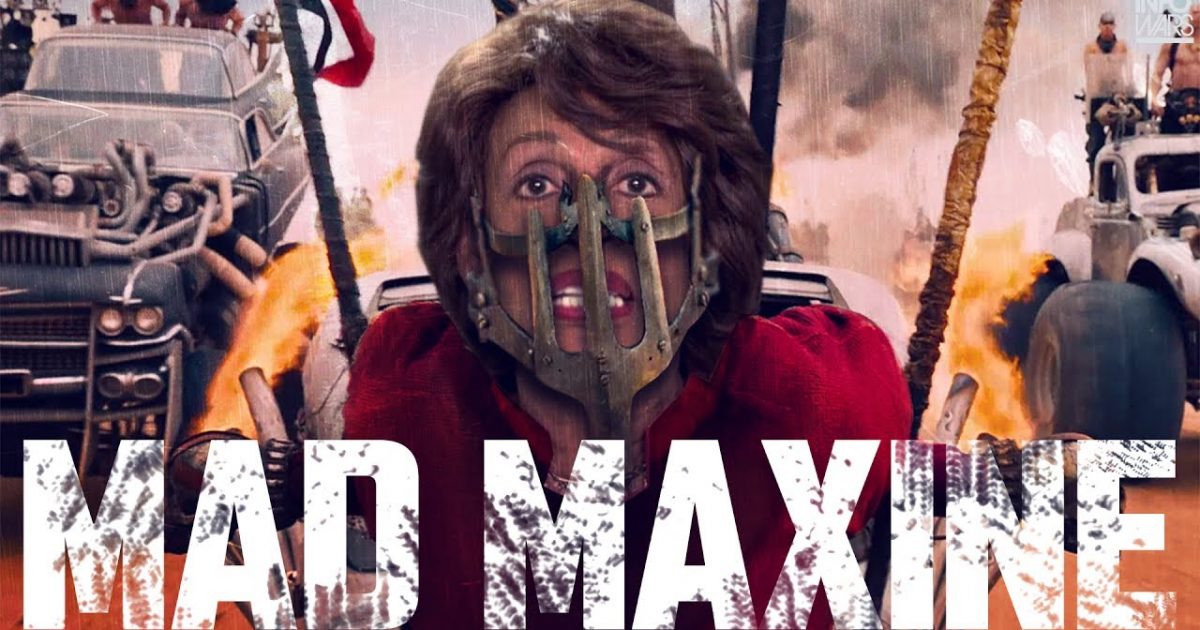 Actions have consequences, which is a truth Maxine “Mad Max” Waters is about to discover. After “Mad Max” appeared at a “Keep Families Together” rally on Saturday and called for harassment and violence against all Trump administration cabinet members if seen in public, several GOP lawmakers and a former White House press secretary have called for the House to censure “Mad Max.” The censure measure was accompanied by a request calling for Waters to resign.

Arizona Rep. Andy Biggs on Monday introduced a measure that would censure Rep. Maxine Waters and ask her to resign for inciting people to publicly confront Trump administration officials.

Biggs told The Hill that Waters’ comments do “not become somebody who’s in Congress” and warrant disciplinary action.

“So we just introduced it, we have some cosponsors, but what she did was to basically incite people to come after and attack members of the president’s cabinet,” the Arizona Republican told The Hill. “And also spread that out to more people.”

“Everybody agrees that it was just highly objectionable what she did,” he added.

The measure calls on Waters to apologize to Trump administration officials “for endangering their lives and sowing seeds of discord,” to release a statement making it clear that violence and harassment aren’t appropriate ways to protest, and finally to resign her House seat.

“There’s enough in this society, you don’t engage in those types of practices. And, Maxine basically denied that she called on people to harass others. No peace, no rest. So she is still sticking by what she has done,” said Fleischer. “The press needs to have a feeding frenzy among the left as they always do on the right. It’s her turn now. Frankly I’m at the point where, if she continues to double down the house ought to take up a motion to censure her. Because this does lead to violence.”

Five other members of the House have signed on to Biggs’ measure.

However, “Mad Max” countered the same day the censure measure was formulated, defending her position on MSNBC using “the children” as an excuse for her unethical, immoral, criminal behavior. Refusing to address anything except the children in order to deflect from her uncouth behavior and comments, Waters erupted into tears when confronted with “the fact that major Democrats are denouncing her harassment claims.”

“They don’t really say I’m out of line. What they do is try to find a way talk about civility without attacking me or anybody else as the leader of the Democratic Party, I expect that she would do everything that she could to make sure nobody believes that Democrats are out here harassing anybody or causing any violence,” Waters said of House Minority Leader Nancy Pelosi, who denounced Waters’ harassment comments Monday.

Video evidence, which “Mad Max” seems to think no one views or remembers, proved that the anti-constitutional Democratic base is harassing Trump administration officials and engaging in violence. Stalking is a crime, which happened to Sarah Huckabee-Sanders’ family when Red Hen restaurant owner, Stephanie Wilkinson, followed them to another restaurant, after refusing Huckabee-Sanders and family service, and began a protest. Issuing threats against individuals is a crime; so is trespassing. One senior DHS official discovered a “burnt and decapitated animal on the front porch of his home in Washington, DC.” Threats have been issued against ICE officers and their family members.

The dangers are very real and deadly serious. Breitbart reported, “aides to President Donald Trump are being advised to get guns and carry permits amid a growing threat of violence following comments by Rep. Maxine Waters (D-CA) and others.”

Buy guns. Vote. Violence is the next stop on the #MadMaxine slippery slope. We WILL fight back. https://t.co/BRBXAgXi5u

High level officials in the Trump administration, especially if their faces are likely to be recognized by many in the public as a result of appearances on TV, might want to consider applying for a license to carry a concealed weapon in the District of Columbia, and/or other states they frequent, in view of the call by Rep. Maxine Waters for the public to “absolutely harass” these officials in public places, and other recent events indicating the increased danger they are in.

Lott observed, “There are simply not enough police in D.C. or Virginia or Maryland to protect all Trump officials at their homes and when they go out to restaurants. Getting a concealed handgun permit would be helpful to protect themselves and their family.”

The criminal activity by anti-constitutionalists and the incitement to violence issued by “Mad Max” resulted in Republicans scrambling to formulate an “immigration reform bill.” While these individuals are busy protesting Republicans and those in the Trump administration, Democrats have repeatedly refused to address the “root causes” driving the illegal alien invasion of the united States through the southern border.

Multiple Republicans in the House and Senate crafted proposals in June to deal with family separation. They even went a step further, attempting to address both the causes and consequences of illegal immigration, like the lack of judicial infrastructure to deal with the massive waves of migrants entering the country illegally.

Trump and the White House spent the entirety of a week in June receiving criticism for the decision to enforce what is called a “zero tolerance” immigration policy, which resulted in the separation of children from their parents.

The policy was to separate children from their parents (or from the adult who brought them) who illegally immigrated to the U.S., arguing it is necessary to deter future individuals from crossing the border outside the proper, legal channels.

“Anyone who believes this Republican Congress is capable of addressing this issue is kidding themselves,” Senate Minority Leader Chuck Schumer said in a statement June 19. “The president can end this crisis with the flick of his pen, and he needs to do so now.”

President Trump did exactly what Schumer wanted – used his “pen and phone” unconstitutionally to address the family separation issue; however, that has been unsatisfactory to Democrats. The Democrats’ response surprised not one constitutionalist because that is how Democrats operate. All Republican-drafted immigration legislation has been rejected by Democrats, indicating the Democrat preference of a “catch and release” policy initiated under Hussein Soetoro.

Republicans succumbed to pressure exerted by Democrats to propose “the creation of 750 new immigration judges, new facilities to keep families together while they are being held, and an expedited pathway for those who immigrate illegally to see a judge and legally apply for asylum. If they are not granted asylum within a 14-day period after their hearing, the immigrant will be deported back to their home country.”

With many illegal alien invaders failing to appear at these hearings, the creation of more judges is not the answer. Neither is more facilities funded by taxpayers to house families together while being detained in order to attend hearings. Moreover, expediting a pathway for these invaders to apply for asylum legally fails to address the increasing invasion of the US by invaders reaching the southern border. What these suggested measures do is place more burden upon the taxpayer and expose this republic’s citizens to more criminals and ideology anathema to our culture of lawfulness.

If those in both chambers of Congress want to address separating families and the unaccompanied children abused by their own parents, the simple solution is to enforce immigration law, immediately deport all back to their country of origin, increase border security through all available means, and cease all immigration into the united States until these illegal alien invaders get the message – we have laws and borders; and, we intend to follow law and secure the border. But, none in the House and Senate are sincere about stopping the illegal alien invasion of the US because Republican donors need cheap labor and Democrats need votes, while Communists, Socialist, Marxists, and Fascists need illegal alien invaders to overwhelm our “welfare” system to crush this republic.

In the meantime, “Mad Max” could see her reaping what she has sown – her removal from the House, urged by Democrats and Republicans alike. Her ilk may reap the whirlwind of responding to her call for violence against Trump administration officials should these officials choose to follow good advice and “bear arms” in order to protect themselves and their family members. Newton’s Third law comes into play here; ” for every action, there is an equal and opposite reaction.” While Newton’s Third law applies to physics, it can also apply to blowback suffered because of one’s actions. Unfortunately, with the government involved, corrupt, unethical, immoral criminal politicians are a protected class, as are anti-constitutional domestic terrorist individuals, groups and organizations. But, with the responsibility of the citizen militia to enforce the law, anti-constitutional citizens may have bitten off more than they can chew. Make no mistake, it is time to re-establish the State citizen militias, which the Constitution provides provision. Should any individual feel their life is in jeopardy from anyone in these groups, the individual has the God-given right to protect that life, using as much force as is necessary, up to and including deadly force.

The percolating situation is a powder keg awaiting a spark to explode. Yet, no one in government is willing to deal with the problems – domestic terrorism by anti-constitutional individuals and groups and illegal alien invasion – using the Constitution. Instead, the “swamp” is content with responding in the “status quo” manner that will do nothing to address these issues. It means kicking the illegal alien invasion and domestic terrorism cans down the road, leaving these issues to continue to be unaddressed by future administrations. The problem with that non-solution is citizens lose while politicians continue to gain.