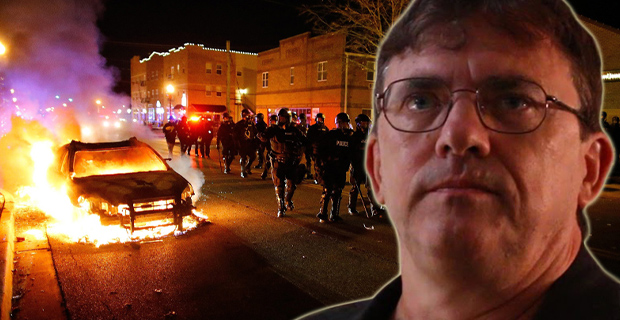 “Will it get worse? Probably”

In an op-ed for USA Today entitled Is America headed toward a civil war? Sanders, Nielsen incidents show it has already begun, Reynolds argues that the actions of Hollywood and the left in general signify that such a scenario is already “well underway.”

“Hollywood has basically turned its products, and its award shows, into showcases for “the resistance.” Americans are already sorting themselves into communities that are predominantly red or blue,” writes Reynolds.

He adds that White House Press Secretary Sarah Huckabee Sanders being kicked out of a restaurant in Lexington, Virginia, “because the owner and employees disliked her politics,” would have been “largely unthinkable a generation ago.”

“Will it get worse? Probably. To have a civil war, soft or otherwise, takes two sides,” writes Reynolds, before predicting that mobs of anti-Trump protesters will become increasingly violent as peaceful civil society is eroded.

Reynolds explains that the polarization can partly be blamed on the disintegration of churches, organizations and neighborhoods, which previously helped people build social ties that transcended politics.

“Those have shrunk and decayed, and in fact, for many people politics seems to have become a substitute for religion or fraternal organizations. If you find your identity in your politics, you’re not going to identify with people who don’t share them.,” he writes.

Reynolds concludes his piece by hoping Americans will realize how awful it is to have political divisions set “brother against brother” and avoid another “disastrous civil war.”

The professor’s sentiment is echoed elsewhere, with political scientist Thomas Schaller recently telling Bloomberg, “I think we’re at the beginning of a soft civil war. … I don’t know if the country gets out of it whole.”

In an interview with Politico, historian Michael Beschloss also said that the recent confrontations between activists and Trump administration officials is, “a new disheartening sign of a country that is becoming more divided by the hour.”

Republican Congressman Peter King also tweeted Sunday about how the country was heading towards a new civil war.

Meanwhile, in a New York Times piece that trended on Twitter entitled We Have a Crisis of Democracy, Not Manners, Michelle Goldberg largely endorsed Rep. Maxine Waters’ calls to harass Trump administration officials.

“I know of no left-wing publication that has…. run quasi-pornographic fantasies about murdering political enemies,” she writes, presumably unaware of a piece published just yesterday by Univision owned left-wing website Splinter News which tacitly encouraged domestic terror by remarking that Trump administration officials should not be able “to live their lives in peace” before mentioning that, “The U.S. had thousands of domestic bombings per year in the early 1970s.”