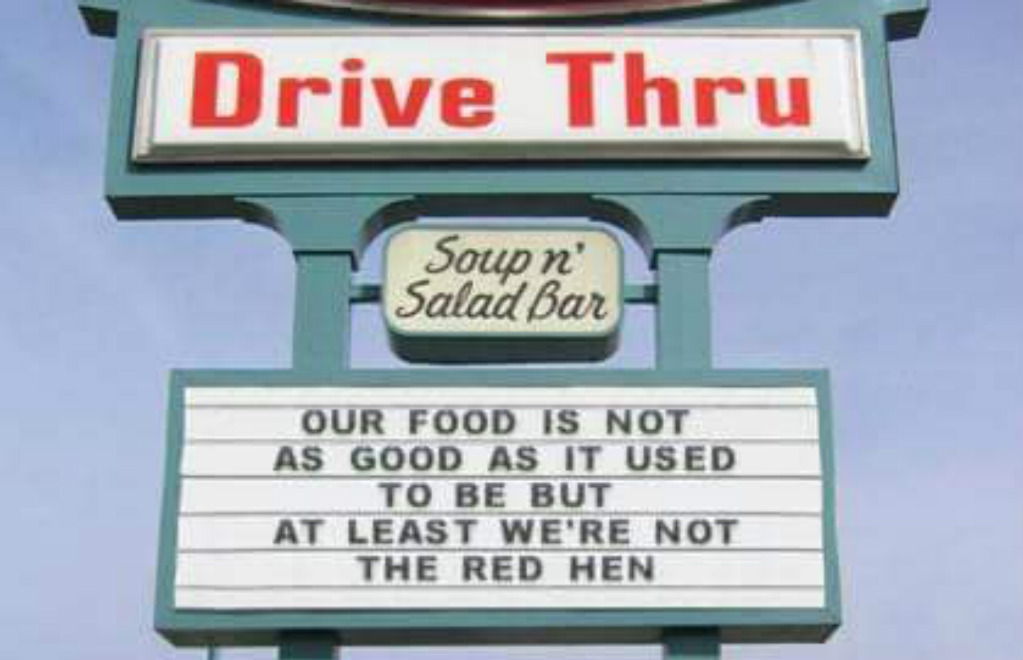 On Friday night, June 23, 2018, The Red Hen restaurant in Lexington, VA, became infamous when its co-owner Stephanie Wilkinson — who is also the director of Main Street Lexington, a civic organization that promotes the city’s businesses — booted out White House press secretary Sarah Sanders, who was accompanied by her in-laws.

Wilkinson claims that her restaurant employees objected to Sanders’ presence because of President Trump’s no-transgenders-in-the-US-military policy and his   determination to actually implement federal laws on illegal border-crossing.

Wilkinson, 55, who has a Ph.D. in European and American Religious History from the University of Virginia and is reputed to be a cousin of snake-tongue Meryl Streep, even followed Sanders’ in-laws to a restaurant across the street, and organized a protest outside the restaurant while the in-laws were dining. The irony is that Sanders’ in-laws are Democrats.

The blow back from Lexington against Wilkinson was swift.

Mere hours after Wilkinson kicked Sanders & Co. out of The Red Hen, Historic Downtown Lexington Virginia (HDLV) posted this on their Facebook page (Note the Facebook page is no longer available to the public, but the posts are preserved on Conservative Tree House, aka The Last Refuge):

And this formal statement (retweeted here):

We do not condone the actions of Stephanie Wilkinson owner of the Red Hen Restaurant and Director of Main Street Lexington.

She has embarrassed our town and has given Lexington a bad reputation. So many people are upset and the negative impact and nasty backlash towards our little community is downright appalling.

Our town is actually a wonderful place. Please do not condemn us for one persons [sic] action.

According to the Washington Post, “Lexington, population 7,000, had voted overwhelmingly against Trump in a county that voted overwhelmingly for him.” In the 2016 presidential election, Rockbridge County (Lexington is the county seat) voted for Trump 65.57% – 34.44% (Virginia Department of Elections).

On Tuesday, June 26, Stephanie Wilkinson resigned from her role as Executive Director of Main Street Lexington.

Elizabeth Outland Branner, the president of the organization, wrote in an email:

“Considering the events of the past weekend, Stephanie felt it best that for the continued success of Main Street Lexington, she should step aside.”