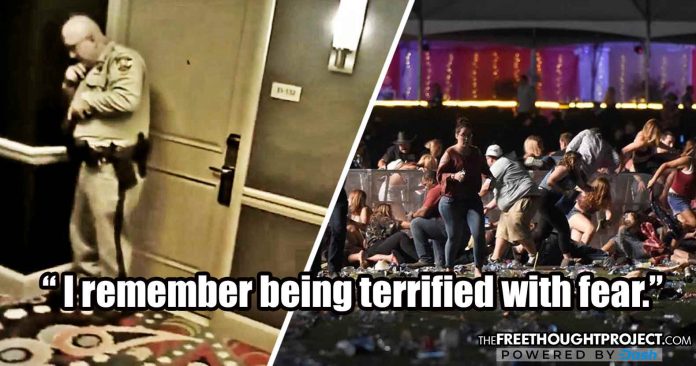 Las Vegas, NV — Sadly, the more information we receive from the worst mass shooting in modern American history, the less coverage it gets by the mainstream media. Damning footage contradicting official timelines and LVMPD documents have surfaced and they barely register as a blip on the media’s radar.

After being forced to release information on the October 1 massacre, the Las Vegas police department—in an insultingly futile attempt at transparency—has been dumping information related to the shooting. In what appears to be a deliberate attempt to muddy the waters, much of the video released by the department has no time stamps and is provided without context.

Like all the previous footage, the latest body camera video to be released lacks a time stamp. However, because we know that Stephen Paddock — according to the official timeline and citizen videos of the incident — initially opened fire at 10:05 p.m. and did not stop shooting until 10:14 p.m., we now know that officers were inside the hotel and could’ve engaged him—contrary to what we’ve been told.

The new video puts officer Cordell Hendrex on location and only one floor below Paddock during the shooting. Hendrex and his rookie partner are seen on camera walking down the hall of the 31st floor as Paddock murders people on the ground below.

“Holy fuck,” Hendrex says when he hears the sound of shots above him. Hendrex could’ve run to the stairs, gone up a single floor and engaged Paddock and saved countless lives. Instead, he called everyone back and cowered in fear.

Nearly five minutes would pass as Hendrex and the rookie stood still inside the hallway instead of engaging the shooter. Although we don’t know exactly when the video takes place, we do know that standing in the hallway and not engaging Paddock allowed it to continue.

Despite refusing to comment on the specific video showing the officers waiting in the hallway instead of engaging the shooter in the room they knew he was in, the department released a statement noting that they are investigation the actions of all officers.

“Every officer’s actions that night are being evaluated,” Metro spokeswoman Carla Alston said in a statement Wednesday. “One of the things Sheriff (Joe) Lombardo has said from the beginning is that this is an ongoing investigation. Part of that investigation is the evaluation of the performance, actions and conduct of every officer and civilian employee involved in the incident.”

According to Hendrex’s previously released report, he and the rookie, were already in the hotel citing two women for trespassing when the shooting began.

As the Las Vegas Review-Journal reports:

The first 30 seconds of footage contain no audio, but about 22 seconds in, the officers can be seen walking out of the security office and onto the casino floor, accompanied by the three armed guards. A few seconds later, the audio cuts in, and the words “active shooter” can be heard in the background.

For about two minutes, the group walks past slot machines and casino patrons as police radio transmissions describe what is unfolding at the festival grounds. It is not until another officer broadcasts over police radio that shots are coming from Mandalay Bay that the group begins running and makes it to an elevator, hopping in front of hotel guests waiting with their luggage.

Inside the elevator, the group discusses the 32nd floor — where the shooter is located — and the 31st floor. For unknown reasons, Hendrex and Varsin get out on the 31st floor with the armed guards, pistols drawn.

The next nearly five minutes take place in a hallway on the 31st floor, directly beneath the gunman.

“I know I hesitated and I remember being terrified with fear and I think that I froze right there in the middle of the hall for how long I can’t say,” Hendrex would later write in his report.

While the group cowers in fear, security gets over the radio and says, “We know where it’s at, the 32nd floor, room 135. Everyone else off the radio. I’m with Metro now.”

The group did not budge.

“We’re taking gunfire,” an officer on the ground says over the police radio. “It’s going right over our heads. We’re pinned down here with a bunch of civilians.”

Hendrex “once again hesitated” and “did not know what to do next,” according to his report.

“We can’t worry about victims,” a different officer can be heard broadcasting over police radio a few seconds later. “We need to stop the shooter before we have more victims. Does anyone have eyes on the shooter?”

Knowing exactly where the shooter is, Hendrex chooses not to respond to the call. He then walks off.

“Where are you going, sir?” his trainee asks. Hendrex replies with an inaudible response and the two walk off.

We now know that Las Vegas Police could’ve engaged Paddock before he stopped shooting on his own. Lives could’ve been saved. Instead, police would wait nearly an hour before they breached the door and entered the hallway at 10:57 p.m.

“In a case like this, I think it’s our responsibility to get in there as fast as possible. Would that have saved lives? Probably, if it went well,” Michael Quinn, an expert in law enforcement tactical training and use of force told the Review-Journal in regard to Hendrex’s actions. “Would it have cost them their lives? Yes, absolutely. That’s part of the job.”

Unfortunately, for the 58 dead and 800 wounded, that did not happen. And police, who claim to “put their lives on the line every day” to protect us, stood there as a mass murderer carried out his sick desires unchallenged.