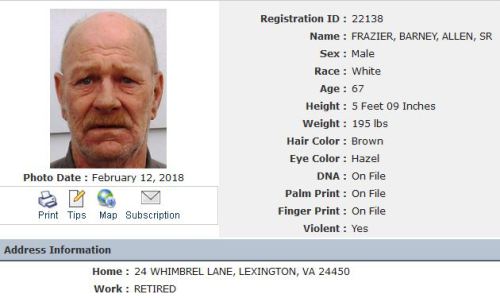 On the night of June 23, Stephanie Wilkinson, co-owner of The Red Hen restaurant in Lexington, VA, kicked out White House press secretary Sarah Sanders and her in-laws  simply because Sanders works for President Trump. The rabid Wilkinson even pursued and harassed the in-laws when they went to a restaurant across the street.

Outraged by Wilkinson’s behavior, AltMedia netizens went to work to dig up information. Four especially sensational claims are made:

I spent hours yesterday to verify those claims. This is what I found.

To begin, I received an email with an unsourced image of a purported Health Department Report on a recent inspection of The Red Hen on April 8, 2018, listing the following health hazards:

I cannot confirm the above Health Department Report.

The city of Lexington is in Rockbridge County in the Shenandoah Valley of Virginia.

According to Central Shenandoah Health District’s website, there have been four inspections of The Red Hen, the most recent of which was on February 6, 2018, which found no risk factors:

The health inspection on January 24, 2017 cited The Red Hen for one violation, which was immediately corrected:

The most critical health inspection report of The Red Hen was four years ago, on April 8, 2014, which found these violations:

None of the four inspections of The Red Hen found a rat infestation.

To begin, Stephanie Wilkinson also owns House Mountain Yarn Company and is identified on its website as having “co-founded” The Red Hen restaurant, which implies she’s a co-owner.

A comment made by someone named “Kevin Gardner” has been disseminated in the AltMedia in tweets and a YouTube video, but to my knowledge, no one has been able to determine who “Kevin Gardner” is, whether he indeed had worked at The Red Hen, or the truth of his incendiary claim that Red Hen has a silent partner named Allen Frazier, who is a registered sex offender.Below is a screenshot of Gardner’s comment:

According to the Virginia State Police’s Sex Offender Search Registry, there indeed is a sex offender named Barney Allen Frazier, Sr., 67, of 24 Whimbrel Lane, Lexington, VA 24450, who was convicted on June 13, 2007, for “indecent liberties with [minor] child by custodian”. Frazier was registered as a sex offender on Oct. 11, 2007, and renewed the registration on May 3, 2018.

Here’s a screenshot from the Registry‘s webpage on Frazier:

While there indeed is a registered sex offender living in Lexington who is named (Barney) Allen Frazier, does this mean he is a silent partner of The Red Hen restaurant?

According to TruthFinder, Barney Allen Frazier, 67 (will be 68 on June 30), was arrested and charged with having committed a felony of “indecent liberties with a child” in 2006, for which he pled guilty on October 25, 2006, and had his sentence of 4 years 230 days suspended in favor of probation and supervision upon release.

Frazier owns his 3-bedroom 1-bath 988 sq. ft. home in Lexington, which has an assessed value of only $115,400. Frazier’s modest assets make it unlikely that he’s a silent partner of The Red Hen or of any other business.

(3) STEPHANIE WILKINSON IS A PEDOPHILE?

There are other claims made about Stephanie Wilkinson, one of which is that she may be a pedophile, judging by an image of her in a necklace with a spiral pendant (source: @EmptyNesterinVA):

If you recall, the FBI has identified the spiral as a pedophile symbol:

Adding to Wilkinson’s spiral-pendant necklace is a pic of Tina Miller, a colleague or staff at House Mountain Yarn Co., wearing a necklace with what appears to be a spiral-triangle pendant: