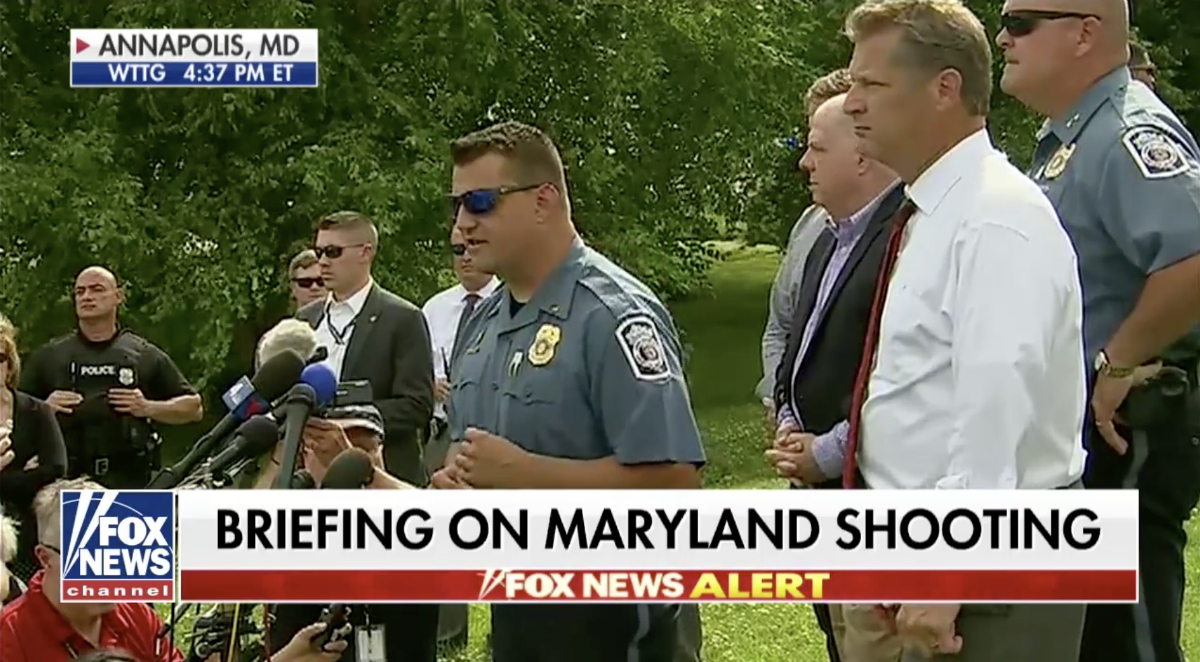 (Natural News) A gunman walked into the Capital Gazette newspaper in Annapolis, Md., Thursday afternoon and opened fire on staff, according to multiple reports.

“Gunman shot through the glass door and opened fire on multiple employees. Can’t say much more and don’t want to declare anyone dead, but it’s bad,” Phil Davis, a reporter for the newspaper, which is owned by the Baltimore Sun, wrote on Twitter. “There is nothing more terrifying than hearing multiple people get shot while you’re under your desk and then hear the gunman reload.”

In a follow-on interview, Davis described the scene in a similar way others involved in such incidents describe it — “like a war zone.”

“I’m a police reporter. I write about this stuff,” he noted, “not necessarily to this extent, but shootings and death — all the time,” he added. “But as much as I’m going to try to articulate how traumatizing it is to be hiding under your desk, you don’t know until you’re there and you feel helpless.”

Maryland, by the way, has some of the nation’s toughest gun control laws — laws that criminals and crazies ignore but law-abiding people like Phil Davis abide by, and are victimized by.

Davis said that he and others were still hiding under desks when the shooter stopped firing. He added that he had no idea why he stopped.

Police also went to the newsroom of The Baltimore Sun, after police received a call there was an active shooter there. That turned out to be false.

As of this writing, five people had been killed, according to police, who added the suspect is a white male in his 20s who is in custody but who did not have identification on him. Fox News reports that several more were wounded.

As for weapons, CBS News reported that he used a shotgun. Those haven’t really been targeted in any recent Maryland gun control legislation, but presumably, it’s against state and/or local laws in Annapolis to carry a loaded shotgun into town.

At this point the motive for the shooting is unclear. But one thing is clear: The media has been whipping people into a frenzy over a variety of issues for months. (Related: Journo-terrorism media now painting Trump VOTERS as “Nazis” who deserve to be murdered in the streets)

Regardless of the motivation of the shooter, you can bet real money that some liberal whack job somewhere (in the media) will suggest that the shooting was Trump’s faultbecause he’s been so critical of the press — which, of course, has been unfairly critical of him, publishing all sorts of innuendo, fake news, and outrageous, threatening comments.

Rep. Trey Gowdy, R-S.C., said it today when he was admonishing Deputy Attorney General Rod Rosenstein and FBI Director Christopher Wray to either produce evidence to a grand jury that President Trump and/or his 2016 election staff did something illegal or wrap up the investigation because it’s “tearing our country apart.”

As for the gun control in Maryland, it obviously doesn’t work. If the soaring murder rate in Baltimore wasn’t evidence enough, then this incident helps prove it.

All gun control laws do, as Davis, the police reporter recounted, is turn honest people into helpless victims. Imagine if he or someone else in that office had been armed; the shooter would never have had a chance to “reload.”

We’ll be monitoring this story for developments.

Keep current on this and related stories involving shootings at Shootings.news.