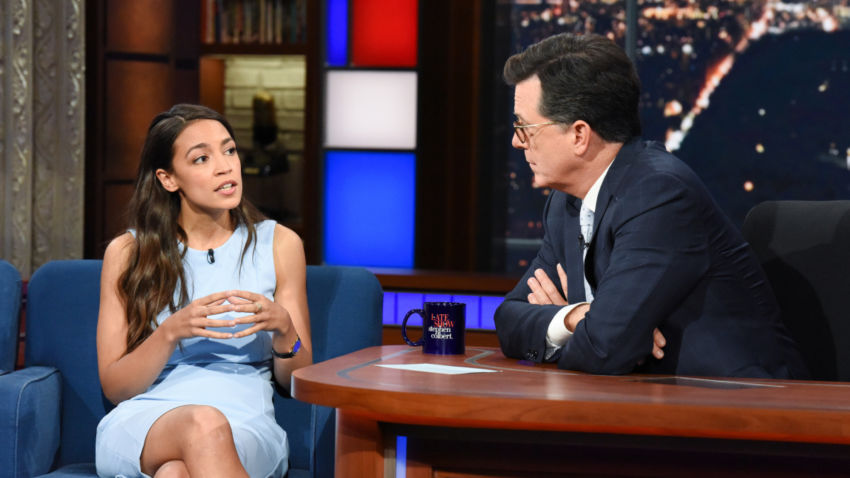 I wasn’t born to a wealthy or powerful family — mother from Puerto Rico, dad from the South Bronx. I was born in a place where your Zip code determines your destiny.  -Alexandria Ocasio-Cortez Source

This week 28 year-old Alexandria Ocasio-Cortez has been the toast of The Socialist Left since defeating establishment Democrat Joe Crowley in the primary.

Now she is, barring a miracle upset, headed for Congress.

But is she really who she says she is?

Much of her campaign has been centered around a working “girl from the Bronx” image.

The mainstream liberal media is certainly going right along with that narrative. The New York Times paints her story as a classic American success story:

At the Parkchester apartments in the Bronx, neighbors heard the news from a maintenance worker: The woman down the hall had just won a primary and was probably headed for Congress. At a popular restaurant in Union Square in Manhattan, workers struggled to comprehend that the young politician whose face was all over TV really was the same woman who had tended bar until a few months ago.

Ms. Ocasio-Cortez, whose résumé up to now included waitress, children’s-book publisher, community activist, member of the Democratic Socialists of America and former Bernie Sanders campaign organizer, was now something else: an instant political rock star. She stunned the Democratic establishment by beating one of the senior leaders in the House, Joseph Crowley, in a near-landslide in Tuesday’s primary.

What has been conveniently left out is everything in between.

For most of her formative years, Ocasio-Cortez was actually raised in one of the United States’ wealthiest counties.

Around the age of five, Alexandria’s architect father Sergio Ocasio moved the family from the “planned community” of Parkchester in the Bronx to a home in Yorktown Heights, a wealthy suburb in Westchester County. The New York Times describes her childhood home as “a modest two-bedroom house on a quiet street.” In a 1999 profile of the area, when Ocasio-Cortez would have been ten years old, the Times lauded Yorktown Heights’ “diversity of housing in a scenic setting” – complete with two golf courses.

Westchester County – which the Washington Post, in a glowing profile on Ocasio-Cortez, describes as only “middle class” – ranks #8 in the nation for the counties with the “highest average incomes among the wealthiest one percent of residents.” According to the Economic Policy Institute, the county’s average annual income of the top one percent is a staggering $4,326,049.

Yorktown Heights, specifically, offers a sharp contrast from Bronx living. According to USA.com, the town’s population is 81 percent white, and median household income is $96,413 – nearly double the average for both New York state and the nation, according to data from 2010-2014.

Does this sound like a woman that grew up with a “working class” family? I’d venture a guess that an architect father did not struggle to make ends meet in a wealthy suburb.

There is nothing wrong with a Father who does his best to provide for his family. But Bronx residents are being grossly misled.

This woman grew up in a wealthy community. That is not a typical Bronx experience.

She is not lying directly, but not telling the whole truth while letting people believe what they want to believe.

Who does this woman remind you of?

Does, her mentor, Bernie Sanders come to mind?

Zero Hedge’s Tyler Durden summed it up best by saying, “We wonder how long it will take Ocasio-Cortez to ride the ‘Democratic Socialist’ wave until she’s firing off tweets from her third home and making $1 million, two years in a row, like Bernie Sanders.”

It’s all smoke and mirrors America.