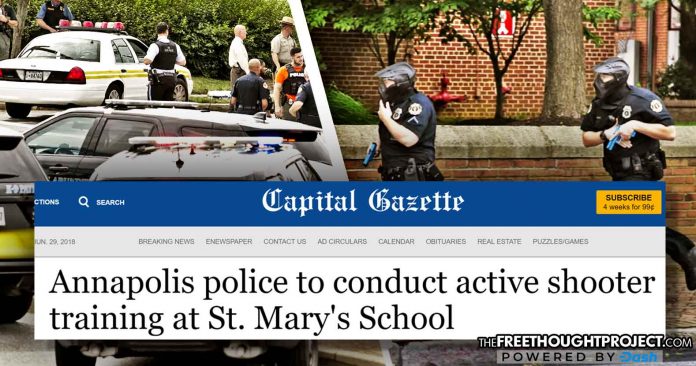 Annapolis, Maryland – Five people were killed in another mass shooting after a man opened fire at the Capital Gazette newspaper on Thursday afternoon, in what is being called a “targeted attack” by a deranged individual who reportedly went as far as mutilating his own fingers in order to keep police from identifying him.

Fueling conspiracy theories online, just one week before the shooting at the newspaper’s headquarters, the Capital Gazette reported that “Annapolis Police will be conducting an active shooter drill.”

The Annapolis Police Department released a statement claiming that residents “should be aware that real-life sights and sounds may be seen and heard along the periphery of the campus and a variety of emergency response vehicles will be in the area.”

Annapolis Fire Department Spokesperson Ken White said that the drill was being held “just in case… we have an active shooter here in Annapolis,” and insisted that “with the increase of active shooter incidents we are seeing, the city has determined that it’s important for us to hold this training so that in the event that something may happen, we will be well-prepared.”

As TFTP has reported, similar drill situations played out during the September 11, 2001 World Trade Center attacks, the July 7, 2007 London subway bombings, the Parkland shooting, and the Paris theater attack on November 13, 2015—which all saw training drills taking place virtually simultaneously to the real-life event for which they were training.

Obviously, coincidences do happen, but the odds of these drills being run in such close proximity to the actual events being trained for seems remote enough to point out.

Jarrod Ramos, 38, was charged with five counts of first-degree murder on Thursday night, and while he appears to be quickly apprehended by police, it took several hours for officers to identify him. Reportsclaimed that he “refused to talk to investigators or give his name,” and that he “was not carrying any identification.”

Ramos even went as far as to mutilate his own fingers, in an attempt to avoid being identified by police. However, while police have not said whether facial recognition was used to determine the suspect’s identity, they claim they eventually ID’d him because he had a longstanding feud with employees at the newspaper.

When the shooting began, employees crawled under their desks for cover, and County Executive Steve Schuh said that when the suspect was found, he was also hiding under a desk, and since he was in custody, “he’s not been particularly cooperative.”

Suspect in the Capital Gazette shooting “has not been particularly cooperative,” Anne Arundel County Executive Steve Schuh says, adding that the suspected shooter was “trying to evade law enforcement. He was hiding in the building, and we found him.” https://t.co/Yq6Qc2B9pm pic.twitter.com/ElgrCIvJfP

More than 170 employees were inside the building of the Capital Gazette, serving as a reminder that the death toll could have been much worse. The Baltimore Sun reported that Ramos targeted the newspaper specifically because he has been in an ongoing feud with its employees for the last 7 years.

After a columnist for the newspaper wrote about a criminal harassment case against Ramos in 2011, he filed a defamation lawsuit against the columnist, and the paper’s editor and published in 2012. A court ruled in favor of the Capital Gazette employees, and an appeals court later upheld the ruling.

Ramos has also been accused of making threats against the organization on social media from a Twitter account with his name and a bio that read, “Dear reader: I created this page to defend myself. Now I’m suing the shit out of half of AA County and making corpses of corrupt careers and corporate entities.”

The account had around 100 Tweets, and the last one was posted in January 2016—until Thursday, when a new Tweet was posted at 2:37 p.m. that simply read, “Fuck you, leave me alone.” The shooting began around 2:40 p.m.

The banner of the account included photos of Thomas Marquardt, the paper’s former editor and publisher who was named in Ramos’ defamation lawsuit, and The Capital’s former owner, Philip Merrill, according to the report.

Marquardt told the Baltimore Sun that he was not surprised that Ramos was accused of the attack because he had been harassing the newspaper for years. “I remember telling our attorneys, ‘This is a guy who is going to come in and shoot us,’” he said.

“I was seriously concerned he would threaten us with physical violence,” Marquardt said. “I even told my wife, ‘We have to be concerned. This guy could really hurt us.’”

While Ramos does show signs of being disturbed individual who could have convinced himself that he had reason to retaliate again the Capital Gazette, his similarities with most mass shooters stop there.

While it is not yet clear whether Ramos struggled with depression of anxiety, or he had been prescribed any psychotropic drugs with dangerous side effects that would have aided his erratic and violent behavior, it is clear that he was not carrying out the shooting for the fame.

In contrast, Parkland shooter Nickolas Cruz filmed a series of chilling videos of himself commenting on how he was going to be “the next school shooter of 2018,” and claiming, “When you see me on the news, you’ll know who I am.” He fit the description of the typical mass shooter who felt like an outcast and was seeking fame and media attention.

Jarrod Ramos seems to be a different case. He opted to use a shotgun instead of an AR-15, which has been deemed an “assault rifle.” He was not armed with hundreds of rounds of ammunition, and he did not want police to know who he was. However, one similarity remains—Ramos clearly had mental health problems and was known for his threats against the newspaper.

While police officers arrived at the scene as soon as they could after they were alerted to the shooting, this shooting should serve as a reminder that if the employees at the Capital Gazette had been allowed to carry concealed weapons, they might have been able to take down the gunman and end his rampage before police could even get to the scene.