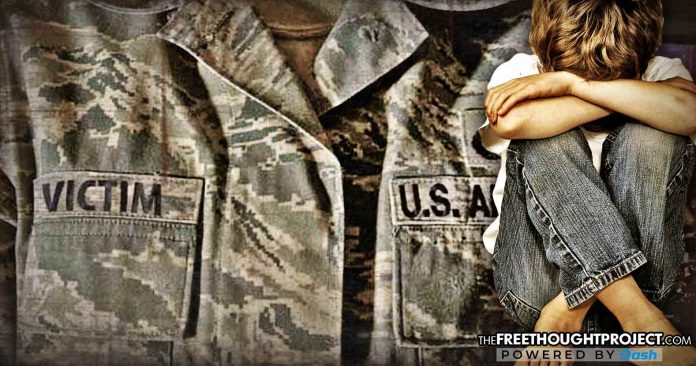 In an appalling move that has shocked many, the United States Air Force has declined to charge a senior military colonel and doctor who was accused of brutally raping and physically abusing two young boys, despite overwhelming evidence against him.

Air Force Col. Eric Holt, 48, was accused of sexually assaulting a young child in 2016 while he was working as an anesthesiologist at the Uniformed Services University of Health Sciences. According to documents from the case, reported by USA Today, an elementary-school-aged boy told his mother and two other witnesses that Holt raped him, and he had physical injuries from the abuse.

“In October 2016, allegations of sexual abuse arose after one of the boys returned from a visit with Holt. The boy awoke the night of Oct. 13 having soiled himself, according to the June 14 memo to Maj. Gen. James Jacobson, the officer deciding whether Holt would be charged.

As his mother cleaned him up, the boy told her that Holt ‘pulls on his penis and puts his fingers in his bottom.’ Crying, he told two other women in the home the same story. A photo of his bruised penis and a statement from one of the women were left out of the investigative report by the Air Force, according to the memo.”

A second young boy testified that he had been raped and assaulted by Holt, and he also showed signs of trauma with bruises, cuts and a black eye. Lawyers for the two boys argued that there was clearly “sufficient factual basis” to charge Holt for the abuse, given the presence of both photographic evidence and “expert testimony supporting the veracity of their allegations.”

However, photos of the injuries, and testimony from the witnesses who spoke with the young boys were not included in the investigation conducted by the Air Force, and Holt’s history as a wounded combat veteran was likely highlighted instead.

Holt was working as a battlefield physician for the Air Force, and on his fourth deployment when he was wounded by an improvised explosive device during a night-time raid in Afghanistan in 2009. He was left with extensive injuries to his face, skull, and spine, and he endured years of treatment and recovery.

No matter the traumatic injuries Holt survived, or how the Air Force may claim he “served his country” while he was deployed, it does not take away from the fact that he was accused of brutally raping and assaulting at least two young boys, and the allegations against him should stand alone.

In defense of the decision not to press charges, a spokesman for the Air Force, Lt. Col. Brus Vidal, released a statement insisting that “the Air Force investigated the allegations, reviewed evidence and assessments from Maryland law enforcement and child service agencies and then determined there was not sufficient evidence to support the allegations.”

“The Air Force retained a civilian expert in forensic psychology to evaluate the evidence; the expert’s analysis deemed there was insufficient evidence to proceed,” Vidal said. “Maryland law enforcement and child services agencies’ investigations also found the evidence against Col. Holt was inconclusive.”

However, Air Force Captains Lauren Kerby and Stephanie Howell, who are serving as lawyers for the two young boys who claim they were abused by Holt, are maintaining that the investigation “wrongfully omitted highly relevant information in this case.”

The lawyers cited the opinion of a licensed psychologist, who found the boys to be credible, along with photos the injuries their injuries and statements from the boys and other witnesses, which they claim they should have easily implicated Holt in this case.

Yet the charges were dismissed because the Air Force claimed the evidence was “inconclusive.”

Members of Congress have responded by pushing for a new investigation in the case. In a letter to the Air Force, New York Sen. Kirsten Gillibrand, and Massachusetts Reps. Joe Kennedy and Niki Tsongas pleaded on behalf of the victims:

“We are concerned that the safety of the children in this case could be seriously undermined because of reported actions taken by members of the command and Air Force Office of Special Investigations, which suggest that the Air Force’s own procedures and policies were not followed. Among our concerns is that qualified and trained military prosecutors and civilian experts in the Air Force whose job is to provide essential expertise, advice and input on these types of cases were potentially precluded from participating in review of this case.”

While the facts that have been released this case are horrific, this is not the first time an individual with power in the U.S. military has been accused of sexually assaulting the patients in his care. In another case, a military psychologist was recently arrested for sex assault after multiple rape victims he was working with accused him of misconduct and claimed that they are now “even more traumatized” because of the abuse they endured at the hands of the man who was supposed to help them.