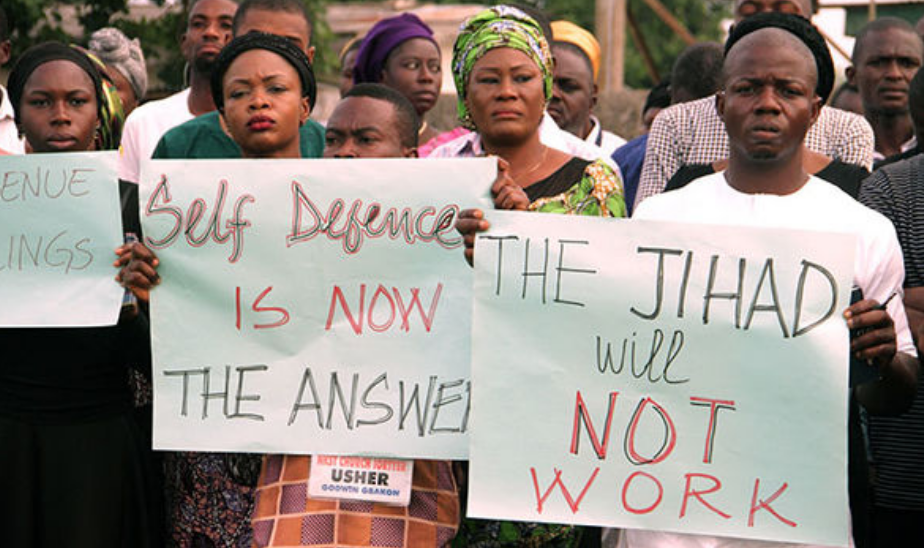 The silence by leftwing media-run outlets (in other words, press across the world) is deafening. The UN was not available for comment.

Christians slaughtered by the hundred — 6,000 (mainly women, children and the aged) so far this year.

Where is the outrage of the left at the persecution of the vulnerable?

Where is the voice of “Black Lives Matter” protesting against so many black lives lost?

Where are the lamentations of the feminists over the slaughter of women?

All remain still, all keep silent, for these are the deeds of Islam.

THOUSANDS of men, women and children have been killed in Nigeria in what the country’s Christian community are condemning as “ethnic cleansing”.

Last weekend 238 Christians were killed in a number of attacks by militia in Plateau State, a region in the heart of the country.

Campaigners are warning it is just the latest example of “pure genocide” in a country ravaged by religious division.

A joint statement issued by the Christian Association of Nigeria said more than 6,000 Christian worshippers – “mostly children, women and the aged” – had already been killed this year.

They said: “There is no doubt that the sole purpose of these attacks is aimed at ethnic cleansing, land grabbing and forceful ejection of the Christian natives from their ancestral land and heritage.

“What is happening in Plateau state and other select states in Nigeria is pure genocide and must be stopped immediately.”

They said those responsible were being allowed to “go scot free” and said the Nigerian government was wrongly trying to paint the attacks as “farmers/herdsmen clashes”.

“How can it be a clash when the herdsmen are hunting farmers in their own villages/communities and farmers are running for their lives?”

Protestors calling for an end to attacks on Christians in Nigeria

They said the police service was “skewed” against Christians and even accused the government of being “lukewarm” in its attempts to free the Chibok schoolgirls.

Nigeria is one of the world’s most dangerous countries to be a Christian with anti-persecution organisation Open Doors ranking it 14th on its annual watchlist.

They said Islamic extremism, especially in the north of the country, was leading to “hostility towards Christians”.

Open Doors said: “Believers experience discrimination and exclusion, and violence from militant Islamic groups, resulting in the loss of property, land, livelihood, physical injury or death. This is spreading southwards.

“Corruption has enfeebled the state and made it ill-equipped to protect Christians. Rivalry between ethnic groups and raids by Fulani herdsmen compound the persecution.

“Converts face rejection from their Muslim families and pressure to recant.”