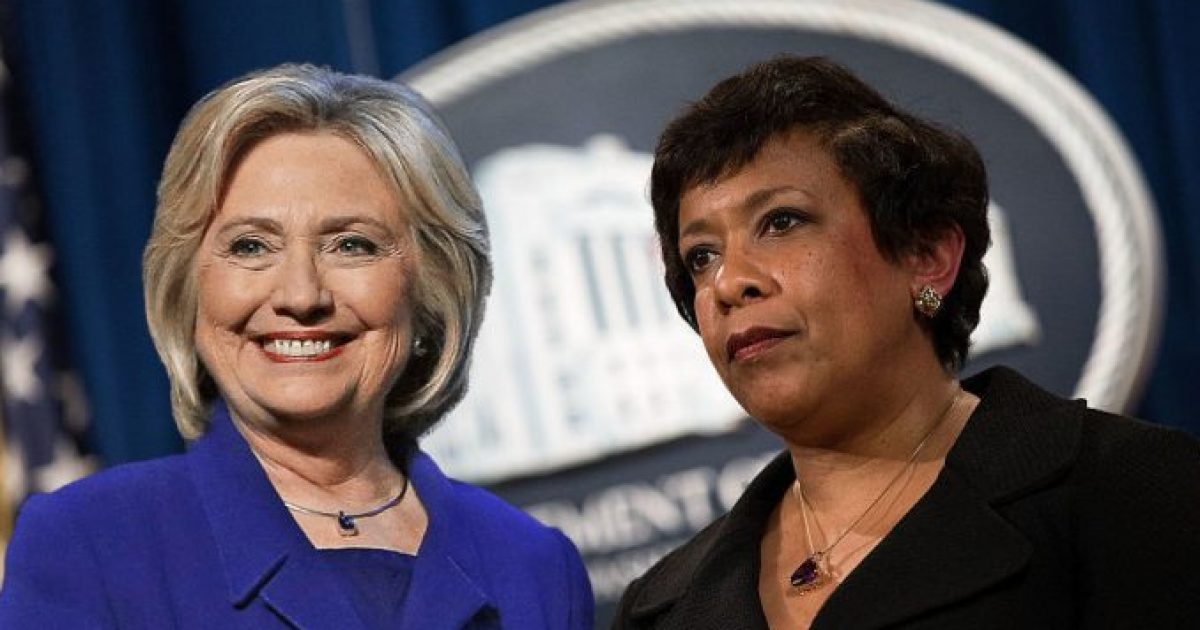 We have theorized that former Attorney General Loretta Lynch more than likely engaged in corrupt behavior when she met former President Bill Clinton on the tarmac prior to the 2016 elections, in which she claims that they talked about golf and grandchildren, but what we are learning now is that a new report is out that claims the FBI is unwilling to provide members of Congress with top security clearance intelligence that the Obama AG interfered in the FBI’s investigation of Hillary Clinton‘s illegal email server

The FBI had little problem leaking “unverified” dirt from Russian sources on Donald Trump and his campaign aides – and even basing FISA wiretaps on it. But according to the Justice Department’s inspector general, the bureau is refusing to allow even members of Congress with top security clearance to see intercepted material alleging political interference by President Obama’s attorney general, Loretta Lynch.

That material – which has been outlined in press reports – consists of unverified accounts intercepted from putative Russian sources in which the head of the Democratic National Committee allegedly implicates the Hillary Clinton campaign and Lynch in a secret deal to fix the Clinton email investigation.

“It is remarkable how this Justice Department is protecting the corruption of the Obama Justice Department,” said Tom Fitton, president of Washington-based watchdog Judicial Watch, which is suing for the material.

Lynch and Clinton officials as well as the DNC chairman at the time, Debbie Wasserman Schultz, have denied the allegations and characterized them as Russian disinformation.

True or false, the material is consequential because it appears to have influenced former FBI Director James B. Comey’s decision to break with bureau protocols because he didn’t trust Lynch. In his recent book, Comey said he took the reins in the Clinton email probe, announcing Clinton should not be indicted, because of a “development still unknown to the American public” that “cast serious doubt” on Lynch’s credibility – clearly the intercepted material.

If the material documents an authentic exchange between Lynch and a Clinton aide, it would appear to be strong evidence that the Obama administration put partisan political considerations ahead of its duty to enforce the law.

Sperry went on to write:

The information remains so secret that Justice Department Inspector General Michael Horowitz had to censor it from his recently released 500-plus-page report on the FBI’s investigation of Clinton, and even withhold it from Congress.

The contents of the secret intelligence document — which purport to show that Lynch informed the Clinton campaign she’d make sure the FBI didn’t push too hard — were included in the inspector general’s original draft. But in the official IG report issued June 14, the information was tucked into a classified appendix to the report and entirely blanked out.

It’s totally disturbing that a woman with a corrupt history like Hillary Clinton and those involved such as her husband Bill, corrupt AG Lynch and the usurper-in-chief Barack Hussein Obama Soetoro Sobarkah, are able to be whitewashed while the American people are denied the truth.

Subpoenas could be issued but as Sperry writes, it seems likely due to Senator Dianne Feinstein’s corrupt ties to Lynch top aides at the Department of Justice.

On Thursday, [Senator Charles] Grassley announced he wants to subpoena Lynch to testify before his committee about her role in the Clinton email probe. But he said he has to first convince the top Democrat on the panel, Dianne Feinstein, who seems disinclined to support issuing a subpoena. “The ranking member refused to agree to compel” Lynch to testify, Grassley said in a statement earlier in the week.

Under Judiciary Committee rules, the chairman and the ranking member must both agree on the use of subpoenas.

Hill sources say Feinstein’s reluctance may owe to her close relationship with one of Lynch’s top aides at the Justice Department. During the 2016 campaign, Paige Herwig served as counselor to the attorney general, and after Lynch left the department in January 2017, Herwig became Feinstein’s deputy general counsel. Herwig is now working with Clinton’s former press secretary on a campaign to oppose Trump’s judicial nominees.

Feinstein is also close to Renteria, who worked as a Feinstein staffer last decade.

Feinstein argued that Lynch “would only be able to speak to the Clinton email investigation, which has been investigated ad nauseam, including a 500-plus-page inspector general report that we had a hearing on, so she wouldn’t have anything to add to the committee’s current inquiries.”

Rules, schmules!  That apparently didn’t apply when the mental faculties of Feinstein were out to lunch and she leaked the 312-page transcript of the interview of Glenn Simpson, a former journalist and co-founder of Fusion GPS.

Go ahead, issue the subpoenas and watch the FBI do the same thing the DOJ did concerning Operation Fast and Furious.

Furthermore, isn’t Feinstein and her party wanting to continue the ad nauseum investigation into alleged with no evidence Russian collusion of the Trump campaign?  I say shut that down because nothing has come of it.  Pick up the Hillary investigation and let’s get a grand jury on it to indict her and bring her to justice.  We already know she broke the law.  The FBI has admitted that.