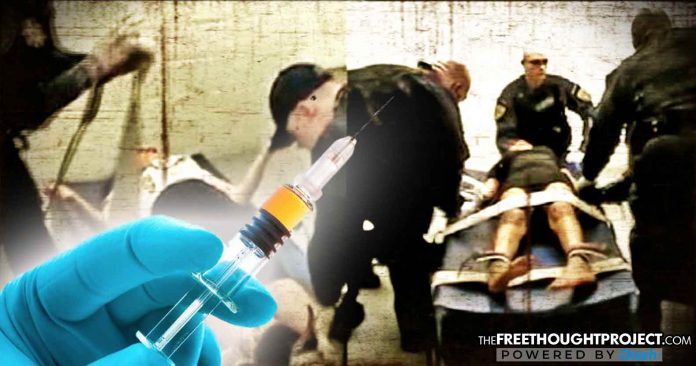 Since the initial story was made public, more details have emerged in the case, revealing a twisted study that has been going on for many years, researching the effects of different sedatives on patients, many times without their knowledge or consent.

This research has been taking place at Hennepin Healthcare, under the supervision of doctors and full knowledge and encouragement from the local police.

The Star Tribune interviewed numerous victims who were involuntarily enrolled in the study, and not made aware of the fact that they were drugged until afterward.

Representatives of Hennepin Healthcare have defended the study, insisting that sedating agitated people can save lives.

According to the hospital, the studies have been approved and do not require consent from the patients because they are “performed in emergency situations.”

“We’ve all seen agitated and confused people just die, and we’re certain we can prevent that. We want to do it the best way possible,” said Dr. James Miner, chief of emergency medicine at Hennepin Healthcare.

Dr. Jon Cole, emergency physician and toxicologist at Hennepin Healthcare made similar statements, saying that, “To us, restraints without a sedative is really bad medical care.”

“Frankly, it’s a big concern of ours. Anytime that we interact with EMS about this, we emphasize to them, crystal clear: In no way is the study ever to increase the number of sedations. We want to observe normal, usual sedation practices,” Cole added.

However, there have been multiple cases where this type of sedation has actually put a patient’s life at extreme risk. Body camera footage from one of these encounters showed a woman begging for an asthma inhaler after being maced by police, but instead, she was injected with ketamine and fully sedated.

According to the initial reports about the incident, an unnamed paramedic told one of the officers on duty that “If she was having an asthma attack, giving ketamine actually helps patients and we’re doing a study for agitation anyway so I had to give her ketamine.”

The report also indicated that “It is troubling that the dictate of the ‘study’ mentioned by the paramedics appears to have played a significant role in the decision to administer ketamine.”

The ketamine did not actually help the woman as the paramedic suggested, but it actually stopped her heart momentarily, before she was resurrected by paramedics.

Ketamine, the tranquilizer that is being used, has been popular in the club scene for years and has recently seen limited therapeutic research and use for a number of psychological ailments, including depression. Despite the fact that it is a “party drug,” Ketamine is an extremely strong dissociative, which can severely impair memory and make it difficult for people to move.

For this reason, the Minneapolis Police Department manual classifies Ketamine as a “date rape” drug, despite the fact that it is a well-known and popular party drug that large numbers of people do voluntarily, on their own free will. However, the fact that the department considers this a “date rape” drug, makes it even more alarming that they are involuntarily dosing suspects with this substance when they have not even been charged with a crime.