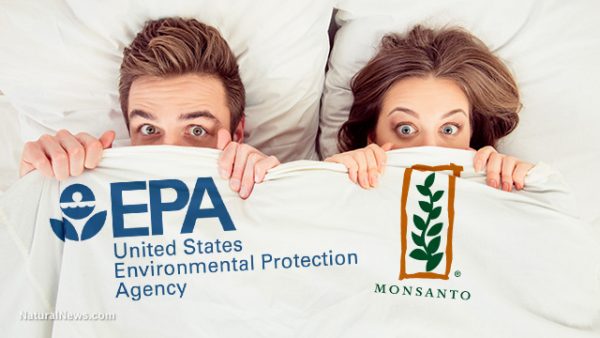 (Natural News) With so much scientific evidence supporting the fact that glyphosate causes cancer, how can anyone still believe that weed killers that contain it, like Monsanto’s Roundup – now part of Bayer – are somehow safe? The answer is simple: The company has the Environmental Protection Agency (EPA) in its pocket, and they’re all too willing to help them cover up damning evidence that their products are toxic.

The EPA is a government agency, and Monsanto knows that lots of people trust authoritative groups supposedly tasked with “protecting” us. It’s been a mutually beneficial relationship over the years, with a recent piece in Bloomberg Businessweek — hardly part of the “alternative media” — breaking down the dirty details of their dealings over the years.

They also called into question the impartiality of the Office of Pesticide Programs. The group is given the final word on whether pesticides are permitted, yet they make their decisions based on the data provided by the pesticide manufacturers themselves! They also happen to get nearly 30 percent of their operating budget from the pesticide industry. Surely there’s no conflict of interest there, right?

The EPA’s paper used a lot of shady tactics. For example, when it came to epidemiological studies that showed glyphosate might cause cancer, they downplayed them by claiming that farmers’ recollection of their exposure to the chemical was unreliable and biased. In a meta-analysis that found trends in data from multiple human studies, they shaved off decimal points from results to make the data showing a higher risk of cancer in exposed farmers less swaying.

In scolding EPA officials at the meeting, University of Arkansas for Medical Sciences Epidemiologist Eric Johnson said: “Every time there’s something positive there, you said there’s something wrong with the study.” Experts who were present also complained that the evidence didn’t match the paper’s conclusion in favor of glyphosate.

When the EPA later reported on this peer review, they didn’t mention the number of reviewers who voiced concerns. They used wording like “some panel members suggested…” to obscure the fact the majority of those present were doubtful.

EPA has long known about the dangers of glyphosate

The EPA has known that glyphosate causes cancer since as far back as the 1970s, according to researcher Dr. Anthony Samsel. Samsel says that studies carried out by New Jersey firm Biodynamics from 1978 to 1980 showed a clear link between low doses of glyphosate and tumor growth in internal organs; the studies were submitted to the EPA back in 1981, who inexplicably decided to label them “not significant.”

Other archived EPA memos that recently came to light showed that they knew glyphosate was harmful, particularly to kidneys. The Inspector General of the EPA, Arthur Elkins Jr., confirmed in May that he is investigating possible collusion between the EPA and Monsanto.

In 2015, the World Health Organization declared glyphosate a “probable human carcinogen,” and the lawsuits have been piling up. There is currently multi-district litigation made up of 310 lawsuits against Monsanto on behalf of cancer victims throughout the nation, and documents exposed in this court case show how Monsanto discredits scientists, pays off journal editors, and uses paid social media comments to try to influence public opinion in favor of their toxic products. How can anyone still believe this chemical isn’t dangerous?

Read Glyphosate.news for frequent news updates on this toxic herbicide.