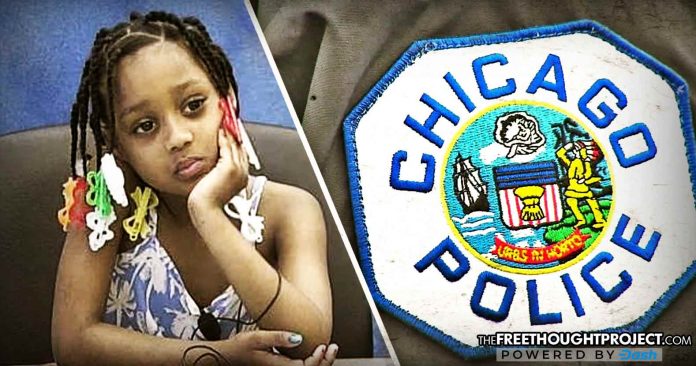 Chicago, IL — This week, the taxpayers of Chicago were told they would be footing the bill—to the tune of $2.5 million—to pay for an excessive force lawsuit that accused police of holding a 3-year-old little girl at gunpoint while beating her handcuffed mother.

The lawsuit stems from a search warrant carried out in the home of Aretha Simmons in 2013. During the raid, according to the lawsuit, the entire family was severely abused and the 3-year-old suffered severe mental trauma — labeled by an expert as “one of the worst cases of child PTSD” he’s seen.

On August 29, 2013, Chicago police executed a search warrant at an inner-city Chicago home in hopes of finding a drug dealer. Cops barged in the home of 3-year-old Davianna Simmons where she lived with her grandparents’ and mother Aretha Simmons. An officer pointed and held a loaded gun at point-blank range to the chest of 3-year-old Davianna, reports The News and Observer.

During the raid, according to the lawsuit, not only did Simmons allege that police threatened her small daughter with a gun, but she said the girl saw police violently shake and strike Simmons and point a gun at the head of the girl’s grandmother.

According to the lawsuit, while officers were searching the home, Davianna saw and heard an officer damaging and destroying her dolls, other toys and bedroom furniture.

Police were looking for an alleged drug dealer identified as Alonzo McFadden—who was in no way related to the Simmons family and did not live there. The entire raid and abuse were due to a mistake on the address on the warrant.

Over the course of the lawsuit, the city produced thousands of pages of documents that led to allegations of perjury. The documents, according to Simmons’ lawsuit show that the officers were never disciplined for their role in holding a gun to the chest of a toddler, beating her handcuffed mother, and assaulting the grandmother as well.

Not until three years after they escaped accountability for their alleged mistreatment of the Simmons family did officers John O’Keefe and John Wrigley — the officers accused of the crimes in Simmons’ case — lose their police powers. However, it was not for their abuse in 2013.

According to the lawsuit, the officers were caught justifying an arrest with false claims that are similar to claims made in the Simmons case. The Bureau of Internal Affairs allegedly sought out the officers’ firings after deciding they lied under oath at a criminal trial, according to a report from Rare.us.

Simmons lawsuit uncovered a systemic problem of corruption and secrecy within the department exposing how the “city has routinely been producing sanitized personnel files” in response to requests for evidence and court orders, according to Simmons’ lawyer.

The settlement comes at a time when the Chicago police department is under fire for using excessive force against children. In fact, a 2017 Justice Department report lambasted the CPD for the horrible way they have treated children. The city was forced to respond to the report by claiming that they pledge to overhaul police procedures and training.

As the AP points out, a lawyer for Aretha Simmons, the girl’s mother, says some police departments in other U.S. cities have embraced far-reaching reforms on how officers should interact with children. Attorney Al Hofeld Jr. says a key element is for officers to recognize that the brains of small children and teenagers process information differently than those of adults.

However, as Hofeld explains, the pledged reforms to the Chicago police department do nothing to address how officers treat children during arrests. In regard to meaningful reform on how to treat children, Hofeld said, “it is not even on CPD’s radar.”

Sadly, as is the case in nearly all police brutality instances, the only ones being held accountable for the brutal tactics of the officers are the taxpayers. Illustrating the widespread problem within the department, Simmons’ settlement is one of several lawsuits settled just this week that total $6 million.

Until the officers themselves are held accountable for their own actions, we can expect this problem to remain the same. As for the little girl, who is now 8 years old, we are told that she will expect a lifetime of therapy for the traumatic abuse she suffered at the hands of Chicago’s finest. No amount of money will ever heal that wound.