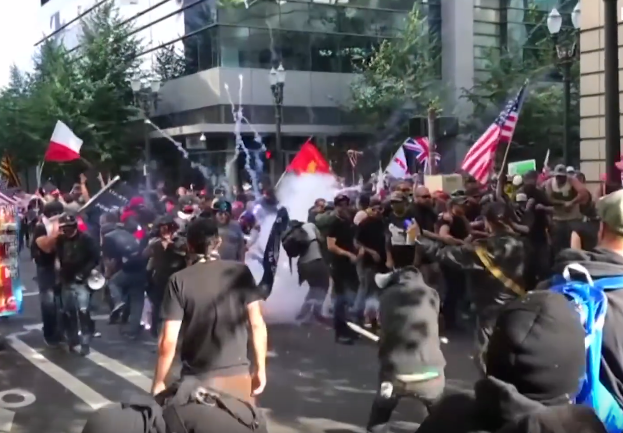 (INTELLIHUB) — Four people were arrested last Saturday after a major clash broke out between members of the the free speech group Patriot Prayer (mostly Trump supporters) and the increasingly unpopular alt-left communist group known as ANITIFA.

It all started when a large crowd of Patriot Prayer protestors squared off in the middle of a downtown street to head of a small collection of the alt-left liberal commies who gathered in a failed attempt to thwart the message of freedom.

Then, just seconds later, an infuriated ANTIFA member tossed a stun grenade into the crowd of Patriot Prayer activists sending shock waves through the group at point blank range from the repercussion.

Police responded to the violence by firing fully-automatic weaponry containing non-lethal ammunition into the angry crowd.

Eventually, police could be heard broadcasting a prerecorded message directed at protesters over a loudspeaker which repeated: “All people must leave the area immediately. Failure to comply with this order may subject you to arrest or may subject you to the use riot control agents or impact weapons.”