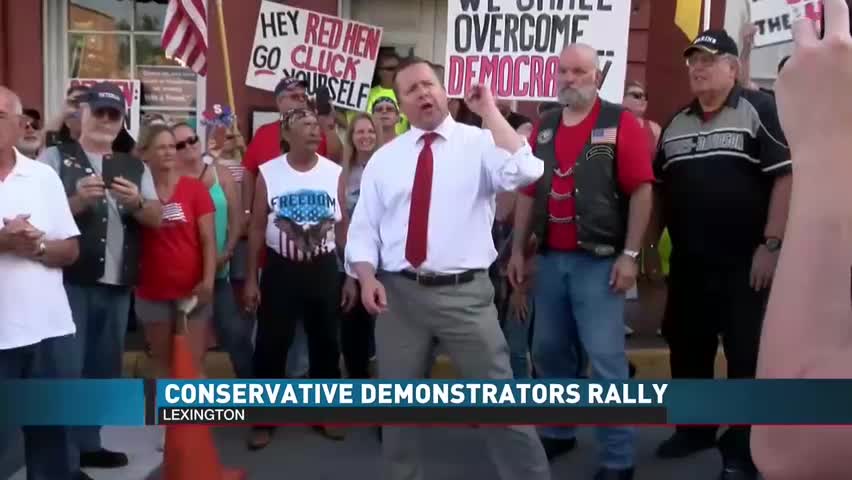 On June 23, Red Hen owner Stephanie Wilkinson, ever the tolerant liberal, kicked Sanders and her party of 8, including her in-laws, out of the restaurant because Sanders is a Trump administration staffer. Not content with publicly humiliating Sanders, the rabid Wilkinson pursued Sanders’ in-laws to another restaurant and organized a protest in front of that restaurant while the in-laws dined inside. Ironically, Sanders’ in-laws are Democrats.

Dozens of Bikers for Trump, including some in cars, joined other motorcyclists for the Saturday evening “Red Hen Ride,” to show support for the president and administration and, as ride organizer Douglas Thompson said, “to have fun.”

As the bikers rode past The Red Hen, a crowd cheered.

The bikers then returned to the Red Hen on foot, and joined a lively street demonstration of hundreds of people, featuring loud chants of “Build the Wall” and “USA” that could be heard well up on Main Street, as well as hand-carried signs, including “The Red Hen Laid a Rotten Egg” and “Red Hen: MLK Weeps”. One man’s T-shirt read, “Proud to be Deplorable”.

There were counter-protestors as well, holding signs “We Support the Red Hen” and “Stephanie Stood Up for the Children. How and When Will You?”. A Red Hen supporter, Susan Mead, wore a red cap proclaiming the Arabic word for America on the front, and “Friend of the Red Hen” on the back.

Many of the demonstrators had come from outside the area, such as a group of five who’d made the three-hour trip from Annapolis, Md., to support Trump, and a family of four from Baltimore who came to Lexington to show their support of the Red Hen.