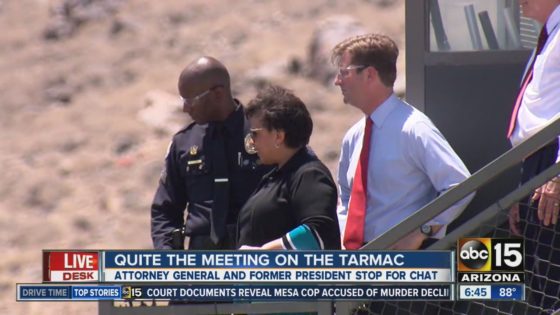 According to a report by the Inspector General (IG) the FBI set up the now infamous Bill Clinton and Loretta Lynch tarmac meeting. Buried in the IG report of the FBI’s conduct during the 2016 election comes the revelation.

On page 203, it’s revealed that the “impromptu” meeting between Bill Clinton and then-Attorney General Loretta Lynch on a tarmac in Phoenix, which was supposedly just a meet up of two very famous Democrats with private jets, was actually set up by Clinton’s Secret Service detail and the FBI.

The 30-minute meeting on June 27, 2016, came just days before the Department of Justice was set to conclude its investigation into Hillary Clinton’s use of a private email server for communications that included classified documents, reported the Conservative Tribune.  Clinton maintained the tarmac meeting was just a standard meeting and nothing in it was important enough for him to postpone his flight for.

“It’s absolutely not true,” he told investigators about accusations he delayed his takeoff to meet with Lynch. “I literally didn’t know she was there until somebody told me she was there. And we looked out the window and it was really close and all of her staff was unloading, so I thought, ‘she’s about to get off and I’ll just go shake hands with her when she gets off.’ “I don’t want her to think I’m afraid to shake hands with her because she’s the Attorney General,” Clinton added.

Basically, according to the Conservative Tribune, Clinton had no idea Lynch was on the tarmac in Phoenix, yet the IG report specifically says he asked to meet with her.  “The Deputy Chief of Staff (for Lynch) said that she had ‘zero knowledge’ that former President Clinton was there before she saw him approach the plane. She stated, ‘And if I had knowledge, I would not have been in that van. I would’ve…stayed on the plane and got everybody off…. No heads up or anything.’