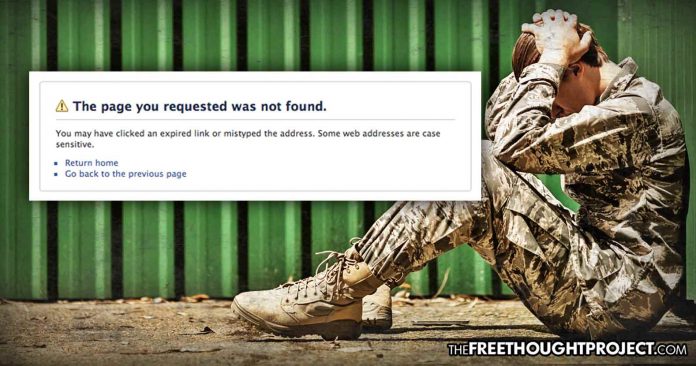 The owners of a Facebook page dedicated to helping suicidal veterans cope with combat stress claim that their page was mysteriously deleted by Facebook with no explanation. The closure is one of the latest from the company, which has been heavily criticized as of late for running a censorship campaign targeting alternative news media outlets (among others) all in a self-professed effort to combat “fake news.”

The page was called “Fill Your Boots UK” (FYB UK) and was created to help veterans deal with post-traumatic stress disorder. Until it was shut down, FYB UK offered a daily “Cry for Help” in which desperate soldiers could reach out for help, many of whom were suicidal. Critics of Facebook’s decision to shut down FYB UK now say those same people will likely go on to commit suicide. Facebook claims the page violated its “community guidelines” but will not elaborate.

FYB UK’s founder, ex-paratrooper Alfie Usher, encouraged other soldiers to rush to the aid of another who issued a “Cry for Help.” Their mission was to help suicidal soldiers get through hard times, much like an Alcoholics Anonymous (AA) sponsor does for alcoholics who are tempted to drink.

Usher said he believes the ban occurred after he and another combat veteran exchanged messages whereby the soldier was contemplating killing himself after learning a few of his soldier buddies had died in a bombing in Afghanistan. After calling Facebook and speaking with the company’s moderators, the decision stood. The company would not lift the ban on the page. Usher told The Daily Mail:

Facebook’s actions have put soldiers’ lives at risk. Guys use the page to express feelings which are really troubling them. They’re desperate for help. It is hard for them to discuss issues relating to their experiences in Iraq and Afghanistan with their families. They’d rather talk with people they meet on FYB UK who have probably experienced the same thing. I tried explaining this to FB but they just ignored me. I don’t think they realize the consequences this (closing the page down) could have.

Unfortunately, we at The Free Thought Project and Police the Police understand all too well how the threat of being shut down has affected not only our pages but others as well. What Facebook is currently doing, and will do if it closes down our pages too, is banning freedom of speech in the private sector. Such a move would deprive individual citizens of being able to share their stories of survival, healthcare breakthroughs, police corruption and police brutality, as well as government-funded schemes to defraud Americans of their constitutional rights. And the list goes on.

TFTP has defended veterans’ rights to use cannabis as a means of dealing with PTSD, has told stories of veterans being able to become weed refugees in states where cannabis is legal, has documented the over-medicating of veterans, and the humiliation and abuse veterans experience when they are homeless.

TFTP regularly documents the experiences veterans have when they come in contact with police. Sometimes those experiences end with veterans being needlessly charged with crimes such as ‘resisting arrest’ when no crime had actually been committed. TFTP also documents the plight of some young people who have been killed by police while working for the police, framed by police who were on a witch hunt, or had guns pulled on them simply for attempting to record police engaged in their duties as public servants.

Our pages have already been banned for weeks on end without explanation and without recourse. Even though collectively, both pages have more than 5 million followers, Facebook’s algorithms have severely reduced our reach by only showing our posts to a small fraction of our audience.

Equally disturbing is the utter disregard Facebook has for the millions of dollars invested by various companies who grew an independent alternative news business model, which worked in partnership with Facebook for decades, without any real issues. It is both sinister and despicable. And it is happening worldwide. Someone must put a stop to it before the little people of the world completely lose their ability to express dissent, or as is the case with the followers of Fill Your Boots UK, they will lose their ability to cry out for help because they are suicidal.

Jack Burns is an educator, journalist, investigative reporter, and advocate of natural medicine,