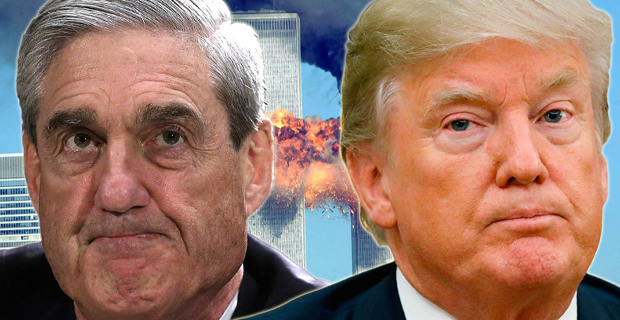 President Trump may be about to drop the hammer on Robert Mueller by exposing his role in helping to cover-up Saudi Arabia’s role in 9/11.

Mueller has been involved in the systematic cover-up of the true circumstances behind 9/11 since day one, which is why he has been a constant roadblock to victim’s families who are attempting to seek compensation from Saudi Arabia for their role in the attacks.

During an appearance on Tucker Carlson’s show last night, attorney for 9/11 victim’s families Jim Kreindler said that rush to war with Iraq meant that the Saudi connection to 9/11 needed to be buried and Mueller was instrumental in making this happen.

This is why the Bush administration allowed prominent Saudis, including members of the Bin Laden family, to leave the country even as flights were grounded nationwide.

He underscored how George W. Bush was “good friends with the Saudi ambassador, who….gave $25,000 to one of the government agents who were helping Hosni and Mihdhar, the two terrorists.”

“There was this huge body of evidence that Saudi government officials prepared for the hijackers’ arrival, helped them, got them money, English lessons, safe houses and apartments, and provided the aid without which it would have been impossible, according to the FBI agents who were working the case, for the terrorists to succeed,” said Kreindler.

The attorney stressed that instead of investigating this story, Mueller covered it up.

“Interrogations were shut down, documents have been kept secret,” said Kreindler, adding that the cover-up continued under Obama and then FBI Director James Comey.

9/11 families are now demanding that the documents related to the cover-up, overseen by Mueller, be immediately declassified by President Trump. Amnesty for all FBI agents who were ordered to oversee the cover-up but can now blow the whistle on Mueller is also being considered.

“There is no reason for thousands of documents that reveal both the Saudi role and our own government’s cover-up for 17 years to be kept secret,” said Kreindler.

Kathy Owens, who lost her husband on 9/11, said that as head of the FBI at the time, Mueller “covered up and stifled the investigation into who was responsible for supporting the hijackers,” and that this would be revealed in documents that are “still being unnecessarily classified.”

As the Washington Examiner reported, former Sen. Bob Graham, D-Fla., who chaired the Senate Select Committee on Intelligence at the time, said Mueller directly intervened to bury any Saudi connection.

“Graham stated that Mueller personally intervened to cut off further inquiry regarding Saudi assistance to the hijackers in California. In an interview with Harper’s from October 2017, Graham stated that Mueller made a series of objections to having terrorist specialist and former FBI lawyer Michael Jacobson visit San Diego to see if there was a possible Saudi connection to the hijackers. When Jacobson discovered that the hijackers were close to an FBI informant named Abdussattar Shaikh, he demanded to speak to him — but Mueller refused and moved Shaikh to an undisclosed location “for his safety.”

Evidence submitted in a lawsuit against the Saudi government reveals that its embassy in Washington may have funded a “dry run” for the hijackings which involved two Saudi nationals living undercover in the U.S. as students who flew from Phoenix to Washington to test cockpit security.

“The court filing provides new details that paint “a pattern of both financial and operational support” for the 9/11 conspiracy from official Saudi sources,” reported the New York Post.