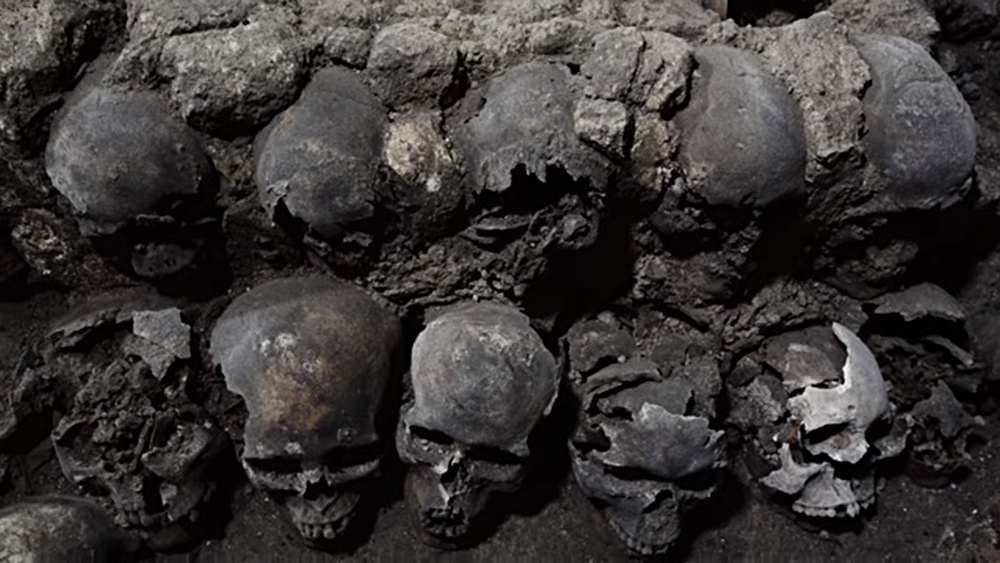 Natural News) A “science journalist” who writes for Science Magazine wants the world to know that human sacrifice is actually a good thing – just so long as it’s done by people with brown skin (never whites!) who claim it as part of their “cultural heritage.”

In a recent tweet about a cover story she wrote for Science Magazine on this topic, Lizzie Wade stated that she’s “proud” to be able to share the news about a recent discovery of the skeletal remains of thousands of people who were sacrificed by the ancient Aztec empire in its former capital city of Tenochtitlan, located in what is now Mexico City.

Expressing far more than just excitement about the discovery itself for archaeological purposes, Wade is attempting to make the case that human sacrifice is hardly “horrific” or “loaded [with] evil” as many of her Twitter critics implied, responding to her glee over the “literal tower of skulls beneath Mexico City.”

Wade tweeted about the need for a “discussion” on the topic, seeing as how she was bombarded with messages from her first tweet declaring that the ancient Aztec Empire “was the most savage & cruel theocratic tyranny in recorded human history. “It raised human sacrifice, slavery & cannibalism to a superstitious misanthropic duty in terror of savage gods.”

This entire statement triggered Wade, who responded with a tweet “storm” explaining her opinions as to why the mass murder of human beings is just another expression of human “culture.”

“Cultures all over the world practiced human sacrifice, and their reasons varied,” one of Wade’s tweets states. “Some offered people in times of environmental stress, some when a ruler died, some ritually killed captives.”

Western racism is responsible for civilized people not understanding the value of human sacrifice, Wade insists

In the series of tweets that followed this one, Wade attempted to whitewash the practice of Aztec human sacrifice by arguing that it was necessary in the minds of the people at that time in order to keep the sun rising and setting every day, as well as to “insure [sic] the existence of future generations of people.”

“This was an absolutely core part of a cosmology and religion that researchers know quite a bit about,” Wade insists.

The reason why it doesn’t make sense to us peons is because we’ve all been raised in “a Western/colonial/settler tradition,” which Wade seems to scorn in her tweet-fest. In other words, if you’re white and believe that murdering other human beings in order to support the “environment” is evil, then you just don’t understand because of your cultural and racial bias.

‘It’s hard for me to imaging that people *wanted* to be sacrificed, but that’s my own biases and cultural conditioning talking,” Wade tweeted further. “How I see the world, filtered through centuries of colonial oppression and destruction, is irrelevant to understanding how they saw the world.”

It’s a lot like how the pro-abortionists of today argue that anyone who opposes murdering children still in the womb just doesn’t understand “women’s rights.” Ridding the world of “human weeds,” as Planned Parenthood founder Margaret Sanger once called them, is just another form of “cultural expression” that people who don’t agree with the concept are blinded from understanding due to their inherent “bias.”

To leftists, murder is no big deal, and neither are eugenics programs and other forms of social engineering that supposedly promote the “greater good.” Abortion is simply a more modern version of Aztec human sacrifice, based around the same concepts of trying to make the world a “better place” from a “unique” cultural perspective.