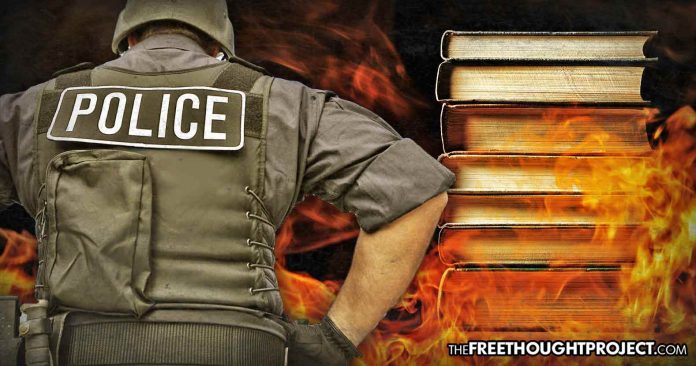 Censorship is a necessity of the police state. Peaceful ideas that oppose the status quo expose the insidious nature of the establishment and are therefore stricken from the public record. This has long been the practice of all empires and it is currently the practice in America today. Case in point: police in South Carolina are attempting to get two books in a school banned because they talk about police brutality and corruption.

The Fraternal Order of Police in Tri-County have made their case public and are demanding that Angie Thomas’s multiple award-winning novel about police brutality, The Hate U Give, on a school’s summer reading list, be banned. The union referred to the book as “almost an indoctrination of distrust of police.”

As TFTP has reported on numerous occasions, all though this book is certainly not “an indoctrination of distrust of police,” the police themselves give society every reason to distrust them.

Another book on the radar of the union to be banned is Jason Reynolds and Brendan Kiely’s All American Boys, which sees a teenage boy trying to overcome his distrust of the police after he is wrongly suspected of shoplifting and then beaten by an officer. All American Boys even features a cop as a protagonist and mentor, yet the union wants it gone.

President of the police union, John Blackmon told local News2 that the union had “received an influx of tremendous outrage at the selections by this reading list.” He then went on to question why the school had chosen to “focus half of their effort on negativity towards the police” when “there are other socio-economic topics that are available.”

But the school is not focusing “half” their effort at all. That is simply not true. These two books are on a list of eight books chosen by the school for summer reading. What’s more, children should be educated on the horrific policies, tendencies, and corruption carried out by police on a daily basis—and it shouldn’t stop at just police. Children should be taught from day one to distrust anyone whose job depends on the taxation of society. It is only the distrust of the state which keeps them in check.

But the union disagrees. Blackmon appears to want kids to be taught how to be properly submissive to police to make them easier targets for extortion—and the only way to do that is to ban books.

“Freshmen, they’re at the age where their interactions with law enforcement have been very minimal,” Blackmon noted. “They’re not driving yet, they haven’t been stopped for speeding, they don’t have these type of interactions. This is … almost an indoctrination of distrust of police and we’ve got to put a stop to that.”

If you don’t want people to distrust police, perhaps you should start by not trying to implement nazi-style censorship of banning books.

Sadly, however, the school is listening. As the Guardian reports, Dr Sherry Eppelsheimer said in a statement that a complaint about the books had been received, and that the school will follow the procedures outlined in its policies. This means a committee will review the books, as well as listening to the perspectives of the complaint filer and the teacher who set the books. The committee will then report to the school superintendent, who will make a decision.

The National Coalition Against Censorship weighed in on the situation and issued a powerful statement in regard to the books. “Removing books that have been selected for their educational value solely because the ideas expressed in them conflict with some parents’ political or moral beliefs would improperly allow parents to dominate the public education process with their opinions,” it wrote. “For young readers in Charleston, The Hate U Give and All American Boys offer insight into the racial injustices many people of color experience, and inspiration for young activists who desire change.”

Both of these books mirror real life scenarios that are carried out on the streets of America every single day. If the police were truly concerned about eliminating distrust they need to start by holding themselves accountable. If police want to improve their image, they need to stop shaking down innocent people of color, they need to refuse to make arrests for an illegal plant, and they need to learn how to stop killing so many people—not ban books.

When cops stop shooting unarmed children in the back as they run away, murdering 6-year-old boys in cold blood, raping women and kids, and calling for the banning of books—then and only then can they start to talk about trust.