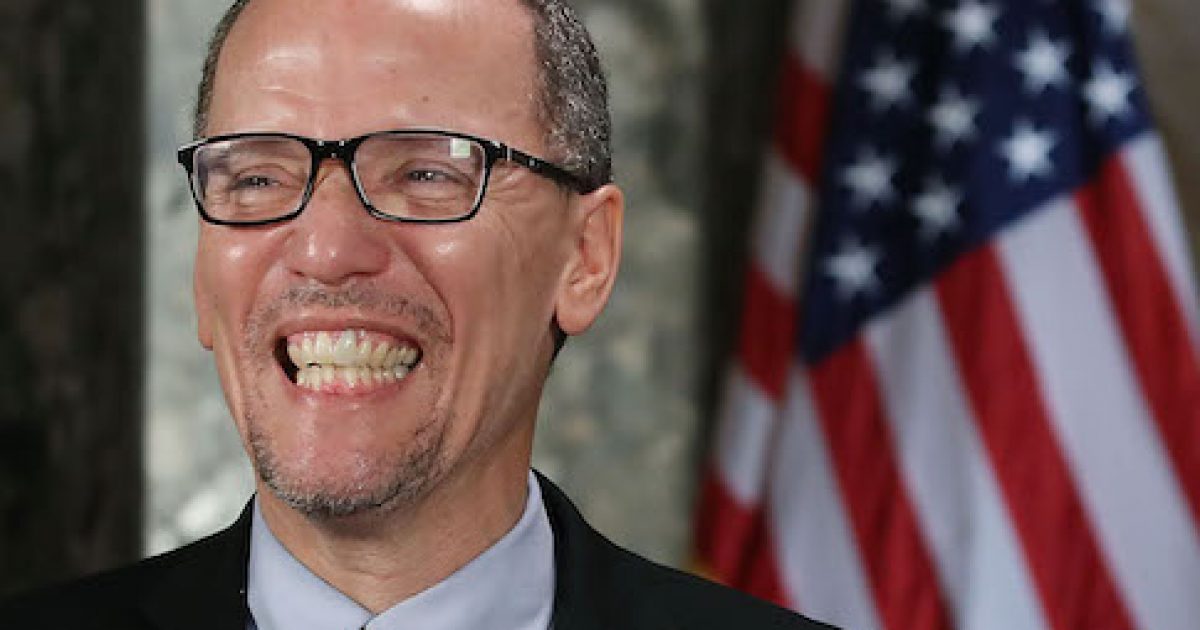 No longer is the Democrat Party hiding their true intentions or direction the party will go. On Tuesday, Democratic National Committee chairman Tom Perez heaped praise upon Socialist Democrat Alexandria Ocasio-Cortez claiming “she represents the future of our party.”

Liberal radio host Bill Press said during a Tuesday interview with Perez that Ocasio-Cortez was able to take out longtime congressman Joe Crowley in the New York primary. Ocasio-Cortez campaigned on abolishing Immigration and Customs Enforcement and guaranteeing health care and housing as basic human rights.

“What’s this tell you about where the Democratic Party is going today?” Press asked.

Perez glossed over Ocasio-Cortez’s socialist policies and instead focused on the fact that she is a woman, noting that his “daughters” were very excited about her victory.

“Well, my daughters — I have three kids, two of whom are daughters, one just graduated college, one is in college, and they were both texting me about their excitement over Alexandria because, you know, she really represents the future of our party,” Perez replied. “She ran a spirited campaign.”

You can watch the interview of Perez by liberal radio host Bill Press below.

In other words, Perez supports the increasing of legalized theft of the American people through the socialist policies spouted by Alexandria Ocasio-Cortex to fund these policies and supports the government acquisition of the talents and knowledge of others to provide for another. Remember, rights come from God; those rights are inherent and unalienable. To guarantee health care and housing as “basic human rights,” the government has to “own” the person who has the talents to provide such, which still does not make those services “rights” but government “forced” enslavement of others. America, Welcome to Socialism, the new face of the Democrat Party.

It’s only natural that Socialist Democrats want to abolish Immigration and Customs Enforcement. More people will be needed as slaves once the democide of American citizens, who will resist their “forced” enslavement, begins. Besides, all socialist governments operate a “papers please” procedure against citizens and non-citizens alike – oops, that should be “comrades and non-comrades.”

But, in order to complete the enslavement of Americans and those here that are not citizens and those that are illegal alien invaders, the government has to confiscate the firearms. With Massachusetts enacting its gun seizure bill and Republican Governor Charlie Baker enthusiastically putting his “John Hancock” to the bill, it is the 12thState to enact such laws and the seventh since the February shooting at Marjory Stoneman Douglas High School in Parkland, Florida.

Republican Gov. Charlie Baker signed a bill on Tuesday allowing for temporary gun confiscation without any due process in Massachusetts.

Bill H4670 enables a family or household member, which includes roommates, relatives or significant others, to remove firearms, firearm identification cards and ammunition from any individual deemed to be a danger to oneself or others.

Surrendered goods can be confiscated for up to one year, with the ability to renew the order, but an individual can try to appeal the ruling.

Baker defended the so-called ‘red flag law’ over twitter calling it a “model for the nation.”

Massachusetts is the 12th state to enact such gun seizure laws, according to Huffington Post. It is also the seventh state to do so since the February school shooting in Parkland, Florida.

The bill also establishes a licensing procedure for stun guns after Massachusetts’ top court deemed in April that banning the weapon was unconstitutional.

How ironic – banning a “stun gun” is unconstitutional but confiscating firearms without authority to do so is not. Only in the minds of anti-constitutionalists and delusional Republican politicians does this make sense. [sarcasm] One can be sure that jilted significant others, those couples going through divorce, and relatives with grudges to grind will not abuse such an unconstitutional law. And, roommates never get into volatile disagreements that would cause such discord as to abuse Massachusetts Bill H4670. [sarcasm off]

This socialist/communist/fascist bill will do nothing to prevent gun deaths because criminals will never follow the law. Who is brave enough to challenge a criminal family member who is a danger to others by confiscating the person’s firearm much less contact law enforcement to do it? Not many; so, it only affects law-abiding citizens. And, since when is it the government’s responsibility to prevent suicide by any means?

While Governor Baker indulges in his delusion that this bill protects an individual’s God-given unalienable right to keep and bear arms – a right protected by the Constitution for the united States of America via the Second Amendment, it does not. But, Governor Baker is confident since Massachusetts police chiefs support this measure.

The Massachusetts process for seeking an order for extreme-risk protection looks a lot like it does in other states that have red flag laws. Once a petition is filed against a gun owner, a judge must hold a hearing within 10 days to determine if that person poses a valid risk. If so, the judge will order the person to surrender all firearms and stay away from guns for 12 months. The subject must turn over firearms ID cards and permits, and will be entered into a federal database barring them from purchasing guns elsewhere.

The Massachusetts law also allows emergency extreme-risk protection orders that can be approved without notice to the gun owner. Under this process,  firearms are immediately removed for up to 10 days ahead of a hearing, where a judge decides whether to extend the order for a full year. [Emphasis mine]

Yep, no chance of abuse there. (eye rolling) Delusional Massachusetts House Speaker and Democrat Robert DeLeo stated, “While Massachusetts already has some of the most effective laws in the nation … it is our goal not merely to be the safest state in our own country. We believe Massachusetts should stand with the safest places in the world.”

Tell us Speaker DeLeo, where are these “safest places in the world”? As the only world sovereign body to recognize keeping and bearing arms as a God-given unalienable right that is to be protected, we are actually the safest place in the world. In South Africa, white farmers are being murdered in order for the government to “steal” their land. In the Middle East and North Africa, ISIS is murdering Christians, Yazidis, Kurds, and non-Muslims or enslaving these groups, if not murdered. In Europe, the indigenous population is beset with horrific crimes against women and mass murders occur using trucks, knives, and the “banned” firearm. No need to mention Sweden since that has been going on for some time now.

Central America is a drug cartel run haven where murders occur as often as one drinks a glass of water. And, in any country, nation or land where citizens are denied their right to keep and bear arms in defense of themselves from tyranny and crime, the potential exists for these citizens to be murdered by their own government. Is there any need to mention the heaviest gun controlled cities in the US where murder rates are increasing because only criminals have firearms? Now, enlighten us where these “safest places in the world” are, Speaker DeLeo; inquiring minds want to know.

Not only does the Massachusetts bill infringe upon rights recognized and protected by the Second Amendment, the bill violates the Fourth, Fifth, and Sixth Amendments. It appears inanimate object mass hysteria is plaguing the weak minded of the united States and politicians, drunk on amassing power, are using that mental defect to attempt to restrict and remove the God-given unalienable rights of citizens. In fact, this is how Socialism, Communism, Fascism, and Marxism begins.

As Nikita Krushshev said in 1954, “First, we will take Eastern Europe, then the masses of Asia, then we will encircle the United States which will be the last bastion of capitalism. We will not have to attack. It will fall like an overripe fruit into our hands.” In 1960, Krushchev stated, “We cannot expect Americans to jump from capitalism to Communism, but we can assist their elected leaders in giving Americans small doses of socialism until they suddenly awake to find they have Communism.”

The old Soviet Union may have fallen; but, Krushchev’s statements are ringing true as we look at the changes that have taken place and are taking place in the US today. No longer does Socialism or Communism hold a stigma to be hidden away. Politicians are now openly campaigning on that oppressive platform and winning in some areas.

America, we have been warned.