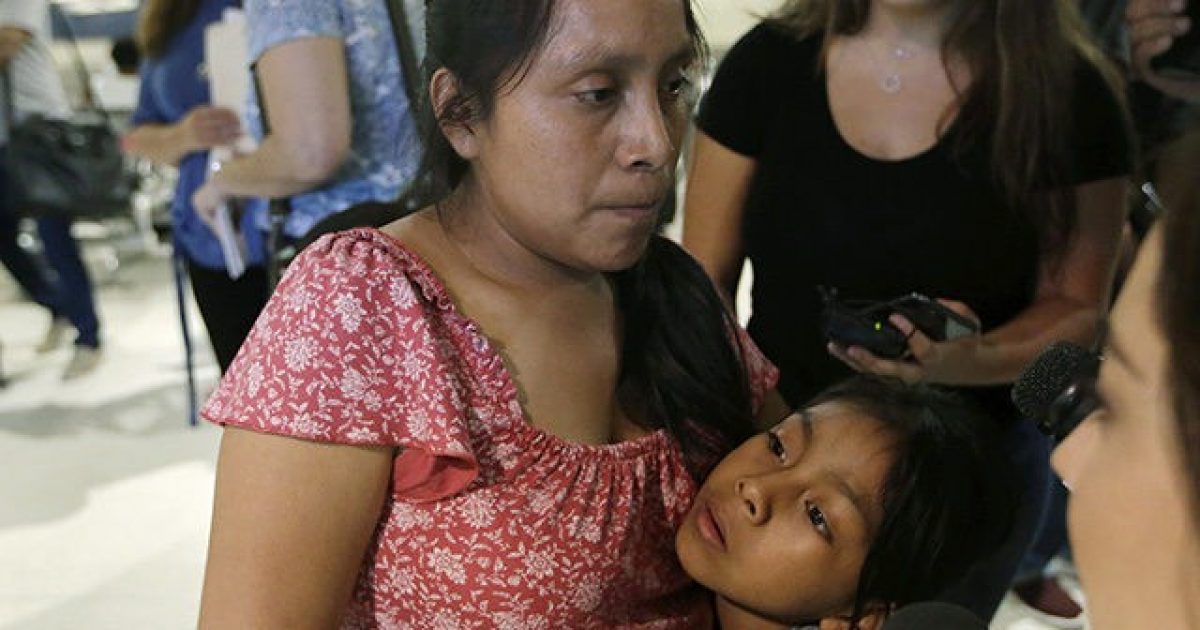 It takes a lot of gall and little brains to accuse united States citizens of “not having hearts” after crossing into this republic illegally and having to suffer the consequences of breaking the law. But, that is exactly what Guatemalan Buena Ventura Martin-Godinez did.

A Guatemalan migrant living in Miami — reunited over the weekend with her young daughter after crossing the U.S.-Mexico border — has a message for asylum seekers: find refuge in another country because Americans “don’t have hearts.”

Buena Ventura Martin-Godinez reportedly entered through the U.S.-Mexico border with her son on May 1, and her husband, along with their 7-year-old daughter Janne Idali Godinez Martin, crossed into the country one week later. Martin-Godinez’s husband was subsequently placed in custody at a detention center in Atlanta, Georgia, while Janne was sent to Michigan.

A 7-year-old girl was reunited with her mom after nearly two months in immigration detention. The mom's message to other mothers: If you're thinking of claiming asylum, find another country: "The laws here are harsh. And people don't have hearts," she said https://t.co/sTQeJtv5XP pic.twitter.com/NVa5kjK8DU

After two months of separation, Buena and Janne were reunited on Sunday at Miami-Dade airport.

“She is asking to never be separated from her mother again,” a tearful Janne told her mother as the two embraced one another, a translator said.

In a statement published by CNN, Buena Ventura Martin-Godinez criticized the Trump administration’s “harsh” immigration policies. “The laws here are harsh. And people don’t have hearts,” the asylum seeker claimed. “People dream of coming here, to save their lives, but I don’t what them to experience what I’ve gone through.”

It appears Ms. Martin-Godinez needs a little education since she has opened her mouth and stuck her foot right in it.

Ma’am, you have a lot of nerve claiming Americans “don’t have hearts.” Since this republic was founded, it has accepted plenty of legal immigrants, with the citizens here welcoming those who were oppressed, persecuted, and maligned with open arms. And, for your information, this republic has accepted many asylum seekers when those who seek asylum follow proper channels and the law. What you have done Ma’am is enter this republic illegally, becoming an illegal alien invader, who is subject to the consequences for their actions. Technically, illegal alien invaders should be turned away at the border or deported back to their country of origin. Don’t like it because you don’t get to stay because you violated the law, then don’t violate the law; enter through legal means.

When other nations suspend legal immigration as Canada has done, along with many European nations, the united States continued to accept those who requested to enter through legal means. Any time some politician in the US mentions halting immigration, foreign government officials, who have zero input into our laws or any weight to their opinion, throw a hissy fit declaring how unfair it is. All the while they reserve the right and discretion to limit or halt others entering their country by legal means. At not one point in the history of this republic has the federal government suspended legal immigration. What this republic does do is enforce laws dealing with illegal alien invaders who are criminals by virtue of crossing our borders illegally. You don’t like the consequences; don’t enter this republic illegally.

If our laws were so “harsh,” as you put it, why did you not stop at Mexico? Simple. Mexico would not have allowed you to stay after crossing illegally to request asylum. If Mexican officials did allow you to stay, you can bet you would be occupying a rat-infested, dirt floor, hot as an oven, three by three by five space with a hole in the ground for a toilet, type cell; in other words, you would be incarcerated in a Mexican jail. Guaranteed you would have never seen your son again; more than likely human traffickers would have been given access to him. The food served would be barely edible and crawling with roaches. Good luck getting clean water that doesn’t make you vomit and give you dysentery. And don’t expect Mexico to supply you with legal assistance to help you get out of their jail – better described as a “straw floored outhouse.” That country doesn’t afford the “due process” of America.

Ma’am, despite what you may think about Americans being without hearts, Mexican officials certainly are. If Mexican officials had hearts, you would not need to travel to the united States; Mexico would have accepted you with open arms on your asylum claim. The truth is, Ms. Martin-Godinez, Mexico chooses to either jail you or ignore you, letting you, your child and others like you suffer at the hands of “coyotes,” suffer the harsh and dangerous environment, and suffer unsavory individuals to violate our laws as you violated Mexico’s immigration law. Or, does “just passing through” even count in your narrow little brain? You know Mexican officials have no heart, which is why you didn’t stop to request asylum there.

In this republic full of Americans you claim “don’t have hearts,” you will receive a climate-controlled clean room with a clean bed to sleep in; plenty of decent food and water; clothes if you need them; free television; free internet; free legal services; and, a multitude of agencies at your disposal to assist you. All of this is courtesy of the American taxpayer, to which you should be grateful, not hateful. Moreover, all of these amenities are privileges, not rights, and if not for the bleeding heart citizens and fringe extreme anti-constitutionalists who share your socialist views and use you for their political gain, the rest of American citizens would have you shipped back to your own country of citizenship.

And, for your 411, enforcing the law is not an act of heartlessness. The united States immigration laws are there for the protection of the citizens of this republic, which you are not. If enforcing the law signifies to you that a group of people “don’t have hearts,” then Guatemala must be filled with all sorts of good-hearted people. It is our laws, Ma’am, that you will appreciate because those laws signify values and principles we hold dear instead of the criminal infested, corrupt, lawless, pitiful excuse of a country you left where values and principles are extinct.

Regardless of what you may hear, read, see or think, you, Ma’am, nor your family, are entitled to anything here in the US. Entering this republic to live is not a human right; it is a privilege bestowed upon non-US citizens by US citizens to those who enter through legal channels. Entering illegally constitutes breaking the law. In a republic where the laws are to be applied equally to all, you are to submit to the consequences of breaking that law. Again, if you don’t like the consequences, don’t break the law.

If you aren’t sure what the difference is between a “right” and a privilege, here’s the simple version. God is the giver of rights that you receive upon being conceived. Government bestows privileges that can be revoked at any time at the government’s discretion. Learn the difference, Ma’am.

When an American citizen breaks the law, that citizen is separated from his or her children. If the individual is a single parent, well, that child is taken into custody by the State until the State can place the child with a relative or in a foster home. Isn’t it better to separate the child from an incarcerated parent or should the child be incarcerated as well? Take it from someone who has worked in the prison system, children should not be incarcerated or detained with a criminal parent.

You claim “people come here to save their lives.” Can you not say the same thing about Mexico? The answer is no, you can’t. The drug cartels are busy murdering any and everyone including politicians. Mexico is riddled with corrupt politicians, lawlessness, corrupt law enforcement, and crime. Plenty of people come to the US to “save their lives” but do it through legal immigration channels. The US has 17 embassy/consulate locations in Mexico where you were welcome to stop and request asylum. But, you and your husband chose instead to break the law with children in tow. To repeat, if you don’t like the consequences, don’t break the law.

Let’s be clear Ms. Martin-Godinez. Homeless American citizens, many who are parents with children to boot, suffer through worse conditions than you will experience being detained for entering the US illegally. That, Ma’am, is a travesty. America’s homeless will never receive the government handouts that you will, which is probably why you came in the first place – a free ride. But, it’s the American taxpayers who “don’t have hearts” that provide the services you are about to receive and that are clearly a violation of our Constitution. Oh, you’re welcome.

Better wake up Ms. Martin-Godinez. If certain people in this republic have their way, there won’t be a free republic for you to slink off to enter instead of calling forth the fortitude and courage to change your own country for the better. Freedom is not free; it was bought and paid for in this republic by the blood of American patriots. Guaranteed, if the time should come for a price to be paid to continue freedom and liberty here in this republic, you and your family will slink off somewhere else instead of standing to fight for what has been given to you by proxy, claiming asylum to “save your lives” in another land that provides benefits without you exercising any responsibility. It is individuals such as you, Ma’am, who do not appreciate what you are to receive in this republic. If you did, you would realize it is through genuine heartfelt empathy for the oppressed, the persecuted, and the down-trodden that legal immigration has never been suspended by the people here. And, it is why illegal alien invasion is frowned upon by the citizens who are forced to foot your bills.

So, before you judge the hearts of Americans and accuse us of not having one, best look around you, learn some history and open your eyes to what those who “don’t have hearts” truly look like.