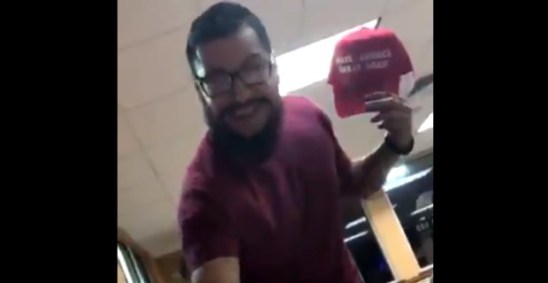 A man was fired after he was caught on camera stealing a MAGA hat and throwing a drink in a teen’s face.

The clip shows an individual later identified as 30-year-old Jimenez Kino saying, “You ain’t supporting shit nigga!” before he throws the drink on 16-year-old Hunter Richard’s face and then exclaims, “Bitch ass motherfucker!”

“This is gonna go right in my fucking fireplace, bitch,” Kino added as he walked away waving the distinctive red Trump hat.

Disturbing video of young Trump Supporter having his MAGA hat stolen and a drink thrown in his face.

The civility of the Left on full display… https://t.co/gUzBVRpP7X

Richard claimed he also had his hair pulled during the assault, which took place in a Whataburger in San Antonio on Tuesday night.

Thanks to 4chan, the culprit was almost immediately identified and his employer was contacted.

Rumble, a bar in San Antonio where Kino was employed part time, subsequently issued a statement confirming that they had fired the employee because his actions go against what they stand for as a company.

“Rumble has, and always will be, a bar that is as inclusive as any establishment could possibly be. THIS BAR IS A SAFE SPACE FOR EVERYONE! No matter your race, creed, ethnicity, sexual identity, and political stance, you are welcomed here!” said the statement.

Police are currently investigating the incident, which occurred just over a week after Maxine Waters and others on the far-left encouraged anti-Trump agitators to confront Trump administration officials and supporters in restaurants.