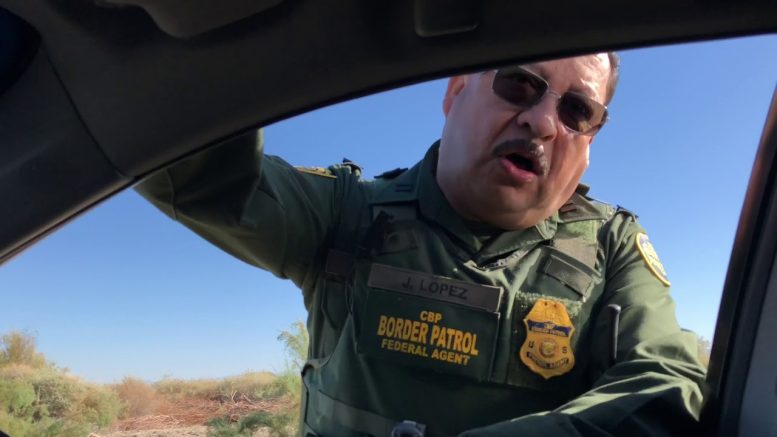 A Mexican Border Patrol officer, Joel Lopez, impersonated a police officer and pulled over a Mexican Doctor, Christian Hernandez, an hour within the border without a radar detector present in his vehicle, claiming the man was speeding during what he claimed was an “immigration inspection.” Subsequently, Hernandez claims that he just passed him on the highway when the federal agent followed him and he started recording.

“Border Patrol following me after I pass them..,” the video opens up.

The abhorrent and shocking video of power abuse was published July 2nd, which shows Lopez pull over Hernandez,  claiming he was speeding doing 100 MPH and was “endangering the public” with his “reckless driving.”

“How are you doing today,” the two men greet each other.

“Sir I am just going to tell you I am recording you,” Hernandez tells the “officer of the law.”

“Yeah well, I am also gonna tell you, your fucking(?) endangering the public,” Lopez says.

“Do you have a radar detector sir?,” Hernandez asks the police officer, (border patrol agent).

“I have a GPS sir,” Lopez retorts in hilarious response.

Lopez then questions whether Hernandez has any identification on him, further acting as a law enforcement officer after likely illegally and falsely pulling him over.

“Why? You are border patrol you are not Highway Patrol J. Lopez, I am a U.S. citizen. Am I being detained?” Hernandez responds.

“Yes, you are sir, for reckless driving,” Hernandez returns.

“Yes sir, I am a federal agent sir, do you have a driver license on your sir or some form of identification on you,” Lopez questions repeatedly.

“Let me see it please,” Lopez asks the man.

“Why do I have to show you identification, am I being detained?,” Hernandez asks Lopez.

That’s when Lopez starts questioning Hernandez’s immigration status, because of Hernandez’s refusal to give him his ID.

“You are Border Patrol,” Hernandez repeats.

“What is your immigration status sir,” Lopez protests.

“We are about an hour into the border guys,” Hernandez speaks to the video.

“By law I don’t have to tell you who I am,” Hernandez states.

“By law which law? Are you an officer,” Lopez retorts.

That’s when the men start arguing back and forth, about his identification and the law and Hernandez states that Lopez is going to be on YouTube.

“I am telling you who I am Hernandez,” retorts Christian Hernandez.

“Why do you have to see it,” Hernandez asks Lopez after falsely being detained.

“Because I don’t know who you are?,” Lopez says.

“Do you want to be on your way sir?,” Lopez questions Hernandez.

“Really?,” Lopez shrugs off and “who’s going to see that,” he adds.

“J. Lopez guys, a Mexican holding a Mexican U.S. citizen because he claims I was speeding and he says he’s on Highway Patrol when he’s really on Border Patrol amazing!,” Hernandez says.

“You think your recording is going to scare me off,” Lopez tells Hernandez.

“No, no this is what the U.S. is gonna see they’re gonna see,” Hernandez says.

Lopez then walks away and then comes back and asks once again for Hernandez’s identification. And then it takes a turn for even more comedy, Hernandez questions Lopez why he is pulling him over.

“Why are you fucking pulling me over dude,” Hernandez angrily responds.

The response is priceless it goes from speeding doing 100 mph to “you’re acting like you’re violating immigration law.”

Finally, after some more back and forth arguing, Hernandez does eventually hand over identification to  Lopez proving he is a doctor and has patients to see. Hernandez was later approached in the video by a real police officer. The full video is below.

As a Border Patrol agent, Lopez’s vehicle is equipped with a license plate scanner according to the DHS so Hernandez could easily be known to him. Still, he questions the man for his identity instead of confirming the man’s identity he gave him by his license plate, which that database would show Hernandez’s driver license picture and information stored by the DMV.

Lopez might want to consider really becoming a law enforcement officer or a Highway Patrol officer because the U.S. Department of Homeland Security (DHS) wants to develop advanced facial recognition technology that can scan the faces of travelers as they enter and leave the U.S. border on highways and that might put him out of a job.

The proposed program would allow Homeland Security to maintain a database of everyone who leaves and enters the U.S. that would now include pictures taken by A.I. surveillance cameras at every border checkpoint. The program is designed to catch foreign nationals who have “overstayed their welcome” as well as help “identify potentially dangerous individuals.”

Ideally, that system would allow Customs and Border Protection agents to scan people’s faces, even if they’re wearing sunglasses, hats or are looking away from the camera, without requiring them to slow down or exit the vehicle.

Last year the EFF called for a public end to the biometric border screening program, listing 6 reasons why to kill the technology identifying key problems.

The President’s executive immigration order on January 27th — best known for suspending visitors to the U.S. from seven majority-Muslim countries — also included an article expediting the biometric exit program. The order further stated that there will be three progress reports to be made over the next year on the program. Trump’s executive order in March built on that specifically limiting biometric scans at the border to “in-scope travelers” or those who aren’t U.S. or Canadian citizens.

This is an absolutely disgusting display of not only power abuse by an individual but a grand example of authoritative positions of power merging. A Border Patrol agent doesn’t have the authority to pull someone over for speeding, at least not to this writer’s knowledge of the law; the agent also couldn’t prove it as they aren’t equipped for the job, without radar detectors that can log a person’s speed.

This court case if it materializes will be one to watch as it will determine whether a Border Patrol agent can pull over a U.S. citizen for speeding. If it turns out that it’s ruled a Border agent can pull over someone, their vehicles will need to be equipped with radar detectors that show the speed someone is traveling.

However, currently what it shows is an authoritative figure that doesn’t know the law in its present form acting as an officer of the law to coerce a man into giving up his identity because he suspected he was an “illegal” human being with the excuse he was “speeding.” The irony of all this is just that they are the same nationality.

Happy “independence day” America! It’s the rise of the police state! Hernandez should have asked for Lopez’s badge and then pointed out one more time that it says Border Patrol agent, not Sheriff, not Highway Patrol, not Police Officer or Constable but BORDER PATROL.