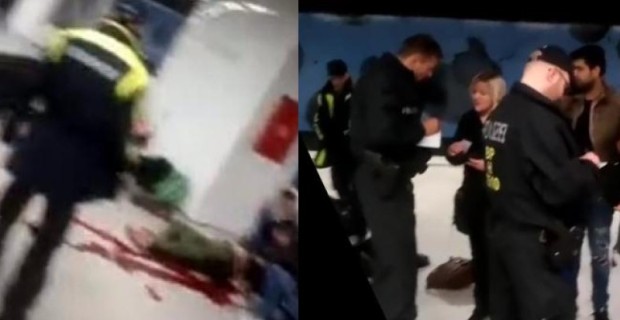 Authorities in Germany tried to cover-up the brutal murder of a German woman and a 1-year-old baby girl in Hamburg by an illegal immigrant from Niger by raiding the apartment of the man who posted a video of the incident online.

On April 12, 33-year-old Mourtala Madou stabbed his German ex-girlfriend, identified as Sandra P., and their one-year-old baby daughter, Miriam, at a Hamburg subway station. The woman’s 3-year-old son was also a witness to the carnage.

A gospel singer named Daniel J. who arrived at the subway moments after the attack and filmed the bloody scene on his phone witnessed that the baby had been almost or completely decapitated.

It subsequently emerged that Madou, whose attack was motivated by losing a custody battle, had been making threats against the woman and her baby for months but police didn’t take them seriously. A judge also revoked a restraining order Sandra P. had taken out against Madou, after which he directly threatened her, “I’m going to kill our daughter, and then I kill you!”

A blogger named Heinrich Kordewiner who found the video on Daniel J.’s Facebook page uploaded the video to YouTube, which then made him a target for authorities.

“A few days later, a team of state prosecutors and officers of the cybercrime unit of the Hamburg police arrived at Kordewiner’s apartment with a search warrant, and confiscated his computer, mobile phone and other electronics, allegedly to find “evidence” of the “crime”. He was — and still is — accused of: uploading the video,” reports the Gatestone Institute.

Kordewiner and his flatmate told Gatestone about the raid, which took place at 6.45 a.m. They recounted that when they first refused to open the door, police forced it open — and even searched the flatmate’s room, although it was apparently not covered by the search warrant.

“The police officer said that he could also search for SD (secure digital) cards,” the flatmate told Gatestone. “While he fumbled through the books on my shelf, he suggested that he could turn my whole apartment upside down. He told me to relax.”

Kordewiner was accused of having “invaded the private sphere” of the murder victim, an obscure and barely used law that has been criticized for jeopardizing freedom of the press. Daniel J.’s home was also raided by authorities.

Ulf Bornemann, head of the “Hate and Incitement” department of Hamburg’s public prosecution office and also part of the team that raided Kordewiner’s apartment, defended the law for having helped tackle, “hate crime in social networks.”

The implication here is that Kordewiner was committing some kind of hate crime by posting the video of the murder scene because it showed migrants in a bad light.

The stated reason for the raid — a breach of privacy rights — is flimsy. Only the victim’s feet can be seen in the video, and even those for only a brief moment. As the daily newspaper Hamburger Abendblatt pointed out, the footage “is blurred, taken from a distance and doesn’t allow the identification of any person.”

Meanwhile, the German publication Welt online posted a video that shows close-up footage of the victim — something that did not spur state prosecutors into action. The main difference between the two videos seems to be the verbal comment on the beheading in Daniel J’s video. The alleged breach of “privacy rights,” then, would appear to be a pretext.

In summary, authorities likely used a flimsy pretext to raid both the man who filmed the footage and the individual who posted it online to send a message to other German citizens and to oversee a cover-up of what happened, specifically in relation to the child being beheaded, which authorities still refuse to confirm.

The video has now been deleted from all German websites and YouTube channels.

“If it was indeed the authorities’ plan to censor the news and keep the information of the beheading under wraps, then it backfired. Due to the reports about the raid, thousands of people have seen the video, and hundreds of thousands have heard about the botched censorship attempt. Even worse for the would-be censors, they unwittingly revealed the very detail that they wanted to keep from the public,” writes Stefan Frank.

Attempts by the anti-immigration party Alternative for Germany (AfD) to confirm whether or not the child was beheaded were rebuffed when Hamburg’s government, in breach of its constitutional duty, refused to answer, while also blacking out large sections of a report about the murders that related to the beheading.

Hamburg’s ministry of justice concluded its investigation by declaring, “the double murder is a crime of passion that must not be of any interest to the public.”

The entire story underscores the Orwellian state that Germany finds itself in whereby the country’s huge and growing problem with migrant crime is being swept under the rug and citizens who dare draw attention to it are being tracked down and persecuted.

According to new figures from the German Federal Criminal Police Office (BKA), migrant crime targeting German citizens has soared by over 23 per cent in a single year.

As Reuters acknowledged earlier this year, Germany has suffered a “two-year increase in violent crime,” rising 10 per cent in 2015 and 2016. 90 per cent of that increase was attributed to “young male refugees”.

As we previously reported, in 2015 Germany’s top public broadcaster ZDF said that they would self-censor when reporting on migrant crime because, according to editor in chief Ina-Maria Reize-Wildemann, “We don’t want to inflame the situation and spread the bad mood. [The migrants] don’t deserve it.”

As we document in the video below (which is banned in Germany), rather than directly address the multitude of problems that importing around 2 million “refugees” has caused the country, German authorities appear more intent on brainwashing and coercing their population into accepting the new reality with passive compliance.