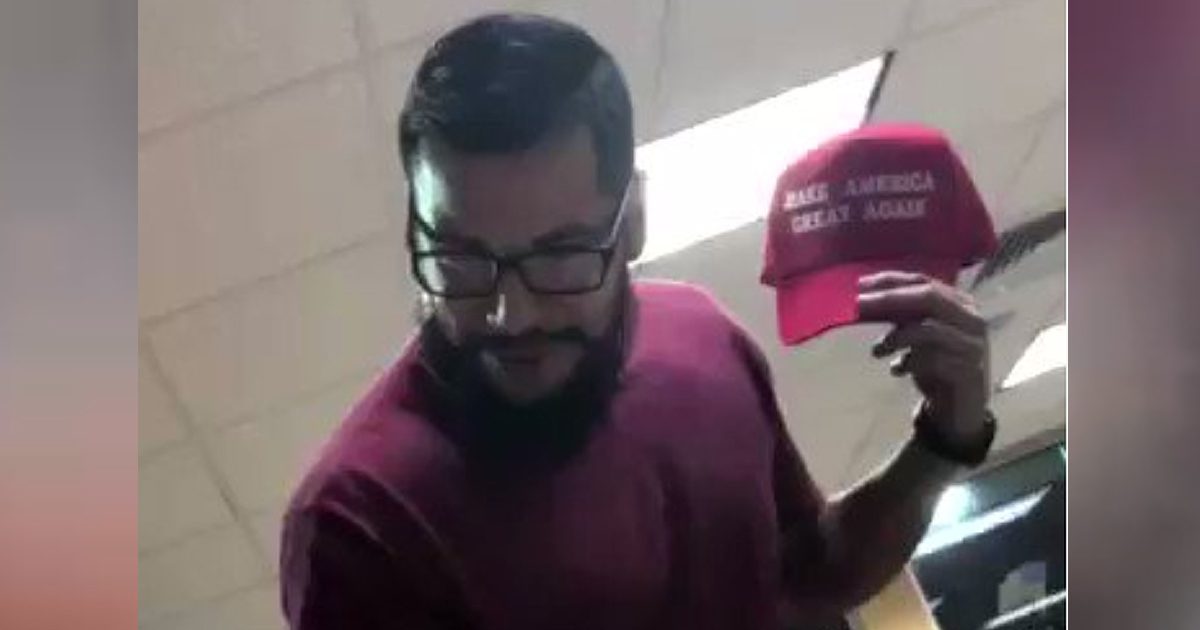 This is what I’ve been talking about. Felony theft is the only charge in this matter?  He stole a hat!  Where are the assault charges?  Yet, 30-year-old Kino Jimenez, the man who, unprovoked, went up to a teenager, threw a drink in his face and grabbed his hat, yanking out hair with it and walked off with it uttering profanity, was arrested and charged with… felony theft of a hat.

Kino Jimenez was arrested on Thursday after he assaulted teen Hunter Richard at a San Antonio Whataburger and stole his hat.

According to records, Jimenez is charged with felony theft, and has a bond set at $5,000.

Jimenez has already been kicked out of the Communist Green Party and been fired from his job.  That’s a good start, but this criminal deserves justice.

Heavy provided photographic evidence that this is not his first encounter with the law.

Here’s his new mugshot, according to the Bexar County Jail. In it, he appears a lot more clean-shaven than he did in the viral video:

Here’s what you need to know:

Jimenez Was Arrested by Detectives With a Robbery Task Force, Police Say

Jail records show that Jimenez was arrested and booked into the jail on the evening of July 5, 2018. According to San Antonio police, “This evening detectives assigned to the Robbery Task Force were able to locate the suspect in the ‘Whataburger’ incident. Warrant #1653732 was issued for the suspect Kino Jimenez 30 years (Sid# 905396). The aforementioned warrant is for Theft of Person. Kino Jimenez was located in Universal City, Texas. Universal City police officers took Mr Jimenez into custody without incident.”

The above photo is a 2017 mugshot of Jimenez, according to Bexar County. Here’s a 2016 mugshot for him that the jail had on hand:

Calls and emails to San Antonio Police Department to obtain the nature of Jimenez’s previous arrests have not been returned as of the writing of this article.

Heavy also pointed out in another post that he has been busy deleting his “anti-Trump” posts from social media.

If you think this is justice, consider that Efrain Gutierrez, 38, is charged with aggregated theft after stealing more than $10,000 in panties from Victoria’s Secret and had his bond set at $15,000!  He didn’t even assault anyone!

While Hunter had not recovered his hat, there were some people who wanted to not only supply him with a new one, but have it signed by President Donald Trump.

“If someone can get me this young man’s information I’ll get him a new #maga hat… SIGNED by #potus!!!,” Donald Trump Jr. tweeted Thursday night.

.@DonaldJTrumpJr came to the defense of the boy who had a drink thrown in his face and MAGA hat ripped off his head by a grown man in a TX restaurant.

Brad Parscale, Trump’s 2020 campaign manager, added, “I would love to send this teenager a signed @realDonaldTrump hat and stand with him in #SanAntonio. There are hundreds of thousands that will stand with you there. Don’t let a few left bullies stop you from showing your #MAGA!”

I would love to send this teenager a signed @realDonaldTrump hat and stand with him in #SanAntonio. There are hundreds of thousands that will stand with you there. Don’t let a few left bullies stop you from showing your #MAGA! @FoxNewshttps://t.co/nTC3HcnfaE

Of course, Whataburger chimed in that they don’t condone the behavior, but there was no one in the restaurant that addressed the issue and from the video, it’s clear Jimenez caused quite a disturbance.

“We were shocked to see this video and certainly don’t condone this type of customer behavior in our restaurants,” Whataburger told Fox News on Thursday. “To be clear, no Whataburger employees were involved or witnessed the incident, and we ask that questions be directed to San Antonio PD as we continue supporting their efforts.

Jimenez’s family members told Fox 29 that they do not condone the behavior in the video, but that some of the information that has spread on social media is false. Family members said they felt as if their safety was in question as rumors spread, with strangers approaching their house (where Jimenez no longer lives).

Well, perhaps they should have dealt with him a long time ago, maybe even in a biblical manner, you know, like Jesus spoke about (Matt. 15:1-9).

Once let out, unless his heart is changed by the Gospel, Jimenez will only escalate his crimes until one day it won’t be just stealing a hat, uttering profanity and tossing a drink in a young boy’s face.  And before you think me too harsh, this is a 30-year-old man who should know how to control himself, but doesn’t.  If you want to defend that and “light” punishment for such a person, go ahead, but remember you are only helping to harden him in his criminal mindset.