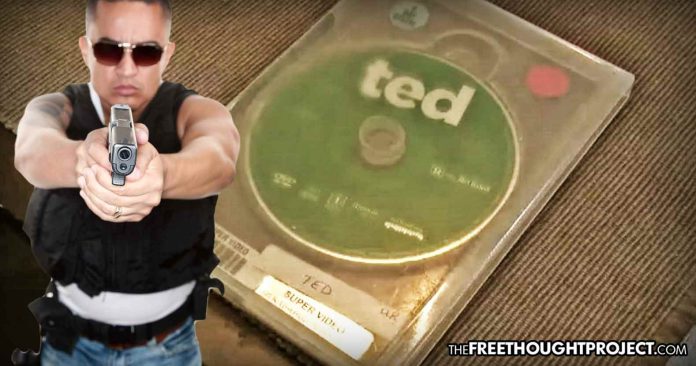 Tulsa, OK – A man who never returned the copy of the movie “Ted” he rented for $5 from a local store in 2014 was contacted by police and threatened with jail time if he did not pay the hefty fine that has accumulated over the last four years.

Lonnie Perry said he vaguely remembers renting the movie, watching it and then forgetting to return it—but he became homeless around that time, and he believes the DVD copy of “Ted” was just another one of the possessions he packed into a box when he moved to a neighboring town.

The local store insisted that it tried to reach out to Perry multiple times, but when they could not contact him, they turned the case over to the Rogers County District Attorney’s Office and listed the DVD as “stolen property” that must be returned.

The local news apparently had no trouble finding the man, and in an interview with ABC 8 in Tulsa, Perry said he was shocked when he received a letter from the DA notifying him that he could face jail time if he did not pay the $218.07 fee for the movie rental.

The fact that is even more incredible is that out of the money Perry owes, the movie store will only receive a small portion—$19 for the movie and $25 for “lost profits”—while the DA will receive $174 as part of “a state statute that deals with unreturned movies,” according to the report.

“I just don’t have that kind of money right off. I’ll get it, and I’ll pay it. I’ll do what I have to do. I just think it could have gone a different route,” Perry said. “I understand the video place having to do what they’ve got to do. There’s other means of trying to get a hold of people without a warrant.”

In response to reports about the fines and jail time Perry was facing over a $5 movie rental, a local handyman company, Jeff of All Trades, stepped in and paid all of the fines Perry owed.

Unfortunately, this is not the first time an incident like this has happened. Around the time that Perry was renting his copy of “Ted” in 2014, a woman in Pickens County, South Carolina, was forced to spend the night in jail for failing to return the VHS copy of the movie “Monster-in-Law” that she rented in 2005.

The same treatment is also applied to library books, and as The Free Thought Project has reported, a couple in Tecumseh, Michigan, was treated like criminals after their daughter rented a set of books from the local library and failed to turn them back in for eight months.

Although the books were eventually returned, and the couple paid hundreds of dollars in late fees in an attempt to solve the matter, they were forced to appear in court in 2016 where they were both charged with larceny of rental equipment, and faced up to 93 days in jail and more than $500 in fines—all for late library books.

In yet another case, a mother in Victoria, Texas, was notified in 2017 that she was also facing time in jail for late library books after she moved and did not receive any of the late notices from the library. She said she lost the books, but instead of simply facing a lost item fee of $21.75, the mother of four was informed that the fines have accumulated and she now owes $748.98—and she could spend time in jail if she does not pay the ransom.

While individuals who rent movies from stores and books from libraries do so with the agreement that they will return the products or face late fees, the idea that they would be forced to spend time in jail, and to pay hundreds of dollars in fines, raises serious questions about the purpose of the system.

Is it really worth it to waste time, money and resources searching for and prosecuting the mother who forgot to return her child’s library book or the homeless man who lost a $5 DVD rental, when there are violent crimes to be investigated?