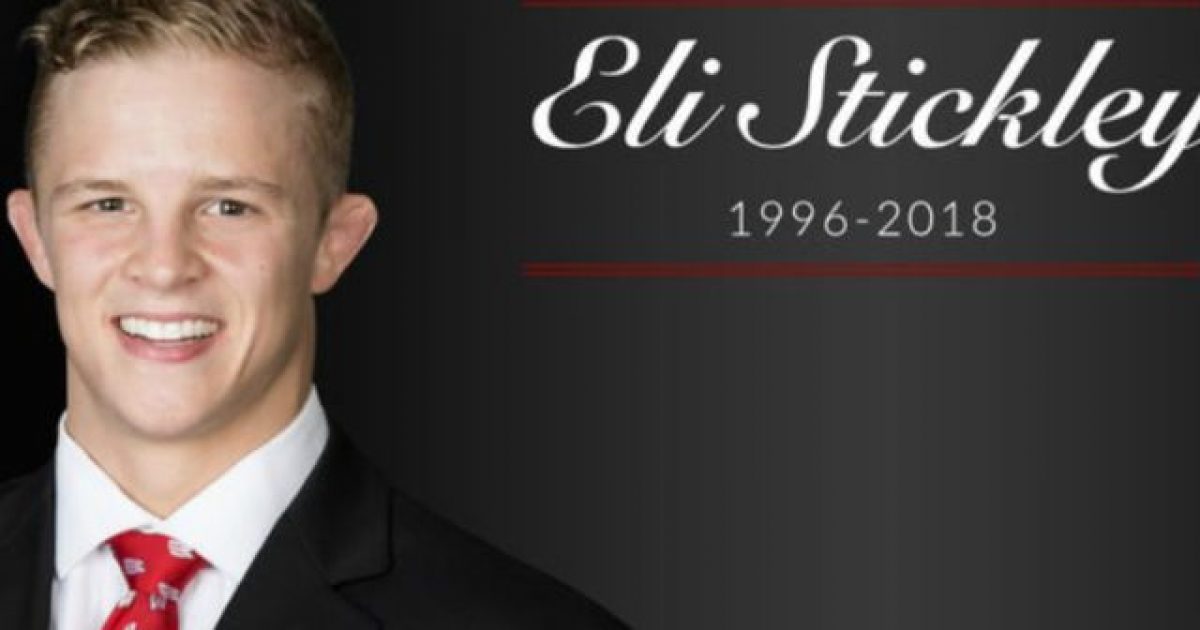 Rep. Jim Jordan (R-OH) has come under attack this week after grilling Deputy Attorney General Rod Rosenstein.  Those attacks have grown louder in the past couple of days and now news has broken that his 21-year-old nephew has been killed in car crash.

Eli Stickley, who was a University of Wisconsin wrestler and a former state high school champion in Ohio in 2014, died in a car crash on Thursday evening in Illinois.

According to Indiana State Police, Stickley was driving a black 2004 Nissan Frontier, headed west on Interstate 74 in Henry County. The Nissan left the road into a right-hand-ditch, overcorrected and rolled across the westbound lanes of traffic.

Stickley and a passenger, who was not identified, were taken to Illini Hospital in Silvis, where Stickley was pronounced dead.

“Stickley’s uncle, Rep. Jim Jordan of Ohio, won two national championships at Wisconsin and was a three-time All-American — and remains the school’s all-time wins leader. Jordan’s son, Isaac, wrapped up his own All-American career in 2017 wrestling alongside cousin Stickley.”

Following his death, the UW wrestling team posted a statement on the team’s Facebook page:

“Our hearts are heavy today. The entire Badger Athletics family extends its most heartfelt condolences to the family and friends of junior Eli Stickley, a student-athlete with our wrestling team, who passed away last night. Our thoughts and prayers are with Eli’s family, friends, teammates and coaches.”

While tragic, the death of Stickley also comes at a time where it cannot be simply dismissed as coincidence.

As Tony Elliott reported on Thursday, Jordan seems to have come under attack after pressing Deputy Attorney General Rod Rosenstein over Rosenstein’s refusal to turn over political sensitive documents on Robert Mueller’s investigation.

Just days later, Rep. Jim Jordan was named by Ohio State wrestler Mike DiSabato as having known about the alleged abuse of athletes by Dr. Richard Strauss, who was the team physician from the mid-1970s to the late 1990s, an accusation Jordan quickly denied.

Jordan, who was the assistant wrestling coach at Ohio State from 1986 to 1994, says he had no knowledge of abuses during that time.

Anyone with an IQ above moron can see that this accusation involving Jordan in this 20-year-old incident is payback from Rosenstein over Rep. Jordan’s hard-line demand for evidence. Even something that should be more alarming to the American people is the distinct probability that Rosenstein is digging up dirt on every Representative who is demanding proof from him.

While everyone waits on Rosenstein to turn over what documents he has, he is spending this time trying to find anything negative he can on every lawmaker who has demanded answers from him. By threatening these lawmakers with possible career ending dirt, he hopes to blackmail his way to an easy end of any demands made by Congress.

Indeed!  It appears that Rosenstein was attempting to get the spotlight off of himself and that has largely worked in the state-controlled media, but is the eath of Jordan’s nephew simply a coincidence?  Many think not.

While Politico reports of a “cesspool of deviancy” concerning Jordan, he has denied the claims.  Frankly, that doesn’t mean much in the world of politics, but so far, there has been no evidence of wrongdoing on the part of Jordan.  Furthermore, one has to wonder why nothing was said before.  Why wait until now?  That was the point of Elliott’s article.

However, I can’t help but wonder in the back of my mind if the death of Mr. Stickley is not somehow related to the attack on Jordan.  Call me a conspiracy theorist, that’s fine.  I’ve been called it before and in many instances been proven right.  In either case, considering the calls for violence from Democrats like Maxine Waters, one cannot just think this is a coincidence.