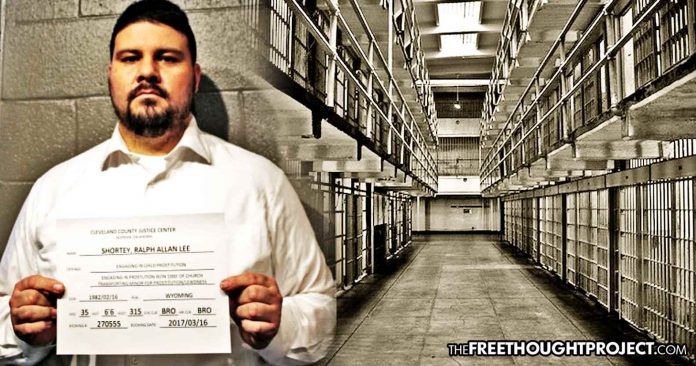 Moore, OK — Over a year has passed since Oklahoma state senator, Ralph Shortey was busted for child sex trafficking and now, on Friday, he’s finally been scheduled for sentencing.

In September of 2017, Shortey was accused in a federal indictment of multiple counts of child sex trafficking and child pornography offenses. In November, Shortey agreed to plead guilty to a single child sex trafficking charge in exchange for the three other charges to be dismissed. He now faces a minimum of 10 years in prison but could be sent away for life.

Court documents filed in the United States District Court for the Western District of Oklahoma show that the disgraced two-term former senator will face a sentencing hearing at 10 a.m. Sept. 5.

The age of consent for sexual activity is 16 in Oklahoma. However, it is against both state and federal law for anyone under the age of 18 to be involved in the commercial sex industry.

As a result, anyone who prostitutes a minor under the age of 18, like Ralph Shortey, can be charged with either child prostitution or trafficking in minors — thus the charge of child sex trafficking.

In the body camera footage, Shortey appears dumbfounded as he is caught with the underage boy in his room.

The officer then asks, “What do you mean, ‘Okay’?”

“I didn’t know that,” replies Shortey.

“Can you show me that he is only 17?” Shortey says in the video.

Ironically, and in poor taste, the senator was wearing a t-shirt referencing the Bible scripture Ephesians 5:22, which refers to wives submitting to their husbands. Under the scripture was the phrase, “Now go make me a sandwich.” Shortey was known as the “family values” senator.

“Mr. Shortey feels this is a necessary step in putting this painful and humiliating ordeal behind him, for both himself, his family and for the state of Oklahoma,” Shortey’s attorney Ed Blau said.

Below is the video of this “painful and humiliating ordeal.”

After the federal grand jury meeting in Oklahoma City returned their four indictments, Shorty, 35, originally pleaded not guilty. He wiped away tears as officials read out his child sex trafficking and child pornography offenses. However, given the evidence against him, as detailed in the graphic federal indictment, Shortey’s attorneys likely knew he had no grounds for a not guilty plea.

Despite being caught in the act at a Super 8 motel room in Moore, Oklahoma, Shortey was released after agreeing to a series of stringent conditions including wearing an ankle monitor and having his computer monitored.

As TFTP previously reported, the charges came after Shortey was busted in a motel room in March of 2017 with an underage boy.

The investigation was launched when the teen boy’s parents called police after finding disturbing text messages between him and their son. When police began their investigation into the texts, they found Senator Ralph Shortey in a motel room with the boy.

As KOCO 5 reported at the time, police obtained a search warrant that was served during the investigation. Using the search warrant, police said they found the juvenile’s Kindle Fire tablet that contained conversations between him and Shortey pertaining to sexual activities in exchange for money. The tablet was seized as evidence.

During the raid on the hotel room, the boy admitted to selling weed to Shortey in the past and said he had known him for about a year. When police searched the Kindle found in the room, they found evidence of Shortey attempting to solicit “sexual” stuff from the underage teen.

Police also noted that they smelled marijuana and found a backpack with a bottle of lotion and condoms, according to the report.

Showing the bipartisan nature of sex abuse among the political elite, Shortey was also the state chair of President Donald Trump’s campaign during the primary elections. He was known as a “family values” conservative.

Sex abuse among the political elite knows no party line and those who attempt to use the abuser’s party affiliation for political gain do a disservice to the victims and guarantee no solution to the horrific problem. Sex abuse is rampant on both sides of the aisle and it exists from the lowest ranking cop all the way to the president.

Shortey resigned only weeks after the scandal began to unfold and he maintained his innocence despite the horrific child pornography found on his devices. According to News Oklahoma,

The federal grand jury accused Shortey in the first child pornography count of using his smartphone in October 2013 to email a video of a man engaging in sexually explicit conduct with a prepubescent girl.

He is accused in the second child pornographic count of using his smartphone that same month to email sexually explicit videos of young boys.

He is accused in the third child pornography count of persuading the boy he later took to the Moore hotel to send him an inappropriate picture.

He is accused in the child sex trafficking count of soliciting that boy in March to engage in a commercial sex act. The boy is identified in the indictment only as “John Doe.”

Since he was elected in 2010, the senator has led a secret double life, according to the indictment. For over seven years, through a series of fake names and fake email addresses, Shortey dealt in child pornography and began soliciting minors.

As news Oklahoma reports, federal prosecutors revealed in a court filing that the investigation found Shortey communicated “with numerous individuals, many of whom appear to be underage boys.”

In just under two months, we will see if the state is willing to hold this child predator accountable for his crimes.